Welcome to the first in the weekly series of the Weddings, Parties, Anything* columns. If you would like to read the introduction to these columns, please click here. 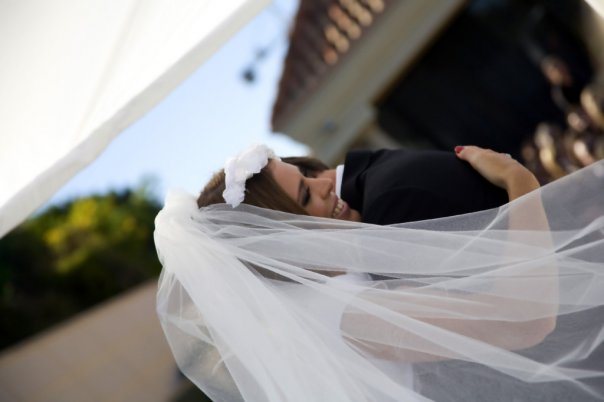 I’ve discovered the third biggest and most popular question that faces any impending bride.

‘Have you got the dress?’

The first most common question is, ‘When are you getting married?’ And obviously so. The second? ‘Where?’ And the third, with almost more pressing importance than the others, is always about the dress.

Remember the scene in the Sex and the City film when Anthony and Charlotte are sitting on the edge of Carrie’s bed and Carrie nonchalantly declares that she has found the dress for her wedding to Mr. Big? Remember how the squeals of excitement from Anthony and Charlotte were quickly dissolved when they saw it – a vintage two-piece suit. I thought it was rather beautiful. Anthony, however, muttered in disbelief, ‘The Bride wore a dress by…no one.’

That’s the thing about dresses; everyone wants to know where you got it and who it’s by. And everyone has an opinion. I’ll tell you where I got mine, but I won’t tell you who it’s by – yet. That’ll have to wait until after the wedding – I can’t give all my secrets away.

I only found my dress a month ago. Even though I’ve been engaged for a year and a half. Even though there’s only four and a half months until my wedding. I’d browsed and perused and looked but nothing out there caught my eye. It was all very samey.

One day, whilst trawling the Internet, I discovered a gorgeous dress. I loved it, instantly. It was different, but still traditional. I tracked down a stockist for it and confidently booked an appointment to try on the dress of my dreams. And then I tried it on. And I hated it. It sat funny and felt cheap. Because it was. What the Internet had failed to tell me was that the ‘silk’ it was made from was actually a fake – some disgusting mix of polyester and who knows what. It also failed to mention that it was made in China. And that it sucked. Big time.

It was on my travels one day that I flitted into Brides of Melbourne and saw a dress that caught my eye – it didn’t look particularly spectacular but something made me want to try it on. And when I did I fell in love with it. It was timeless, classic, elegant and stunning. And made in Australia. Out of real material that didn’t feel cheap. I ordered the dress to be made instantly. There were no other questions that needed to be asked – it looked good, felt good, and I knew it was right – and that’s all that mattered to me.

The biggest surprise for me was the difference in cost between my beautiful Australian made gown, and the one made in China – and the surprise was that there wasn’t really one at all. My gorgeous dress cost $250 more than the dress made in China. Considering the quality of my gown, the way it sits perfectly right and the way it feels, $250 is nothing at all. I was actually outraged that the gown made in China was priced as it was – because, seriously, that’s a lot of money for a pile of cheap crap. My gown will take 3-4 months to make, the one in China will take 6 months. My gown supports an Australian designer and business, the one made in China does not. You do the math.

There were two things I found most amusing about the dress process – the first were other people’s sincere stress at the need to drop everything and find one straight away – because apparently the world will end if you don’t find a dress a good six months before your wedding. The second was the process itself.

Most bridal stores will encourage or require you to book an appointment for a dress fitting – and it’s good that they do. You want (and need) the one on one time with not simply a sales assistant, but an alterations specialist and a professional to help with trying on gowns. They are big and complicated and they need an instructor. Most of all, you want to ensure that the person is solely yours when you’re trying on gowns, not running between you and others. Full undivided attention is your right.

What some bridal stores do, and this is what I find amusing, is not even allow you to view their collection without so much as an appointment. Here’s what: if I can’t even see what you have, chances are I’m not going to want to book an appointment to try your gowns on.

And then there are the sales assistants. I encountered some terrors. Women so highly strung and downright awful they made the gowns they were selling seem ugly and nasty. Thankfully, the ladies at Brides of Melbourne are incredible – so incredible they made the whole experience magical. So much so that I took my niece there to get fitted for a flower girl dress. They are complete pros – real and honest and helpful. Just my kind of people.

I’m glad I’ve found my dress – I admit it’s a relief to have such a big item ticked off the to do list – and realistically, leaving it too late is never a wise idea, but most of all I’m glad I’ve found something gorgeous that suits me – without any external pressure.

Being able to answer the third most common question is also pretty neat too.

*Weddings, Parties, Anything were an Australian indie folk rock band formed in 1984 in Melbourne, that continued rocking until 1998. Their name came from The Clash song Revolution Rock. I’ve decided to use it as the name for this weekly column because I was born in Melbourne in 1984 and love Australian indie folk rock. And I’m having a Wedding, Party, Anything in 2010.

So pleased darling girl – I am very excited for you!

Oz Crawl claims to be Australia's funniest board game - and they may very well be right. Quintessentially Australian,...
© Onya Magazine 2009 - 2021
Back to top