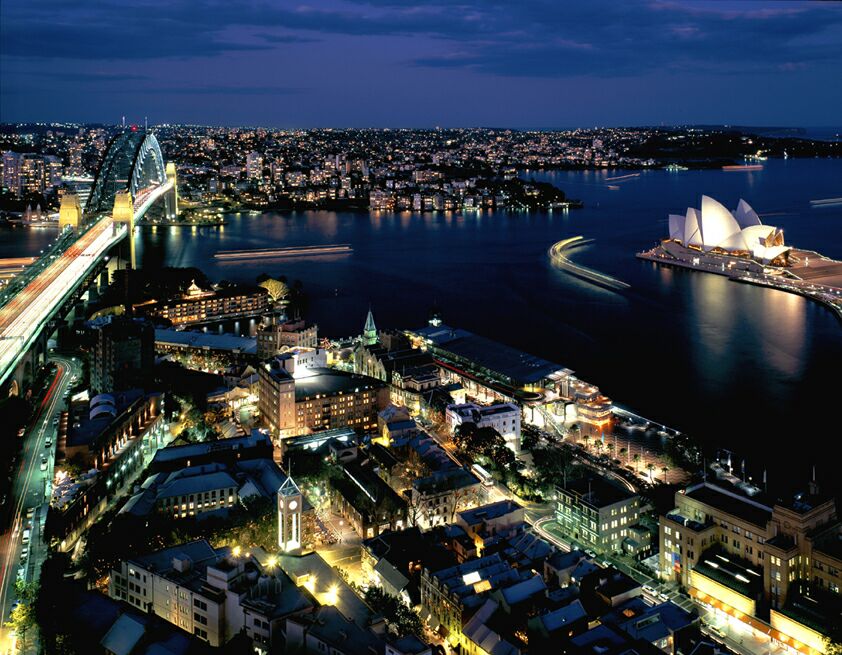 Five world records. One mission impossible accomplished in Sydney; one of the best cities in the world.

Tom Cruise, eat your heart out. I have applied to the Guinness Book of World records for the most impossible missions accomplished. I had to set air, land and sea records; sleep under the same roof as royalty and then beat the world’s elite sporting best.

This was no easy assignment and I scoured the world to see where this could be achieved and I suddenly saw I could attempt the lot in one of the best cities in the world: Sydney. It was recently voted to have the world’s best climate and friendliest people. So Sydney it was.

So to the air record first. I needed to get to Sydney from Christchurch without delay. It’s just about impossible these days to depart and arrive on time. So I picked Australia’s national carrier, Qantas. My flight QF46 took off and landed on time – just about a world first these days. They gave me a special slip that whisked me from my seat to the arrival hall in record time. Mission accomplished, thanks Qantas.

The next step was to find somewhere to sleep, under the same roof as royalty. I scour the papers and lo and behold find out the King Juan Carlos and Queen Sophia of Spain are in town, and naturally they are staying at the best hotel – the Shangri-La in The Rocks area. The Shangri-La was recently voted one of the world’s best hotels for food by readers of the Conde Nast Traveller magazine. 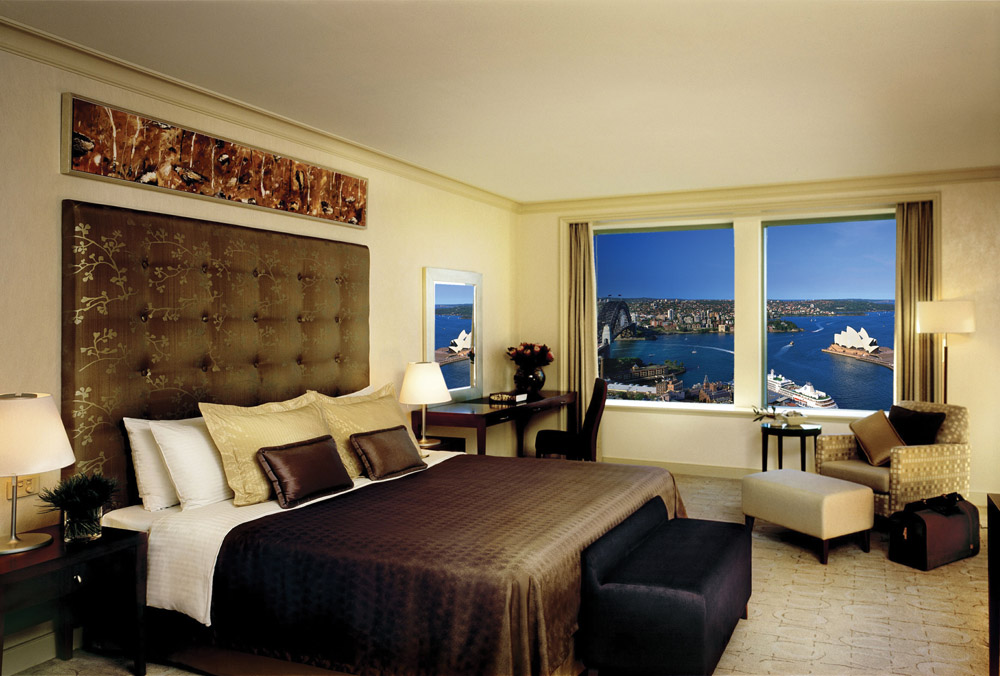 Above: A room at the Shangri-La in Sydney

This is the place where Cindy Crawford, Sophia Loren, Sean Connery and Dick Chaney want to sleep at when they are visiting. Carlos and Sophia have an entourage of 209 people with them, a bit like the Spanish armada, but with 563 rooms in the ‘house’ I’m still given one of the best rooms looking slap bang out at the great Sydney Harbour Bridge and the majestic Opera House.

I put my charming but ruthlessly-efficient hostess Sandy Folder to work. Sandy has one of the 480 hotel staff sort my bags while we have coffee. I ask her to find the most famous elite sports people in the country so I can take them on at something, like squash. We scour the papers to see who’s big in sport. Top cricketer Andrew Symonds is off the front pages but has gone walkabout; swimmer Ian Thorpe has submerged. Betty Cuthbert, Yvonne Goolagong and Dawn Fraser are just the names of boats these days. But then Sandy finds Robbie Deans is in the headlines more than most for lifting the Wallaby rugby weights. ‘Go find him Sandy’, I tell her.

The next day I begin a serious training regime so I can launch into my world land speed record. I aim to get from Darling Harbour to the Opera House – from one end of the city CBD to the other – faster than the fastest Aussie Holden on the road. Luckily, Tonia Davis from Tourism New South Wales leaves me a brochure about Bonza Bike tours. I have a plan. I wander from my hotel down the steps through the Nurses Walk to the Bonza people and tell them what I need. I meet cheerful Carmen Pop behind the bike desk. She used to be one of Holland’s top tennis players and is now settled in Sydney helping hire bikes. She gives me a map to Darling Harbour and I can guess my way from there to the Opera House. I’m unfit and over-weight but my wheels are pounding the pavement faster than any car as I fly around a bike track – no red lights – and get to the steps of the Opera House faster than any car. Mission accomplished. 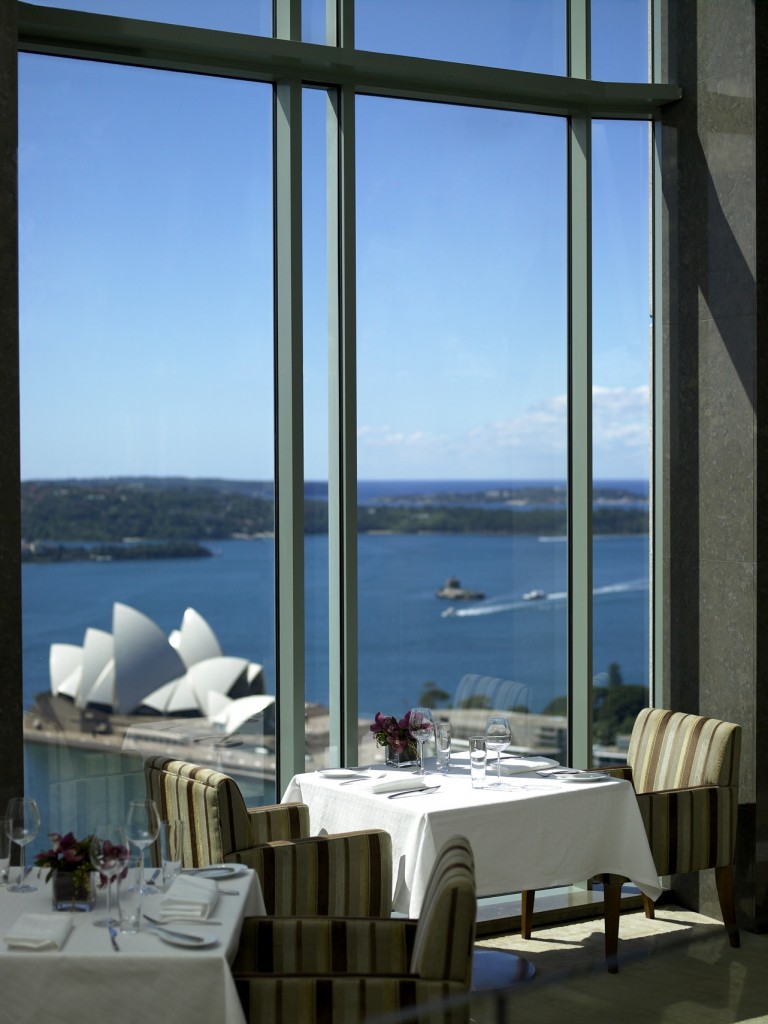 Back at the hotel Sandy says my squash game with Robbie Deans is booked for a high noon showdown tomorrow. I need to carbo-load so I head to the Shangri-La’s Altitude – the highest restaurant in Australia and the closest to the Harbour Bridge. I don’t see Juan or Sophia or any of their 209 people about so I go ahead and order roasted quail breast, pressed pheasant and squab terrine with foie gras and herb crusted barramundi. I return to my room tired from all the training; sip a glass of the award-winning Marlborough Spy Valley sauvignon blanc and gaze out my window in wonderment at the view.

I’m nervous the next morning as I munch on mushrooms, poached eggs and hash browns. I need to be more aero-dynamically faster and trimmer. I book into the best hairdresser in town Christopher Hanna and look much thinner on top. Deans turns up at the hotel almost on time which is a record in itself I’m told. We head to the courts at the Sydney Football Stadium which has been the venue of some great moments. This is where George Gregan’s last second match-winning tackle on Jeff Wilson gave the Wallabies the Bledisloe Cup in 1994. Argentinean soccer player Diego Maradona played here for a World Cup qualifier in 1993. Now Deans and I face off in a squash match. He is the best squash player in Australia (when he is umpiring with his own rules). He gives me the first set but says he has just come from a big luncheon. Excuses. At 17 to 16 ahead in the fourth, he shakes my hand and says game over. I say the real rules are to win by two points. That’s it, he says, but for me, it’s mission accomplished; I win according to my rules. No wonder he is the best and most popular rugby coach in the world; he outfoxes most people, but not me.

Exhausted, I get back to my hotel and send a note to Juan and Sophia to say I’m too tired to dine with them or any of their 209 people tonight; but we do sleep under the same roof. Mission accomplished.

Day three dawns in paradise and I have one record to set. I want to become the 14 millionth passenger for the year to ride one of the Sydney ferries. The shimmering waters of Sydney Harbour take me to Watson’s Bay, Neutral Bay, Lavender Bay, Darling Harbour and back to Circular Quay. I set the record. Phew. All missions accomplished.

But I’m left scratching my heads. Circular Quay – it looks rectangular. The 50-storey Australian Square is round. Interesting.

I celebrate with a pint in The Rocks that night – though Scotch on the Rocks sounded better. I’m at the Hero Of Waterloo which claims, along with others, to be the oldest in town. But it has some eerie reminders of Sydney’s convict past. One the wall is a pair of shackles, used by guards to chain up convicts so they could enjoy a beer on the way back from a government project while keeping a ‘close eye’ on their prisoners through large cracks in the floorboards. Also, in the cellar is a lockup with a trapdoor which has a reputation as the beginning of many unlucky patrons’ entry into a new career, by way of a tunnel that legend says ran down to the wharves down at Walsh Bay. Patrons who got too drunk would get a knock on the back of the head, a boot down the cellar, temporary incarceration in the lockup, followed by being smuggled through the tunnel, and shanghaied onto a waiting clipper.

The next morning I head to the airport at 5am to get my Quantas flight, which has been a proud supporter of the Wallabies since 2004. I have the last laugh seeing the irony in choosing Qantas to secure one of my world records. A sequel is in the making…

Images thanks to Shangri-La, Sydney.

I really like your article Kip…and I can really hear your ambition shining through your words.

By The Sieger Gals Mission: Find an exclusive hangout. Find an event fresh and quirky enough to leave us wanting more....
© Onya Magazine 2009 - 2020
Back to top