The Perfect Weekend in Daylesford

The perfect weekend away requires a few quality ingredients: informal accommodation, indulgent eateries and relaxing activities guaranteed to help you unwind. Fortunately for Melburnians the spa-town of Daylesford provides all this and more just over an hour’s drive away.

Nestled in the Macedon Ranges in Central Victoria, Daylesford and the neighbouring settlement of Hepburn Springs developed as gold-mining communities in the 1850s. Today the region is more notable as Victoria’s premium spa destination, foodie-Mecca and country-town of choice for alternative lifestyles. The result is an easy mix of rural charm and rainbow flags fragranced with mineral salts.

For the Queen’s Birthday holiday weekend we stayed 3 nights in a converted church just north of Hepburn Springs in the hamlet of Franklinford. Constructed as a non-denominational place of worship for the local farming community the church became a holiday residence after it was gutted by fire in 1996. One large open living space accommodates a fully stocked kitchen, 2 mezzanine-level bedrooms and a wood-burning heater. The owners have retained a number of original features, including the pulpit, pews and stained glass windows, though these are now complimented by more modern luxuries. The result is an entertaining and occasionally chilly rural hideaway. 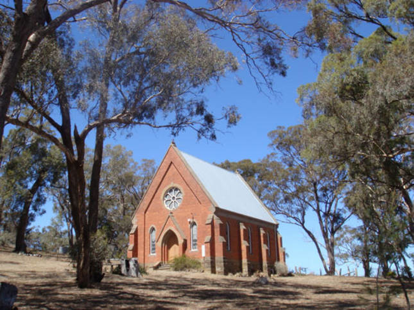 The catalyst for the trip north was the opportunity to eat at one of Victoria’s most venerated restaurants, the Lake House. The creation of chef-proprietor Alla Wolf-Tasker, the Lake House has long held Two Hats in The Age Good Food Guide and is often credited with one of the finest wine-lists in the country. Wolf-Tasker’s philosophy is simple: if it isn’t sourced locally and in season it isn’t on the menu. As we dined in early winter, the menu reflected the changing seasons with game, root-vegetables and squashes in abundance. The degustation, cosily renamed “a menu of small tastes” is introduced with a note from the chef about how much of the produce is locally sourced and how positive this is for a community still suffering from the aftermath of the summer fires. A night of culinary highlights was topped by the Meredith chevre tortellini with roast pumpkin crumble, accompanied by a 2008 Sutton Grange Fairbank Viognier. The Lake House requires a stomach and a wallet with equal capacity, but the experience is reassuringly flawless with attentive service, thoughtfully constructed menus and a Sommelier with a refreshing lack of condescension. The only criticism I can offer is that the dining experience perhaps lacks the element of theatre one might come to expect from a restaurant of such quality. 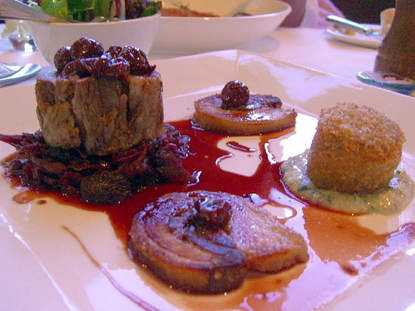 Sunday provided an opportunity to put gender stereotypes to the test as I played golf in the rain while The Wife invented new words for ‘bliss’ during a total-body spa treatment. The range of spa activities in the area is extensive but The Mineral Spa at Peppers Hepburn Springs has the award rosettes on the wall – usually a good sign. The treatment provided was a Dreaming Journey and used Aboriginal healing techniques to provide therapeutic treatments to the body, head, face, hands and feet. The results were so profound that The Wife actually underwent a spiritual awakening – of the capitalist kind – realising that if she could afford it, she could enjoy this level of attention on more than just the occasional stolen weekend.

For abandoned husbands Hepburn Springs golf course provides a hospitable and picturesque sanctuary. Quiet, lush and tree-lined, the course is immaculately maintained. The drawcard though (particularly for anyone looking to entertain golfing holidaymakers) is the presence of easygoing Kangaroos throughout the course. 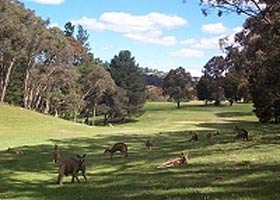 The final day of the break was spent exploring the region’s vineyards. The road from Daylesford to Malmsbury is dotted with small boutique producers who have produced an accessible tourist guide for the enthusiastic amateur. A notable mention must go to Big Shed Wines who not only offer free tastings of their 10 strong list but practically force you to do so. The length of time savouring the increasingly excellent produce led to ever-deepening conversations with the curious hostess. By the time we left, our viticulturalist had confidently predicted Armageddon by 2050!

With that in mind we embraced the local knowledge of our Taxi Driver, Papa Serge, and headed for The Farmers Arms where we were promised the best pub-food of our lives. And you know what, he was probably right. The Farmers Arms is one of those rare nuggets of pure gold in the hospitality industry. A genuine local pub catering to local customers, retailing locally brewed beer and locally produced wines – all with a level of excellence worthy of a far larger audience. In Honeypots like Daylesford it’s easy to imagine establishments like these falling prey to the flawed logic of catering to the seasonal day-trippers and ignoring their core clientele. When in fact it is the places that provide for their regular customers so expertly that generates the original demand from outside. Papa Serge indicated that Simon, the landlord, might not be in charge for much longer, so my advice is to get there while you can. 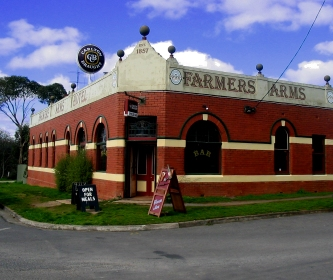 For those with better weather or more time than we had, Daylesford offers plenty more. The historic bath-houses, the lavender farm and the home of the Australian cricket-bat willow are just a selection of what’s on offer; not including a homeward detour to nearby Hanging Rock. In a competitive market, Daylesford is blessed with an alchemic talent to be both a real local town with intrinsic charm but also comfortable providing the trappings to lighten the loads and the purses of any fortunate visitors.

I love Daylesford – The township and surrounds are so tranquil and a great greataway, but at the same time they provide the style of country hospitality expected of a weekend retreat destination. I’m headed to Daylesford in about 3 weeks, August 14-17, so I will be sure to take in some of these sights!

When it comes to contemporary authors, not many can write a powerful plot driven novel and succeed. Yet, Australian...
© Onya Magazine 2009 - 2020
Back to top