Welcome to Seattle, the birthplace of grunge! For the uninitiated, grunge is a style of rock music characterised by a raucous guitar sound and draggy lyrics which arose during the mid 1980s in the Pacific Northwest of the United States. Best typified by the ‘gods’ of grunge Nirvana, the headbanging musical style has its roots in punk rock, alternative rock, heavy metal, and other related genres.

Beyond creating its own musical genre that became popular in the early 1990s, Seattle is also home to great musical acts. They include grunge icons from the 90s and 00s like Nirvana, Sonic Youth, Pearl Jam and Soundgarden, as well as the legendary Jimi Hendrix.

For alternative music fans, Seattle is a sonic paradise—from recording studios and memorials to museums, you can retrace the footsteps of music icons and bop to great live music. Who knows? You might just meet up-and-coming rock stars!

If you love music with that underground edge, let the team at Pan Pacific Seattle bring you on an acoustic journey into the “Seattle Sound.”

Curious to peek inside the recording studio where Seattle’s pop-rock scene purportedly started? Make a trip to the London Bridge Studio, where bands such as Alice in Chains, Pearl Jam, 3 Doors Down and OneRepublic have recorded their songs.

One of the major recording studios in Seattle that actively promoted the grunge movement, London Bridge Studio continues to be a creative space for all artists today. It offers an hour-long tour of the studio daily, where visitors can see (and hear, of course) what goes on in a recording studio. You can also walk the hallways where musical greats like Eddie Vedder (from Pearl Jam) and the late Chris Cornell (Soundgarden) once strolled.

Listen to the “Seattle Sound” at Record Stores

Easy Street Records is the indie rock store of choice, with knowledgeable staff who could get what you want quickly and an encyclopedic collection of all things alt-rock. It boasts of a coffee bar next door that doubles up as an event space for in-store performances.

If you are more into mainstream rock, head over to Sonic Boom Records, a rock counterpart to Easy Street, which offers even cassettes!

While you are in the area, do also visit Bop Street Records. Located opposite Sonic Boom, it was accorded one of Wall Street Journal’s 2011 top five best music stores in America. With half a million records stocked from floor to ceiling, plus big vintage jazz and rock selections, the store is a treasure trove for retro-music lovers.

At these stores, you can hold a vinyl in your hands or wander through aisles of music genres spanning from Rock, Soul/R&B, Jazz, Blues, Classical, Country, World and more. With music consumption going digital these days, these record stores are a welcome reminder of how we appreciate music in a bygone era.

Pay Homage to Seattle’s Music Legends at these Memorials

Make your pilgrimage to your favourite music icons here in Seattle.

Begin with the Kurt Cobain Memorial Park, or Kurt Cobain Landing. Dedicated to the late frontman of the popular grunge band Nirvana who tragically shot himself, the memorial sits next to the Aberdeen bridge in his hometown of Aberdeen. Fans can pay their respects to the late grunge star while gazing at exhibits featuring highlights of his musical career. They include a statue of a guitar, a plaque of Cobain, and a board with the lyrics of the Nirvana song he wrote: Something in the Way. Inspired by the Aberdeen bridge next to the memorial, the lyrics of the song is a small but fitting tribute to a talented musician gone too soon.

One of the top things to do in Seattle is to take a wefie with the Jimi Hendrix statue. A celebrated musician of the 20th century, Hendrix was described by The Rock and Roll Hall of Fame as “arguably the greatest instrumentalist in the history of rock music.”

The statue sits on Capitol Hill near Downtown Seattle and immortalises the rock star in bronze, capturing him in one of his signature poses. It is one of the most popular Seattle photo spots for music fans.

A more sombre memorial is found near Hendrix’s grave at the Greenwood Cemetery in Renton, Washington. An etched portrait of Hendrix alongside some of his lyrics lay inside a stone dome, surrounded by his tomb and those of the Hendrix family, including his mother.

Swing to the beat of Seattle’s Live Music Scene

Ready to rock out to live music in the Emerald City? Most aspiring musicians here cut their teeth at local bars and cafes before hitting the big time. Two venues where fledgeling grunge bands used to get their start are worth checking out here.

Sing like no one is listening at The Crocodile, long known for being the IT place for budding musicians to showcase their music. Back in the 90s, up and comers such as Pearl Jam, Nirvana and SoundGarden began by taking to the mics here. Still vibrant and exciting today, visitors flock to the Crocodile to listen to new bands that might become the next big hit.

Or party like a rock star at Re-bar, where Nirvana released their debut album, Nevermind. Featuring live music with a gallery showcasing Seattle’s local artwork, the bar is a great place to hang out and soak in a sliver of Seattle’s music and art scene.

Ever been to a music festival? If not, attending your first in Seattle is a good start—eclectic and electric, the city’s famed music festivals are spread throughout the year.

Begin with the famous Ballad Jazz Festival in May. First started in 2003, the event features Seattle’s world-class jazz musicians. If you are visiting Seattle in June, however, you should make a date with the community music festival Honk Fest West—an extended street extravaganza showcasing musical acts of any genre from all over the country. To feast your eyes, ears and stomachs on Seattle’s best, join the Capitol Hill Block Party in July, which features excellent bands art shows, local food and more.

If there is one Seattle music festival you have to attend, it is the Bumbershoot Music Festival, which runs over three days from late August to early September. Named one of the top five festivals in the U.S., the annual international music and arts festival showcases Seattle’s best entertainers alongside major artists. Beyond music, participants can indulge in art, comedy, and food, glorious food.

Need to unwind after all that adrenaline from the music? Return to Pan Pacific Seattle and head to The Lobby Bar to wind down with one of the bar’s refreshing speciality cocktails, or handcrafted Seattle ales.

[…] other music related displays. As you witness live shows and check out the museum, fit in time to check out other noteworthy areas such as the London Bridge Studio where numerous popular artists recorded their albums. You can […] 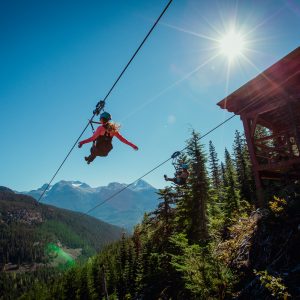 Whistler Village in summer When you think of Whistler, you probably think of the epic ski season that attracts snow worshippers...
© Onya Magazine 2009 - 2020
Back to top