‘Tis The Season To Be…Feral 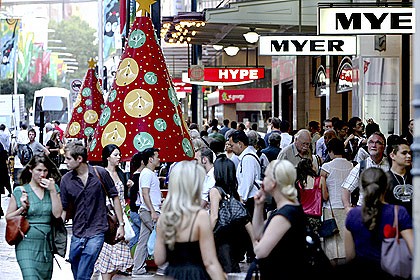 The tree has gone up, decorations abound and the Christmas Carols playing in department stores across Australia are ringing in our ears to remind us that Christmas is approaching like a looming deadline. And for many of us, it is also a reminder that, despite our best intentions, we have once again left Christmas Shopping until the last minute.

You’ve manoeuvred the car-park like a military strategist, you have pushed and shoved your way through the masses and you’ve finally entered the store. You have a five page shopping list and you are greeted by a sales assistant who is eight hours in to a thirteen hour day of a thirteen day week. The tension is palpable.

The nightmares from last year are still fresh in our minds, persuading us to call the whole thing off. But try telling that to the economy (and the kids). Instead, follow these rules for Christmas Shopping and you may just avoid the hostility of last-minute shopping. Like the miracle of Chanukah, this is the gift that keeps on giving:

· No-one wants to hear Jingle Bells with a chorus of ‘wailing infant.’ If the child has reached head banging, fist pounding status in the middle of a crowded store, it is time to concede defeat and call it a day. Perhaps now would be a great time to discover the joys of online shopping.

· If an item is ‘sold out’, it is sold out. No amount of winking, whining, bargaining or pleading will conjure it up in thin air.

· Logic and manners may often take a vacation during the hysteria of last minute shopping, so just remember, if another customer has landed claim on the very last copy of Twilight: Limited Edition it is not worth starting a public brawl.

· Huffing and puffing may have blown the house in, but it certainly won’t make the line move faster. Instead of getting mad, engage in a little voyeurism and observe others whipping themselves into a Christmas Frenzy. It can often provide a truly fascinating study in human behaviour.

· Do not start a pursuit for ‘item unknown until seen’ five minutes before store closing time, especially if it requires rummaging through a table of perfectly folded t-shirts with a sales assistant hovering nearby. You may just end up with a bag of coal.

· Fixed pricing exists for a reason. Unless you are shopping at the Camberwell Markets, asking for a “better deal” will almost certainly guarantee that you will get anything but.

· The old rule still applies – treat others as you want to be treated. Do not be rude to sales assistants, do not throw money at them, do not talk on the phone while they are serving you and do not snap at them. Remember that they operate the magic button labelled ‘discount’.

· If there is a long line behind you at the register, by all means fumble around inside your bag for the hundreds of five cent coins. Make a little joke even. But be prepared for the coat-hanger wielding mob standing right behind you.

· Changing rooms are not bathrooms, your bedroom floor, sanitary disposal units or rubbish bins and should not be used as such.

· If you don’t already have one, adopt a sense of humour. Things go wrong, machines break, people make mistakes. Take a cue from the jolly red man himself and laugh it off.

Haha, this is brilliant!