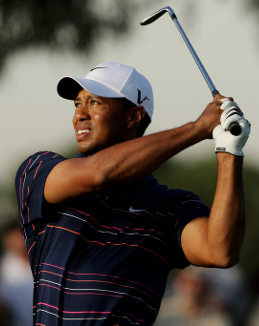 I’m a casual golf fan at best but I know enough to have a favourite player, even if that player is, debatably, a pretty obvious choice. You definitely don’t have to know much about golf to know Tiger Woods; all it takes is a quick flick through Women’s Day at the supermarket. My opinion of Tiger has sunk over the last year, as it has for almost everyone, but it didn’t stop me wanting to catch a glimpse of him at the recent JBWere Masters. Tiger’s posters may have been taken off bedroom walls by concerned mothers worldwide, but I still headed out to the course excited to see him.

Tiger was my first priority when I hit the mushy course on an overcast Melbourne Sunday. The course layout was foreign to me, and maps didn’t seem as accessible as I would have hoped, but despite it all I spotted him almost immediately. Nobody else draws a crowd like Tiger and from the fairway to the green there were people packed amongst a flimsy rope, eagerly peering at a red dot making his way up the fairway. I nestled myself in besides a short blonde woman with puffed up lips and Tiger written on her shoes and waited with anticipation for the sportsman fallen from grace.

I’m not sure exactly what I expected to see. I guess in a way I was looking for signs of a troubled man underneath the immaculately dressed golfer. I watched for cold interactions between him and his partner, Robert Allenby, and half wondered if he’d wink at the blonde beside me. Rumours have been rife of a disagreement between Tiger and his long-time caddy, Steve Williams, and I looked for an unease between them. Whatever else I was expecting, I didn’t see any of it. Tiger and Williams seemed like the good buddies they’ve always claimed to be, and Allenby also seemed to have a good connection with him and chatted far more than other players we’d see later that day. There was some evidence of his recent struggles however, but it wasn’t in his demeanour.

Tiger’s golf was the giveaway. His golf has slipped famously this past year, the result of knee-surgery and a divorce. The first shot I saw Tiger hit landed in the crowd. There were gasps as we recalled the prior day’s ambulance incident, but thankfully the only harm was to Tiger’s scorecard. He followed up that mishap with what was perhaps an even more shocking putt, pushing his score up to even.I watched him tee-off on the next hole but left him alone after that. There were plenty of players, far more accessible, that I had come to see.

Camilo Villegas was another big name Melbourne boasted, and thanks to my Blackberry, he was easy to find. He’s the Colombian whose blonde flowing locks and fitted white trousers have the ability to attract even the most golf-phobic women to the sport for a moment. I watched him for a few holes, but his golf game wasn’t measuring up to his looks and I left to explore the grounds.

I saw many more well-known names, plenty of mis-hits, and some unbelievable shots, but it was only a matter of time before I found myself back watching Tiger. I had settled in on the 17th green, a calm and peaceful spot, despite the barking dog who was ignoring the signs demanding silence. I was sprawled out watching players unknown to me until the tell-tale crowd made their way up to occupy the formerly serene spot and I felt obliged to stand to attention. Tiger was back but this time things were different. He scorecard boasted -4 and his persona wasn’t the calm and talkative man witnessed just hours before. This Tiger was focussed and in-form. I finally saw some delightful golf in which he shaved his score down one more to -5. The birdy came with rapturous applause and some particularly enthusiastic fans. As he walked away, Tiger threw them the ball he’d just sunk and flashed a movie star grin. That was the last image I had of Tiger, but it sure was a good one. As I left the course I could hear the cheers as Tiger finished the 18th at -7. Melbourne, it seems, still loves Woods, and with promises of a 2011 return, it seems the love is mutual.