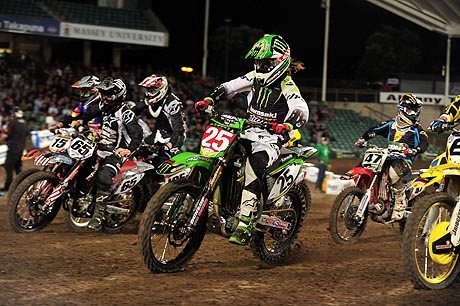 Supercross is a sport that combines fitness, strength, and danger; clearly a winning recipe when it comes to motorsport. However, it doesn’t have a huge following in Australia, despite Chad Reed’s introduction and promotion of it. Most of its die-hard, tattooed fans reside in the United States, where the sport has reached dizzying success. I headed over to Sydney for the Monster Energy Super X championship to try and work out why.

There’s no doubt supercross has the potential to attract many new fans. It works well as a spectator sport; fans can get extremely close to the action and it’s compact enough that there’s no need to move from your seat. It can also be quite thrilling, with a combination of tight corners and frequent crashes coaxing gasps from the crowd. Yet if there’s one thing that makes a sporting event frustrating, it’s not knowing what’s going on and unfortunately this is where the Sydney show fell down. Being new to supercross, I sat pre-event trying to get my head around what was to come. I enthusiastically questioned my boyfriend and devoured the program’s beginners guide. I was feeling pretty confident before the event started, in fact, I even knew who I wanted to support. Unfortunately, the racing soon descended into what looked like chaos to the beginner’s eye. I had no idea who was racing and which race it was, due to the lack of a schedule in the program and a big screen I could barely read. The audio system was far too faint to hear any announcements and a lack of a proper program meant all the races seemed the same.

A lack of information continued to be the biggest problem as the night wore on. During races, I found it impossible to tell who was winning unless I had devoted my full attention to the leaders for the entire race. There was a leaderboard, but I was literally squinting to read it and still could only make out the odd name. Apart from Matt Moss and Josh Hansen, who were winning enough for it to eventually get through on the loudspeaker, I had no idea who was winning the rest of the races. Sure, someone with more supercross knowledge probably did, but supercross is trying to get bigger in Australia and that means marketing it towards ignorant audience members like myself. Marketing should be focusing on educating potential fans, and a big part of that is getting to know the really good riders and the rivalries between them. It would have been so easily achieved with a decent leaderboard, a microphone that enabled you to hear the rider interviews, and a program more dedicated to the event and less focused on feature articles. By neglecting that, supercross was neglecting the people they really wanted to attract; new fans.

Excitment is the one thing supercross brings in bundles, and my boyfriend and I did enjoy the event, but bad organisation is taking away from the sport in Australia. It’s a shame because with just a few adjustments the event would have been a highlight of the year. Thankfully, Supercross is still in its growing phase. The event has only been going for two years and there is plenty of time of improve. The Monster Energy Super X Championships are attracting top riders and already have a solid fan base. It shouldn’t take much to turn this event from decent into superb.

‘What On Earth Are You Wearing?’

‘What On Earth Are You Wearing?’

I remember signing up for the Michi Girl newsletter. Entering a little competition she had running for the L’Oreal Melbourne...
© Onya Magazine 2009 - 2021
Back to top