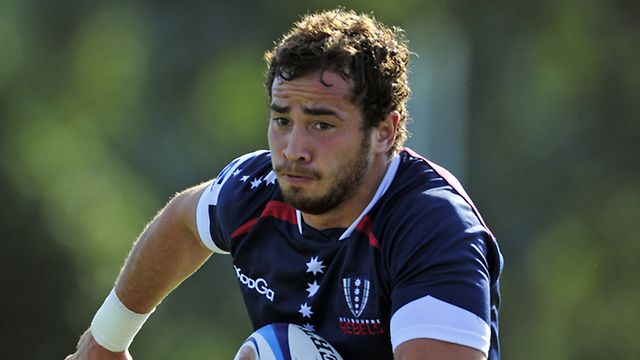 Sometimes one win is all it takes. AAMI Stadium was alive with the sound of rugby last Friday night as the Melbourne Rebels clawed their way to a narrow victory over the ACT Brumbies. It wasn’t pretty rugby – at times it was downright ugly – but it was without a doubt a passionate and determined performance.

Just one week ago the Rebels were embarrassed by the NSW Waratahs 43-0 in their first ever match. Their defense resembled Swiss Cheese; the hyped Danny Cipriani choked away an easy kick, and their scrum fell flat, literally. Within a week the Rebels have managed to improve their defense tenfold, and whilst their scrum is still the weakest part of their game, Cipriani lived up to the hype and kicked seven of eight penalties. Far from looking tight, there were no signs of previous nerves as he steeled himself to convert the final penalty from 38 metres out to win the game for the Rebels. The Brumbies, meanwhile, were impatient with the ball whilst the Rebels showed heart in defending time and time again. The Rebels certainly didn’t look like the better team – the Brumbies had the majority of the possession and territory – but in rugby all that matters is the final score, and that was 25-24 in favour of the Rebels.

The real winner, of course, is Australian rugby. As it turns out, The Melbourne Rebels aren’t a bad squad and have a pretty exciting fan base for such a young team. The nail-biting second round match far exceeded expectations and had the 15,000-strong crowd on their feet. The atmosphere was far more electric than that of the Bledisloe Cup held in Melbourne last year where the crowd was mostly made up of loud All Blacks supporters. The Rebels fans chanted like soccer crowds, (was that an adjusted Melbourne Heart chant I heard?), barely took their eyes off the action, and lost their voices yelling after the full-time whistle. Fans loitered after the game; one type of Rebels scarf sold out and chants of ‘Go Rebels’ could be heard all the way to the train station

Sometimes one win is all it takes bring a State behind its team; the Melbourne Rebels may have scored that win.

The Melbourne Rebels take on the Sharks in round four of the Super 15: Friday March the 11th at 7:40pm at AAMI Park, Melbourne. Tickets start at $25.

the thing that annoyed me was checking the websites for the papers the following day and seeing no mention of the game at all on the Age and only a tiny link at the bottom of the Herald Sun home page. What does rugby have to do to get noticed in Melbourne!