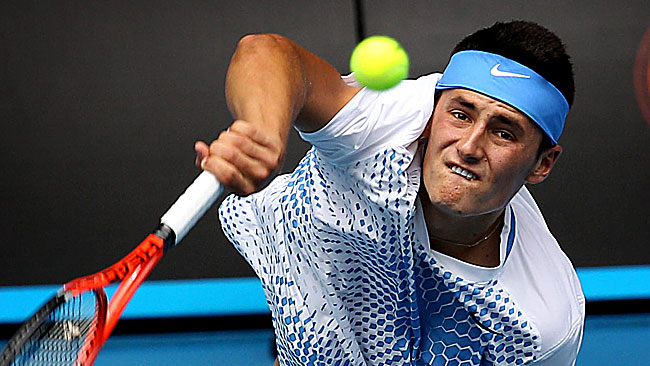 When Bernard Tomic steps onto a tennis court, he looks awkward. Far from the intimidating hop-skip of the energetic Rafael Nadal, or the dangerous grace of Roger Federer, Bernard Tomic shows no signs of doing damage. His 18 year old body looks unaccustomed to its 6’4 frame, his legs are yet to fill out; they look too skinny, too wiry to make an impact on a tennis court. His face betrays no signs of rugged facial hair, a sure sign he lacks the maturity to cause any major upset. When Tomic picks up a racket and starts to swing, he seems uncomfortable. He jabs at the ball, slices through it, hits a defensive shot just when you think he’ll attack. He lumbers around the court, seemingly putting in barely any effort. In these days of powerful players – where movement is one of the most coveted attributes in tennis – Tomic simply doesn’t fit in. His junk-balling and questionable agility should make for a dire combination. Yet despite this, Tomic is making leaps and bounds in the tennis world.

With his game and on-court presence, it’s easy to manufacture a personality for the young Australian. He surely belongs in the group of tennis outcasts; humble, shy, and as surprised as the rest of the world when he made the quarter-finals of this year’s Wimbledon. Tomic should be, in theroy, a down-to-earth Aussie bloke. However, off-court, Tomic is remarkably self-assured, and his confident voice often spills quips that have upset fans and fellow players alike. There are a number controversies that have dogged his young career, such as the rumour that he turned down a practise session with Lleyton Hewitt at the 2009 Wimbledon tournament for no other reason than that Hewitt wasn’t good enough. Tomic was also suspended in 2009 for walking off court during a 2008 match against fellow Australian Marinko Matosevic. In January 2010, Tomic complained that he had to play the night match on Rod Laver as it was too late for someone of his age. This resulted in an argument with the tournament director where Tomic’s father threatened to quit Australia and have Bernard play for Croatia. In January of this year, Tomic pulled out of the Australian Open wildcard tournament claiming he was sick. Journalists uncovered him practising in Queensland days later, casting doubt on his sick excuse. Much to the anger of fans and players, Tomic was awarded a wildcard regardless. 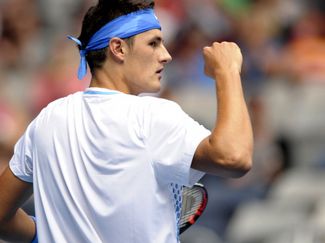 Due to the above controversies and interviews that deliver a slight hint of self-entitlement, Tomic is openly disliked by many tennis fans. However, it is hard to argue that his attitude coupled with a decent work ethic, (something he admits he is working to develop), could be what he needs to take him to the top. Successful Australian sportsmen have a history of talking their way to the top, of battling until the bitter end, and fearing no one. The likes of Shane Warne, Lleyton Hewitt, and the entire late ’90s to early ’00s Wallabies team were shadowed by controversy and dished out their fair share of trash-talking, but they also achieved some of Australia’s greatest sporting successes. It seems arrogance aids Australian sportsmen to great effect.

Theodore Roosevelt once said that, “It is not the critic who counts,” and indeed it is Tomic’s results that will matter most to the Australian record books. As he packs his bags and moves to the bright lights of tax-free haven Monte Carlo, perhaps Australian tennis fans need to accept Tomic for who he is. He may be unconventional at times, but he is Australia’s great tennis hope. As long as he plays under the Australian National Flag, it’s best to put his flaws down to youth and support him.

Anyway, tennis is packed to the brink with nice guys and bromances. It could do with a villian…

Bernard Tomic: The Great Aussie Hope « Any Given Surface

While I’ll admit I laughed about the “too late to play in Laver Arena” story at the time, I also knew that he would mature. He’s got a great game, composure, and I like the way he thinks on court.

Here in the US, where there’s much gnashing of teeth over the state of American tennis, there is similar attention on Ryan Harrison at the moment. Harrison seems to love playing the “villain”, though in an all-too-conventional way. If these guys both mature, it could be a terrific future rivalry.

With recent studies proving that stores are marking up products by an alarming percentage, it isn’t hard to see why retailers...
© Onya Magazine 2009 - 2020
Back to top