So, the fabled last Saturday in September has morphed into the first Saturday in October, with a draw being played out in the AFL Grand Final. The football world was praying for a tough, close match and Collingwood and St. Kilda duly obliged. They produced one of the most hard-fought, brilliant finals, and just the third draw in VFL/AFL premiership history.

Under the league’s historic rule, drawn grand finals must be replayed in full on the following Saturday.

Players, coaches and fans were both shocked and visibly distraught with the result. Players from both sides fell to the ground in exhaustion when the final siren sounded and the realisation that their dream had not been achieved set in. Frustrations boiled over with Magpies Captain Nick Maxwell labelling the rule as an “absolute joke” in his post match interview.

This unusual situation has thrown Victorian sport into a spin, with other major events scheduled for Saturday the 2nd of October being postponed. Various people in the football world have had to adjust travel plans to accommodate for “round two”, but this is the beauty of our game – it is a part of what makes it different from the rest of them. 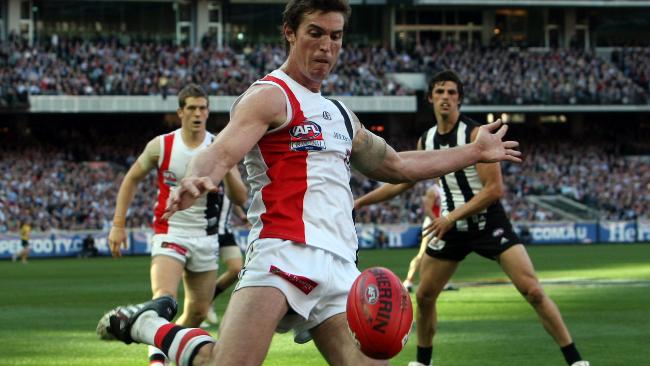 The match was a see-sawing epic that had people literally on the edge of their seats. St. Kilda’s Lenny Hayes was awarded the Norm Smith Medal as best on ground, leading the game in disposals, with 32, while his 12 tackles was also a game high. These stats highlight his amazing work rate around the ground. The Pies enjoyed a perfect start to the game, kicking the first goal within 30 seconds and eventually taking a four goal lead into halftime.

The Saints showed characteristic resilience after being under attack, and slowly chipped away at the lead until it was within striking distance. Brendon Goddard was the other outstanding performer on football’s biggest day, the Saints utility seemingly everywhere, before pulling in one of the greatest marks in grand final history.

Who will come out on top in the replay is a mystery. Player management, both mental and physical, will play a bigger role than ever. Both sides will need to be prepared to attack another gruelling game head on, without losing their killer instinct.

As we look forward to Saturday, one thing is for sure; 2010 will never be forgotten, and these players will be a part of history forever. So strap yourself in (again!) and enjoy football at it’s purest, we can only hope that we will be on the edge of our seats once more.

Stephanie Crawford chats to Nick Papadakis from Melbourne band One Kind on the eve of the releasing their first full-length...
© Onya Magazine 2009 - 2021
Back to top