These headlines can only mean one thing.

Footy fever has reached its climax and I am running for cover.

AFL has become a certifiable part of Australian cultural identity. Right up there with Koalas, Vegemite and Dame Edna, we find ourselves identified by the spectacle of watching 44 sweating men chasing after an oddly shaped ball for two hours. So, how did a culture of obscenity-screaming, meat-pie eating fanaticism come to infiltrate our national psyche and lead us into an era where ultimate religious devotion means dedicating six months of the year to a violent game of pass and catch? 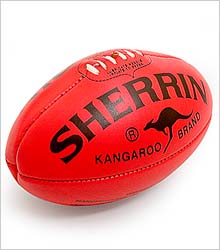 Collectively fuelling the egos of hundreds of men and destroying the dreams of millions more, football has had something of an unrivaled impact on how we perceive our national icons. What is it about footy that can make a grown man cry whilst simultaneously applauding the tasteless and obscene antics of our footy players? Football started as a game which upheld the values of sportsmanship, celebrated athletes at their peak and supported team victories, but it seems it is now the aggression, the blood, and the drama that have become the major attractions of AFL. The expectations of the game have evolved so much that the shifted focus is now dominated by the negative publicity that surrounds the players and the foul mouth of Sam Newman.

Has the hypnotism of watching a ball flung up and down the pitch skewed perception on such a grand scale, that we are unable to see past the physical victory of a ladder-ranking, into a time where we are celebrating public debauchery and making national heroes out of the violent escapades of footballers? Our revered players en masse read as a who’s-who of the most atrocious members of societal conduct, and yet, this questionable behavior has become nothing more than incidental misdemeanors that are conveniently overlooked.

These are the same “national heroes” who have only just retreated from their previous headline grabbing exploits. Their stories recount issues that otherwise ordinary folk would take years to recover public sympathy from: on-field violence, off-field violence, drug abuse, drink driving and fashion abuse on the Brownlow red carpet. It seems we Australians are a forgiving bunch. We will vilify our “national icons” in the media, until they score a winning goal, and suddenly all is forgiven.

I became accustomed to the hypocrisy of football early on. In a household where screaming and swearing was chastised, there was the weekend ritual as my family religiously watched their beloved Demons routinely crucified – with the accompanying swearing, screaming and door slamming.

There is certainly something to be said for a game that allows its loyal followers to torture themselves in such a forgiving fashion. Neale Daniher, a previous coach of the perennial ‘cellar dwellers’ the Demons, once commented that, “sometimes footy sucks” and it certainly does. But, perhaps it is not just the game that can be attributed to this negative hype. The media obsession with painting our AFL players as “bad boys” has fed into our inquisitive minds, offering up stories that continue to infiltrate our news and replace issues of perhaps greater importance. The off-field indiscretion has become so routine in our news that it no longer shocks us.

Short of having crystal-ball vision, or perhaps even a vague interest in the game, I can not predict the winners of this weekend’s Grand Final. But I can predict the outcomes of the weekend insanity; sore losers, broken glass, public humiliation, a bloody brawl or ten, and raging headlines devoted to our “national heroes”.

So, what is the verdict? Is AFL a hyped up game of catch and throw that makes heroes out of the undeserving, or am I just a really bad sport?

By Jonathan Howcroft Last night on The Footy Show Sam Newman called someone a monkey. More than once. He offered further...
© Onya Magazine 2009 - 2020
Back to top