There were two types of kids at my primary school – well three, if you count the Eames family, who bread like rabbits – those who loved the annual athletics carnival and those two loathed it.  With an unwieldy and slow moving gait reminiscent – according to my mother – of a penguin, it is not surprising I fell very much into the latter category.

One of the problems with the athletics carnival, aside from it being compulsory, was that it required participating in timed trials prior to the big day.  These aimed to produce nominally competitive races, making sure the quick raced the quick, the medium paced raced the medium paced and I raced bookish types, injured kids on crutches or limping or challenged (i.e. overweight) and Laura Brihley, who was both.

More immediately, however, time trials afforded the quick the opportunity to lord their athletic prowess over the rest of us, bandying about things like: ‘Wow, that means I could do six laps in the same time it took you to do one’ and: ‘I had a faster personal best as a four year old!’  Alas, pointing out my superior spelling skills and the fact I’d mastered the 13 times tables at four years of age made for a fairly hollow retort. I did make a name of sorts for myself one year, however this was as the little sister of my deranged brother who managed to get disqualified from tunnel ball.  Disqualified, meaning banned for life, that is; children cried apparently as he kicked their balls away.

The experience would have been thoroughly demoralising, were it not for the one thing that made it all worthwhile:  the participation ribbon.  Of these, I had tens.  I had one for every year I’d participated.  In fact, I could probably have received an award for being the ‘best’ participator, were these part of an official tally (as, I would argue, they ought to be). 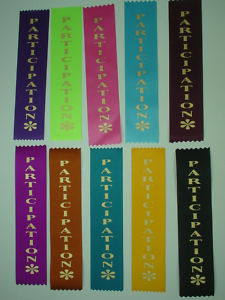 It altogether escaped me that this green, purple, sometimes orange ribbon, emblazoned with the words ‘PARTICIPATION’ was anything less than glorious.  After all, I had quite a collection.  I would bring them out for underwhelmed guests to stroke on occasion, while I regaled tales of the races I’d not nearly won.  You will appreciate the year in which they stopped the participation ribbons was thoroughly disheartening.  Granted, it was the beginning of high school but it was disappointing nonetheless.

Thankfully, now I have a job and periodically complete training courses that issue certificates.  In the absence of a Castle-style pool room, I have converted my cubicle into a small shrine of accomplishment:

Impressed?  Well, wait ‘til you see my ribbon collection.

I’ve always been opposed to participation ribbons, mainly because of the word “Participation” itself. I’d far rather they said “Achievement” or something similar, as it would acknowledge that you actually did something, rather than were just involved in it.

It wouldn’t matter if you’d finished last in the 100m, what would matter was that you had achieved a 100m sprint. “Participation” has always felt like a a way of dodging the notion of encouraging kids to try to be their best, instead encouraging them just to try. Which somewhat strikes me as saying “It’s ok to be half-arsed about something things”.

Then again, I am a ruthlessly competitive person. This could have a lot to do with my wanting to celebrate outcomes rather than inputs.

I take your point Gwynn; I love debating words. Once I used the word ‘semantics’ and it was so perfect I sometimes re-live that occasion.

Total tangent – for the Bicentenary in 1988 the tagline was ‘Celebration of a Nation’ – the Labour party came up with that. Under (previous) the Liberal government they’d been calling it ‘The Australian Achievement’; that was considered more contentious or less sensitive at the time in light of the Indigenous opposition. That has nothing to do with anything, but I think is interesting.

And I’m also pretty competitive; I only really like things I’m good(/amazing) at.

the answer to everything « my mini manifesto

[…] Brillo!  I mean, so far I’ve been labouring under the impression I never win anything (participation ribbons notwithstanding) but in fact I never enter anything.  Is it semantics?  Or are the two […] 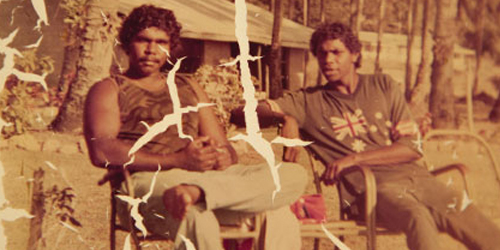 The Tall Man M15+, 80mins Directed by Tony Krawitz It can be hard for a documentary to be interesting on both an intellectual...
© Onya Magazine 2009 - 2020
Back to top