Letter From The Chief: Guess Who’s Back?

You may have noticed it’s been pretty quiet at Onya HQ for the past six (or so) weeks.

No, we didn’t stop finding things to write about.

No, we weren’t failing and giving up (we never will).

No, we weren’t being lazy.

We had a little break. That extended into a slightly larger break.

I got married. As some of you already know. Don’t believe me? Here’s a picture: 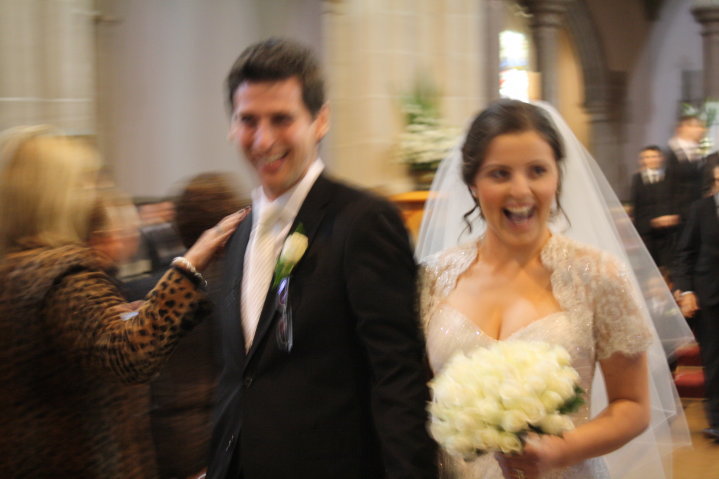 In the two weeks leading up to the wedding I took some time out to focus, prepare, organise and enjoy. Then I had a month off.

An entire month off. From everything.

I’ve never had such a luxury in my life. I’ve never had that many days off in a row. I’ve gone to school and to work and to uni and this, that and the other and always juggled it all.

But not this time.

I lived in a bubble. And I loved it. It was the best, most relaxing, most important thing I have done in quite some time. My husband and I had the most amazing wedding day – relaxed, beautiful and full of love.

Whilst I can’t say that I completely kicked back and did nothing (I mainly settled into my new home – which involved lots of unpacking and sorting and organising – and I still co-ran a youth program I’m involved in) I can say that I unplugged. Switched off. Refreshed. And recharged.

And, as a result, so did Onya.

I was questioned a few times over the course of my break as to how I could possibly take such an extended period of time out of my business, out of my magazine, and not expect it to be affected.

Here’s the thing; I never assumed that it wouldn’t be affected.

So am I slightly irresponsible for just pulling the plug for six weeks? Am I a little off tap?

Most people that work in online media are almost somewhat obsessive about constantly churning out articles on any old topic just to boost web hits. Onya has never been about that. We’ve always been about quality over quantity. Real over tabloid. Intelligent over airy. And, as a result, we’ve had a pretty good run – turns out there are a lot of people out there that are about that too.

But the most important factor in my decision to slow down was very simple; I wanted a break. I wanted to live in that post-wedding bubble for a month. I’m never going to have that time again. And I’ll be damned if I didn’t give myself the time I deserved to enjoy it.

I strongly believe that family is more important than success. Success to me has very little to do with web hits, and far more to do with my husband and family. And anyone who chooses to hold that against me is probably a reader I care not to have.

More than anything, on this day, June the 1st, 2010, exactly a year since Onya Magazine launched, Onya is still and will always be about Australia.  And if there is anything Australia does well it’s family. Mateship. Switching off, when the occasion calls for it. I’m thankful to live in a country that allowed me to do that for a month. And I’m thankful for the readers that, on our first day back today, have been so excited and thrilled of our return, they’ve caused a collective ‘WOO’ across the country.

What has surprised me most, with only a day and six new articles behind us, is how people have come back. Willingly. Excitedly. How they have missed us. What they want to see next.

And it re-affirms to me what I’ve always wanted us to be; a quality publication that doesn’t discriminate, take it self too seriously, think it’s better than another or be so full of ego, academia or the desire to be cool, it’s actually completely out of touch.

Onya Magazine has a very big six months ahead. We’re growing, expanding and building, every day*.

*Unless we decide to take the occasional one off, which I’m sure you’ll allow. You know we’ll be back. We’re never going anywhere.

Sandi Sieger aka The Chief

Letter From The Chief

Beauty for the Australian Green Goddess

Happy Birthday to all the ONYA-ites!

Bet you are refreshed and more focussed than ever Sandi – peace can be more invaluable for your work than continuously plugging away. Plus holidays are practically an Australian institution. Just consider it one big “sickie” 😉

PS Happy to now get back into sharing the luxury side of Australian life…and a bit of good Aussie tucker here an there.

Hoorah! You were missed but I completely understand the time away. Welcome back and Hap hap happiest of Birthdays to Onya. I feel privileged to know you and witness such a great work. Cheers to you all 🙂

Sandi, you deserved the time off. Well done on taking the time to do what you want to do. I’m often accused of not taking enough time for myself, and I only wish that I can take 6 weeks off around my own wedding, but alas, I work for “the man”.

Still, I made a decision to have a honeymoon, which wasn’t going to happen at all up to a fortnight ago. My fiance and I made the decision to ditch everyone – family, friends, work and other commitments for a week and we are jetting off to Vanuatu to hang by a lagoon and chill out. After all the pressure from my family to do what they wanted us to do for our honeymoon, we went to see our our travel agent one afternoon and paid for our week away.

We all need to look after ourselves, and I applaud you for taking the time to relax, refresh, rejuvenate, and recharge. Wishing you all the very best with this fantastic publication, and happy birthday to Onya!

Beauty for the Australian Green Goddess

Have you been looking for a beauty directory that lists Australian made and owned ethical brands and products? Well search...
© Onya Magazine 2009 - 2020
Back to top