How To Survive Your Teenage Years 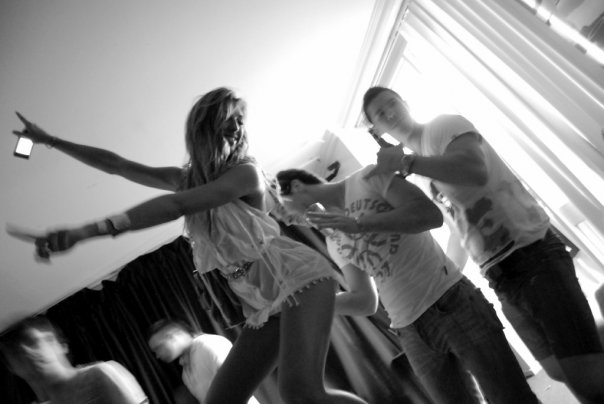 A shudder runs down my spine every time I think about my next birthday. For the first 19 years of my life I have looked forward to each and every birthday with an excitement that borders on unhealthy (I’m ashamed to admit that this has at times included wall charts and an annoying daily countdown on social networking sites). However, this year things are different. I’m turning 20. The big 2-0. I’m leaving my teen years behind me. Insert shudder here.

This makes me sad and slightly repulsed as I now have to face the fact that I’m not Peter Pan’s long lost sister after all and that I too, like everyone else in the non-fictional world, and am going to grow old. Despite this sadness, being a teenager was not easy. The fact that I am going to make it to my 20th birthday at all (fingers crossed) is an achievement within itself. I mean, I don’t think any average kid can live in a small Aussie town and live to tell the tale. Not without a bit of guidance anyway. So, I’m providing not 5, not 10, but 7 steps to surviving your teens in a small town in Australia.

Express caution when coming into contact with the Queen Bee of your school. We’ve all seen Mean Girls. It’s inevitable that you will encounter a Queen Bee-esque personality within your school.  There may even be more than one. They seem to run in swarms these days. You don’t want to get on the wrong side of the Queen Bee. Especially if you’re living in a small town, like me. Word spreads fast. But on the other hand, if she is as nasty and outright stupid as the one I had to endure for 6 long years, sometimes actions should be put into place. If you’re adamant that you want to undermine the practices of said evil, find a sneakier alternative than clawing her false eyelashes out with your fingernails. No, I’m not suggesting that you copy every move of Lindsay Lohan’s character in Mean Girls. But use your talents to ensure that you are not walked all over or bullied just because you’re different from the ‘it’ crowd. I chose to beat them in the classroom. And boy, did I! However, if you lack the confidence that I had, then another alternative is to simply close your eyes and think about where you will be in ten years. Then picture where these bullies will be. Feel better already?

Do not, under any circumstances, fall into the articulation patterns of the local ‘cool’ kids. Their continuing abuse of the English language deserves jail time. Feel free to make fun of their use of ‘dat’, ‘playa’, ‘tha’, ‘unda’, ‘da’ and phrases such as ‘i’m smarterer than you!’ (I wish I could say I never actually heard these words come out of someone’s mouth, but I would be lying), but never use these yourself. Unless of course you’re going through a gangster rap phase. That’s the one exception.

Avoid getting addicted to the Internet. Instead of letting social networking sites such as Facebook and MySpace become the masters of your life, you should become the master of them. When I use the term ‘master’, I am referring to learning how to have power over Facebook and MySpace. The opposite of being the master, is being the victim. Being a victim is when you are so addicted that you can’t even get your homework done or spend time with your family without it turned on. I, sadly, was once a victim. However, after two or three years of practice, I am now master of my domain. I’ve learnt to use Facebook to my advantage. To keep in contact with my home girls and boys and to simply share information. But of course, I also use them to lurk people. Never feel that you cannot lurk. I think it’s inherently built into our nature to be nosy. And if people want to post private things in a public space, that is their demise and your fortune.

Be a loyal friend. You never know when you may need them to ‘have your back’ as American rap artists would suggest (and no, I am not here encouraging any 2pac v. Biggie Smalls related violence in any way. Not at all. Never. But why not check this out? http://www.youtube.com/watch?v=__88v-dZCWw) But seriously, I’ve been best friends with the same girls since primary school and because we’ve always stayed loyal to each other, I know I’ve got friends for life who will put me first and that’s important. Treating your friends with respect is incredibly important during your teen years.

You shouldn’t always feel the need to push your opinions onto people. I know it may appear that I’m kind of doing that right now… but, like, you know, whatever (perhaps here I should add another step titled, “A Simpsons quote can get you out of any situation”.) Trust me, I’m speaking from experience.  It’s cool if you, like me, are the only person in your school who likes The White Stripes and that you think Miley Cyrus is effing ugly. But screaming it into the faces of people who you know don’t think the same is plain irritating. Sure, debating the matter if it arises is fine. Debate your heart out. But don’t go preaching.

Binge drink with caution. No, I’m not going to rattle off a list of statistics on injuries and mortalities caused from underage drinking. I’m attempting to save you from embarrassment. Something which should be handled as though it is just as serious as injury, and even mortality. You do not want to rock up to school on Monday and be the talking point of conversation because of your drunken antics on Saturday night (unless it’s related to your vulgar dance moves… that’s the only exception… hey, at least you were enjoying yourself). We all love to party and your teen years would be pretty bland without a few drunken anecdotes to tell, but don’t be ridiculous. I grew up in small town Bacchus Marsh in Victoria (the name Bacchus, ironically, deriving from Bacchus the God of Wine) and I’ve been to plenty of 16ths, 18ths and a few 21sts. Most of them have included moderately safe underage drinking at one of my friend’s houses with some dancing on furniture and arguments over who gets to play the music. Keep it at that and have fun. Don’t throw stuff or start fights. You’ll regret it when you go to school on Monday.

Being you and true to yourself is the most important thing. Even if you’re not 100% sure who you really are yet. As a teen, you’re growing up, both physically and mentally. Be aware of those changes and embrace them, no matter how scary.

While you can draw on the advice of friends and family, you can also find support via brands that embrace body positivity. Knixteen, for example (a brand that makes period panties designed for teens) has plenty of quality advice on their blog that addresses menstruation FAQs and other topics surrounding puberty.

During this “figuring it out” phase, you might find that you are made fun of by a few people that you don’t even like.

Excellent article and The White Stripes are excellent too!

Are you kidding me?!! This is the MOST cliche view of teenagers I have ever read! Nothing like my reality

If beauty is the sum of our parts, then surely it’s the little things like cuticles and well-groomed eyebrows that combine...
© Onya Magazine 2009 - 2020
Back to top