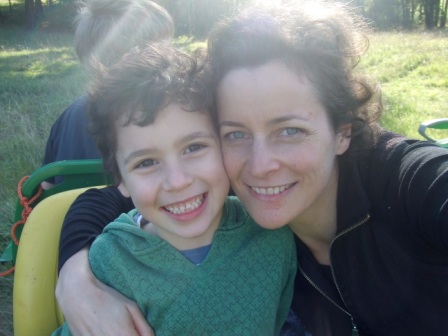 When Nichola Lefroy held her second son Tommy for the first time, two things ran through her mind – one was a very powerful sense of connection, and the second was a premonition that she would outlive him.

“It was very clear,” she says, her normally composed face giving way to the memory.

Nichola, 38, is a trained scientist used to solving problems with hard data and a pragmatic approach rather than a sixth sense. She pursued a career in public health and corporate project management before leaving the workforce to focus on her growing brood of boys – first-born Jack, Tommy and youngest Max – just as Tommy, then a bright, animated, connected toddler, started to struggle with some of his milestones.

Nichola and her husband Sam spent nearly 18 months working with specialists trying to understand and address Tommy’s speech delay and withdrawn behaviour before he was diagnosed with Asperger’s Syndrome, the mildest form of Autism, at the age of five.

By then, the diagnosis came as a strange sort of relief.

“I was shocked as well as being not surprised,” Nichola says. “At least we knew what we were dealing with.”

Autism now affects one in 160 Australian births, according to official statistics from the Australian Advisory Board on Autism Spectrum Disorders. When Tommy was diagnosed, his symptoms were considered mild; but in subsequent months, after battles with whooping cough and the flu, he regressed into a terrified, fragile little boy who couldn’t get out of bed, let alone leave the house – not even to go into his own backyard. His thinking became tunnelled, monochromatic, unable to cope with sensory experiences as fleeting as a breeze crossing his face. Nichola was convinced that the deterioration in his physical health was having a dramatic impact on his development.

“The doctors said it was because of the Asperger’s, but all we could think was, ‘No, our boy is in there somewhere, we’ve seen him, but now we’ve lost him, and we’re going to have to go in after him and bring him back.’

“That’s when I remembered the premonition, and that’s what I hang onto now – that we lost him, but just for a little while.”

These days, Nichola and Sam are part of a small but growing group of Australian parents using the home-based ‘Son-Rise’ relationship learning program from the Autism Treatment Center of America. The 30-year-old program was the first to suggest – and prove – that autistic boys and girls had the potential to overcome their challenges and develop meaningful relationships with people. Its philosophy has always been based on the concept – now accepted wholeheartedly by mainstream medicine – that the brain is plastic, and open to change and development.

Son-Rise teaches parents about the ‘continuum of interaction’ – from completely exclusive to completely interactive – and techniques to use at every stage that encourage their child to be more socially interactive and see the benefits of connecting with others, while also respecting their need to be in their own world whenever they want to be. For instance, parents are taught:

All of this takes place in a specially designed playroom in the home. Nichola says it can be “a big leap for people to take ownership of their child’s development,” but after months of consultations and research, “Son-Rise was the first approach that made sense to us, that was all about positivity and reward and acceptance, and that gave our boy real hope for the future.”

Nichola and Sam travelled to the U.S. in mid-2008 to be trained in the Son-Rise technique, and started the program on their return with the help of some dedicated volunteers. 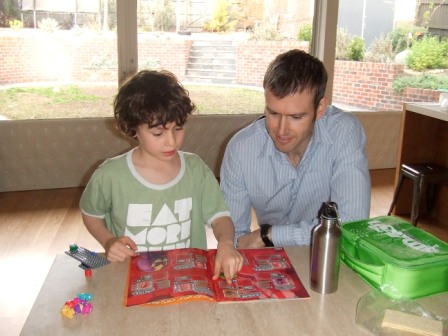 After a month in his special playroom, Tommy could face leaving the house to join Nichola on the afternoon school pick-up run. Another four months later on Christmas Eve 2008, he ventured into his backyard on his own volition to play cricket with his dad and brothers.

“I will never forget that moment,” says Nichola. “We were cheering and crying on the inside. It was a big milestone.”

After only a few months in such a nurturing environment, where so many of the stresses of everyday life had been removed, Tommy’s body was starting to heal, and he was regaining his love of connecting with the people in his life.

Tommy’s Son-Rise program was supplemented with some simple neuro-developmental techniques from the Seattle-based HANDLE Institute. HANDLE stands for Holistic Approach to Neuro-Development and Learning Efficiency; the institute aims to help people address neurological challenges gently but effectively with an individualised program of organised movement activities. For Tommy, this included exercises like sucking drinks through a crazy straw every day to train his eyes to track together, which helped make eye contact a much less uncomfortable experience.

Nichola also investigated Tommy’s physical health and, after a series of tests, he was diagnosed with Chronic Fatigue Syndrome and Leaky Gut Syndrome. His body was riddled with toxins, and his brain simply wasn’t getting the nutrition it needed. The link between his physical health and his development was clear.

On the advice of a holistic doctor (a GP who integrates traditional and complementary medicine to treat the body and brain as a whole, rather than just the pain or the disease), Nichola put Tommy on a specialised diet – cutting out gluten, casein, soy, sugar, preservatives, colourings and flavour enhancers – and a comprehensive nutritional supplementation plan to give him the best chance of restoring his strength.

Now, two years later, Tommy’s black-and-white world has shades of grey and even a colour or two – and Nichola says her son is coming back to her.

“He is a completely different boy,” she says, “and we are quite different as parents too.”

“We’ve got this opportunity to re-write our experience of their childhoods, and I am so grateful for that.”

Tommy is now interactive in the playroom most of the time, but it may be another couple of years before he’s ready to rejoin mainstream schooling.

“I’m trying not to get hung up on when that will be,” Nichola says.

“His reading and numbers are strong so I’m not concerned that he’s falling too far behind academically. I have moments when I think I would love him to be with his peer group, but he’s just not ready socially.

“Right now, the playroom is so much better for him.”

Eventually, she hopes to find a school for Tommy that has the right combination of pastoral care and academic rigour – and to turn some of her attention to the needs of the broader Autism community. She’d like to see Son-Rise training programs more broadly available in Australia, and to build on her scientific background with a Masters of Wellness so she can help other families take control of their health and wellbeing.

For now, Tommy’s playroom is a more-than-full-time commitment. But whenever her energy flags, she remembers the importance of early intervention – and that premonition.

“It’s always there in the back of my mind, and part of the reason for thinking I’ve got to give it everything I’ve got.

“I don’t want to have regretted any minute.”

It’s important to remember that every child with Autism is different, and every child experiences the condition in very different ways.

These are the techniques that are working for Tommy and some others like him:

Find out more about Nichola and Tommy at www.aliveandwell.co

Hi Nicola-beautiful idea and a beautiful blog. Do you think the whooping cough itself is implicated in Tommys initial decline ? I am interested because Mr J. also has whooping cough BEFORE he left us temporarily.

Ant the intuition that you would outlive your son is also stunning to me. While I was pregnant I had a similar thoughts that Mr. J would leave – and he did!!
But he’s well and truly back now using all the therapies you mention. In fact as I write this he is laughing and giggling with his dad while they are doing HANDLE.

You are an amazing resource,thankyou so much, Marina

Yes, the whopping cough was definitely involved in Tom’s Autism, as well as the flu. After both there was a significant drop/regression/delay in his social skills.

The link between early childhood physical “wellness” and social skill development seems to be a common theme for many on the Spectrum.

Great to hear Mr J is going so well.
Nichola

I have watched Tommy’s remarkable improvement with excitement. Thank you for sharing your journey Nichola and for writing about it Marj. This positive story must surely encourage many who face similar challenges and expand the available information base about autism. Here’s to the future with hope and optimism!

Thank you for sharing this story. It confirms that mainstream medicine does not allow for a case by case treatment. If the family is strong and resilent then seeking alternatives is good solution and have the courage to provide hope for many to follow from sharing their experience. I have filed this in my resources tools to share with families who are in the same situation. Thank you and It will help many families in the long term from your contribution.

Great to hear there was something useful in there for you, Lionel. Please do share with others. There’s lots more where that came from on our blog! You might like to sign up for the newsletter for regular updates – http://www.aliveandwell.co

Be Natural passionately believes that real foods should be available for everyone to enjoy every single day. That’s why they’ve...
© Onya Magazine 2009 - 2021
Back to top