Australia, Your Body Image Is Out Of Whack

Youth Minister Kate Ellis announced on Tuesday that there will be a new Voluntary Industry Code of Conduct on Body Image applying to media, advertisers and fashion retailers.

The Code recommends advertisers, media and fashion designers disclose to readers when using digitally manipulated images and use models 16 years and older within a healthy weight range.

Although the code is not legislation, it is a positive development in what has become a prevalence of viewing these industries as significant contributors to the incidence of negative body image in Australian society.

As a community, we understand that the media is a powerful communicative tool. And with great power comes greater responsibility.

In a 2008 Mission Australia National Survey, ‘body image’ was rated as the third major concern of young people. It is a prevailing issue across our society, one that has enormous impact on the development of a healthy self-esteem and confidence.

And whilst the fashion industry and fashion mags have worn the brunt of criticism for promoting unrealistic standards of body and image, there seems to be another avenue of mainstream media that has so far escaped the finger of blame. 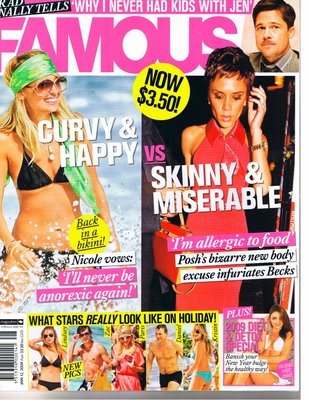 It is the weekly women’s magazines, those that promote their ideas of healthy lifestyle choices and encourage ordinary Australian woman to love themselves as they are, who are endorsing their own thinly veiled brand of negative reinforcement.

These magazines report about the latest celebrity exploits, tell the stories of everyday Australians, and provide health and lifestyle tips in attempts to appeal as popular modes of escapist entertainment.

But they are not providing a healthy message for change. They are stimulating a society obsessed with achieving unattainable standards. They continue to promote a strong cultural pressure to attain the “perfect body”, one that, evidently, does not exist.

They use the popularity of celebrity culture as a platform to sell us distorted ideas of body image. It is a sad world we live in, when these magazines are knowingly profiting off the promotion of negative self-esteem.

They fill their pages with analysis of celebrity attempts to “fight the fat” and dedicate entire issues to “the best and worst of bikini bods”, encourage readers to adopt unhealthy and unrealistic diets in order to shed the ‘flab’ and speculate that any celebrity sporting a minor weight gain is pregnant. They send conflicting messages by praising the unobtainable speed in which one celebrity achieves her post-baby body, whilst chiding another for looking “emaciated because of drugs”, when she was previously “too fat for love.”

The trash mags have taken the issue of self-loathing to extremes by shamelessly pointing out every flaw with images that have often been doctored or presenting pictures of celebrities from the most unflattering angles.

They seem to have infiltrated the space between common sense and an obsession with idealised reality so that while they appear to be waging a war against negative body image and encouraging Australians to adopt healthy lifestyles, they are merely solidifying an unrealistic and confusing message – one that encourages us to continue assessing our self-worth based on body shape.

And while they alone cannot be held responsible for this distorted image, they need to be held accountable for continuing to perpetuate a cycle of body obsession. Their message is inescapable. This fixation has seeped through the pages into an evolution of acceptance and understanding that “fat” and “skinny” become necessary terms to identify oneself.

Recently enlisted with helping a young girl put together an outfit for her eleventh birthday, I watched in amusement as she meticulously assessed each clothing item, finally settling on a dress that met all her criteria. Holding it up to her mother for final approval, I watched her excitement suddenly deflate when her mother responded “No, I think you’re a little too fat right now for something so tight.”

The eleven year old girl retreated, obviously having heard these words before, accepting that this was now another criteria in which she needed to decide her next outfit choice.

Her mother had certainly not intended to defeat her daughter’s developing self-esteem or to slowly instill a large barrier between her daughters ability to view herself as an identity and nothing more than a body shape. Her mother was merely echoing what has become an all-too familiar position for reiterating body ideals as a means of self-worth, an obvious example in how our standards of perception have been formed by this frequent and accepted use of “fat” and “skinny” in our vocabulary.

It was a similar identity discourse that I faced as a teenager. A chubby pre-adolescent, I came to associate myself with only the notion that I had an “undesirable body shape”. It was an obsession that followed me into adulthood, as I cast judgement on myself, not by any tangible accomplishments, but by how I had come to view myself in light of what I was told was either “fat” or “skinny.” 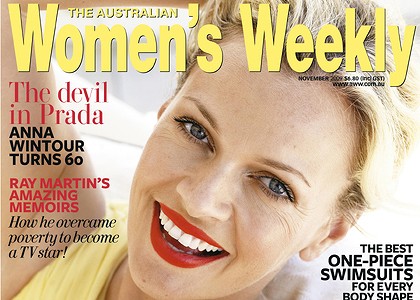 It took me nearly 15 years to dissociate myself from the idea that success and self-worth could only be found if the reflection in the mirror was “skinny” and did not replicate any of the natural ‘flaws’ that I learnt I should have no doubt been ashamed of.

So while the Australian government should be applauded for their continuing support in encouraging retailers and media industries to adopt a more responsible attitude, and models like Sarah Murdoch appearing without airbrushing on the covers of national Women’s magazines will perhaps reinforce this need to reevaluate our own attitudes to these issues, I can only hope that there will be a time when we are not encouraged to fixate on body shapes and be told to critically assess each other as a form of entertainment.

Oh Jordi, how I love your work. How did anorexia become cool and something to aspire to? Ask any man, and they will tell you, that celebrity A List thin is very unattractive. Afterall, it is curves, that make a woman, a woman. Go Sarah Murdoch, with her fabulous cover on WW. More of this I say, in the quest for women to celebrate themselves, “just as they are”.

Great Topic. Very well written.
I also struggled as a teenager with intense body image issues. It is a very strange thing how ones weight projects to the world what type of person you are. How much you eat apparently establishes how happy or depressed you are, how in control of your life you are…
Look at Oprah! She is the richest African American woman in the world. Intelligent. Successful. Massive weight issues.
Does that make her a depressed lonely weak person? Maybe, who knows?
All I know is that it makes her human.
Everyone has weaknesses hey. Oprah’s is obviously chocolate.

Great article – so true. An issue close to my heart. I don’t want my daughter to grow up with these issues and am very carful about what I say to her and in front of her about myself – that rubs off too.

By Jonathan Howcroft Fortyfivedownstairs is temporarily home to some unfamiliar residents. Some of the residents would...
© Onya Magazine 2009 - 2021
Back to top