Aussie Men Keep Matters Of The Heart Close To Chest

Desperately missing the human connection and engagement with live audiences. . Can’t wait until I can stand in front of a live audience and invite them to hug the person to their left and right to illustrate the value and importance of human connection. . Until then we’ll continue to engage people virtually about the importance, value and need to start investing into and maintaining our wellbeing. . @pukaup #wellbeing #mentalhealth

eharmony teams up with AFL legend Wayne Schwass and charity PukaUp to shine a light on men’s mental health issues.

When it comes to talking about matters of the mind and heart, Aussie blokes remain resolutely tight-lipped. Ironically, this lack of communication often intensifies emotional struggles, and is likely to be a contributing factor to the one in eight men battling depression1 and mental health issues each year.

These findings tally with new research from relationship experts at eharmony who have joined forces with former AFL star and mental health advocate Wayne Schwass via PukaUp to delve into the barriers surrounding men’s mental health.

More than half (55%) of Aussie males feel the need to hide mental health issues from their partners, while a similar number (54%) feel pressured to be their family’s financial provider, the research finds, ahead of World Mental Health Week on October 10th.

The research also finds that men often use coping strategies to deal with issues in their lives which bypass meaningful communication. When dealing with problems, Australian men prioritise taking time out on their own (56%) and taking up regular exercise (45%), above talking it through with their friends, family, or partner (37%).

But does this stem from the stigma that men shouldn’t talk about their feelings? When asked if men believe Australian society allows men to speak openly about their feelings and personal struggles, well over half (62%) believe they are encouraged to do so, but still struggle with actually doing it.

PukaUp founder, Wayne Schwass has openly shared his own experiences with depression in the past which culminated in him ‘lying, hiding and pretending’ he was happy for 12 long years. Wayne says:

“While disappointed, I’m not at all surprised by eharmony’s findings which illustrate that over half of men still hide difficult feelings from their partners, and many feel they have to find their own ways to deal with things, rather than talk things through with their loved ones or mates.

“When I had despairing feelings, I certainly felt as a man I had to contain them to some extent. But the problem is if you don’t talk to people when you’re down, things build up even more creating huge emotional isolation and disconnection. Over time, this sequence of events can actually be quite dangerous.

“That’s why I’ve taken my own experience to look at how it can help others. At PukaUp we are creating genuine and authentic conversations around mental health and emotional wellbeing– we tackle tough topics and offer resources to help build the conversational tools that might seem difficult at first but will actually help so much more in the long run.

“We are keen to break down the barriers and traditional mindsets associated with masculinity, the notion that men don’t cry, men don’t talk about their feelings – it’s just not right. We are encouraging men to not only acknowledge their feelings but to share them and reach out when they need a helping hand.”

When high achievers in the sporting world like Wayne openly share their own battles, it can help other men challenge the fear and shame that keeps them tied to ‘strong and silent’ stereotypes, according to eharmony relationship expert Sharon Draper.

“Generally, men are still conditioned to keep mental health problems to themselves because to be masculine in Australia today still broadly means exhibiting personality traits such as confidence, strength and reliability. But in persisting with these clichés we do men no favours,” she says.

“Talking to a partner – or if you’re single to a good friend or family member -about your mental health can feel like a huge leap of faith, but it gets much easier with practice.

“What’s more, we know the dating world can be brutal at times, and while single women often talk to their friends about their dating experiences, men are less keen. So, where do they get support in matters of the heart?”

Sharon adds: “The good news is while we know that over half of men in relationships feel they need to hide depressive feelings from their partners, just under half (39%) say they feel more comfortable and confident when they’re in in a solid relationship.

“At eharmony we match people based on their shared core values and personality traits, meaning they are more likely to be in sync emotionally and share good communication skills. This all helps keep relationships happy and healthy.”

BLEACH* Festival To Flood The Goldy With Contemporary Art 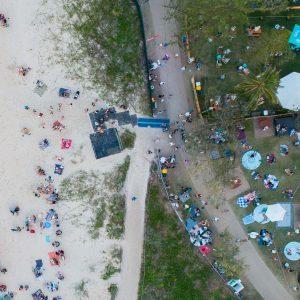 BLEACH* Festival To Flood The Goldy With Contemporary Art

Placemakers* Gold Coast is pleased to announce the return of Bleach* Festival in 2020, taking place in springtime at the new time...
© Onya Magazine 2009 - 2020
Back to top