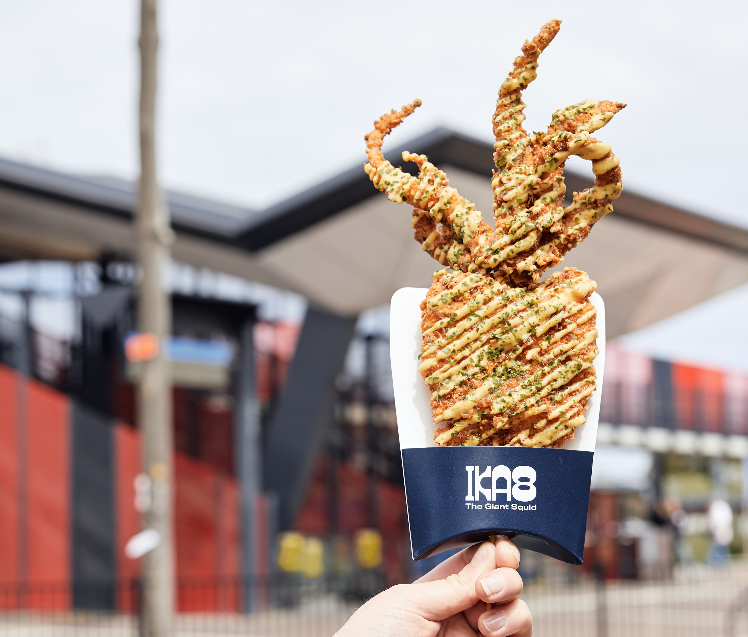 Wandering through the back streets of South East Asia, tourists and locals alike are enthralled by the abundance of flavours and aromas from local food vendors lined along the streets. A vibrant culture that celebrates fresh ingredients, traditional flavours and unites people, South East Asia has captivated Melbourne’s food scene for many years.

Now, the ‘giant squid’, a common savoury street food snack is making its mark on Melbourne. A versatile, delicate and succulent treat, giant squid brings cooking theatrics to the streets with the famous ‘giant squid’ dishes cooked openly on the fire grill or fried in sizzling oil. Bringing out the adventurous side of all food lovers, giant squid on a stick are as-big-as-your-hand and pack a bunch of flavour and fun into each bite. Opening with a grand launch on October 20-21, IKA8 is redefining squid with Melbourne’s first quick service and squid-centric store, located directly opposite Footscray Station in between Footscray Market and Chatime at 24 Irving Street, Footscray. On opening weekend, IKA8 will be offering 2 for 1 giant squids to all customers.

Not just your average meal, squid is a fascinating creature of the sea available all year round that is bursting with flavour, texture and has the ability to transform into various shapes. IKA8 aims to quash any misconceptions of squid being chewy, tough or expensive and rather create a food movement that showcases to Melbourne and beyond how to rediscover and celebrate all things squid.

IKA8 Directors CJ Duong and Jenny Pham have over 26 years’ experience between them in the food and marketing industry. They both love the hustle and bustle of street food from Asia and the joy of sharing, and wanted to bring a new, bold and exciting concept to Melbourne which celebrates and pays homage to South East Asia.

“Squid is a welcomed favourite in Asian restaurants, yum cha, pubs and street festivals across South East Asia but is still yet to be celebrated in all its glory across Australia. In a time where consumers dare to be adventurous, and squid is more regularly seen on menus, it seems to be the right opportunity for IKA8 to fill the gap in the market for a squid-focused QSR that transports people back to where it all began,” Jenny Pham.

Head chef Eddie has had over 17 years’ experience in the food industry where he has worked at renowned restaurants such as Calia Emporium, Feathertop, Taxi Kitchen and Ma Pasion. Eddie focuses on modern, Asian, and experiment cuisines and brings his passion, attention to detail and artistry to every dish. His experience helps reinvent this favoured product into 2018.

“I am inspired by the myriad of sweet, salty, spicy, sour and fresh flavour’s, which come at you from the Hawker Stalls of street corners all throughout South East Asia. These fragrant smells represent so many childhood memories for me and are an expression of Vietnam, Singapore, Thailand, Japan and Hong Kong. I believe that real cooking is about following your heart down these streets and rediscovering food and culture. That is what we are aiming to recreate at IKA8,” Eddie Huynh.

The distinctive store interiors have been designed by acclaimed architects, EAT and feature the deep navy tones of the eye-catching exterior artwork designed by awarding-winning graphic design studio, Principle Design which together make a bold statement for passers-by.

“The darker shopfront and graphic decals that frame the window allows a glimpse into the contrasting brighter interior space, which features full height brushed stainless steel wall panels to add depth in the space. Curved timber panels and mesh are layered to define the servery counter with open kitchen behind. The curves are echoed throughout the dining area with the custom bench seating and fixed tables rebated with textured navy tiles and brass trim detailing,” EAT Architecture.

IKA means squid in Japanese and is a testament to IKA8’s devotion to prompting awareness and intrigue for this versatile item. Here is 8 reasons why IKA8 loves squid:

Four Pillars Eases Christmas Shopping - Drink While You Shop At Pop Up Distillery!

Digital Richmond: How Richmond Became The Tech Hub Of Melbourne

This is a great news. Thank you. 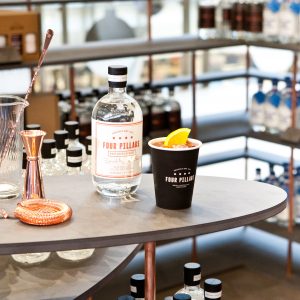 Four Pillars Eases Christmas Shopping - Drink While You Shop At Pop Up Distillery!

Christmas has come early for gin fans in Melbourne with Four Pillars today opening its first ever pop-up distillery door...
© Onya Magazine 2009 - 2021
Back to top