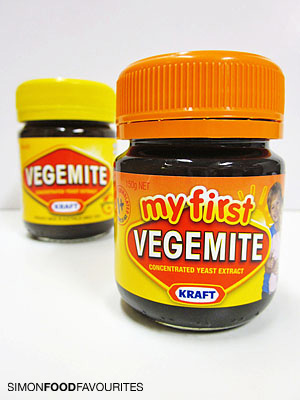 Often you’ll find me searching pantry shelves for school lunch sandwich fillings. It’s the end of the week, when I need to visit the supermarket to replenish supplies and when I don’t know what else to spread two slices of buttered bread with that my hand always grabs the old favourite, the spread everyone in the house loves, it’s the jar of Vegemite.

Vegemite has been made in Australia for more than 85 years. The spread dates back to 1922. Vegemite is one of the world’s richest sources of B vitamins. It contains virtually no fat.

The dark brown paste made from yeast extract, with its salty, slightly bitter intense flavour is an Australian icon. It’s a big part of Australia’s history. Over 22 million jars of the spread are sold every year. Whereever Australians find themselves in the world, a jar of Vegemite is a taste of home.

It’s taken 5 years for Kraft Foods Australia/New Zealand to formulate a new Vegemite spread for a younger palette. Specifically the palette of those aged 1-3 years. The new product now standing beside the original jar of Vegemite on supermarket shelves is My First Vegemite.

My First Vegemite has the same unique vegemite flavour, but it’s a touch milder with extra vitamins, added iron and 50 per cent less sodium.

My First Vegemite delivers a product perfect for little people. It’s lower in sugar and sodium, with increased iron, B12 and B6 vitamins. Vitamins B12 and B6 are essential for healthy red blood cell development, a strong immune system and brain function. My First Vegemite enables parents to introduce the specially formulated vegemite spread with confidence, knowing the spread is supporting healthy growing bodies.

I like the idea of introducing less salty foods into a child’s diet. Personally I don’t want my children developing a taste for salt. My First Vegemite has certainly passed the taste test in our house. It’s already a favourite!

A 150g jar of My First Vegemite, with its orange cap, will be making its way into my supermarket trolley from now on. While My First Vegemite is being marketed as suitable for children over the age of one and up to three,  our household is about to replace the original yellow capped jar of Vegemite for this new distinctive orange capped jar with its milder tasting dark brown almost black spread.

We’ll continue Aussie tradition by spreading Vegemite on servings of toast and crumpets for breakfast.

Just to let u know my first Vegemite actually has twice the amount of sugar than the regular one. Its on the label.

On Wednesday the 16th of February, I headed to Stables Shopping Centre in Mill Park, Melbourne, for the opening of Savers’...
© Onya Magazine 2009 - 2020
Back to top