Modern conveniences do a multitude of useful things, but up until recently we’ve had to exercise patience with wine’s natural aging process. Not so, it seems, as five wineries in China kicked off trials late last year using electric fields to speed up the wine maturation process to create an aged version of a young wine immediately. Discerning palates watch out! Or something like that. It screams of the laziness and cheap, immediacy of modern living which as per usual demands on-line, upfront appeal over the rewards of patience.

The process developed at a South China university in the bustling town of Guangzhou, involves pumping the wine through pipes running between titanium electrodes pulsing with a high-voltage charge. This process is touted as a break through for China’s fledgling wine industry, enabling young wine to be consumed more quickly, and to provide drinkable wine for a rapidly rising demand well before the wine has matured post the initial fermentation period. As a large scale process, it usurps industry gimmicks like the Clef du Vin (a kind of magnet dipped in a wine to “soften” the flavour profile) and the “Ultrasonic Wine Ager” (a kind of bucket that sends “ultrasonic waves” through a wine bottle to age it prematurely) previously known for their bucket science approach to wine aging. Strictly for the dorks, gullible and impatient non-traditionalists, these gizmos find a strange audience sitting somewhere between wine nerds who know better, and an aspirational punter market keen on new sophistication from their “tastes old” wines. 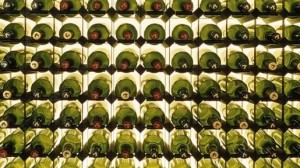 However, new technology in wine is a continuing hit and miss process. Australian innovation has assisted a burgeoning industry and dragged other nations up to higher standards of fruit cleanliness and early, appreciated drinking without the inhumanity of electronics and strange future machines. The chemist in charge of the electric field experiments from the South China University of Technology tested parcels of three month old Cabernet Sauvignon for chemical changes and tactile “mouth feel and quality” when exposing wine to one, three and eight minute bursts of electricity.

”The results were striking. With the gentlest treatment, the harsh astringent wine grew softer. Longer exposure saw some of the hallmarks of ageing emerge – a more mature nose, better balance and greater complexity,” New Scientist reported.

Dr Zeng, the chemist in charge of the Frankenstein wine experimentation, also discovered that excessive exposure to the electrical fields for long periods made the wine ”worse than the untreated original”. The charlatan appeal is always to make cheap wine taste better. Regardless of the guise, cheap wine is cheap wine. There is a call to relevancy in the shortening of the maturation process for mass produced wines, but only in as much as the wine becomes a beverage and no longer a process of traditional winemaking. Sure, more affordable wine often comes from factory-like wine super-facilities that resemble industrial plants rather than wineries, but an adherence to quality of fruit for best result should override the ambitions of modern science. The risk versus benefit here is the undermining of another traditional and personality infused industry that can celebrate the diversity, history and organic influence over the steely resolve of scientific advancement. Lofty thinking… indeed.

By Jonathan Howcroft I write this knowing only the vaguest of rumours circulating the death of Michael Jackson. I'm certain...
© Onya Magazine 2009 - 2021
Back to top