This weekend, 31 October – 1 November 2015, the Four Pillars Distillery is officially open for business and kicks off with a weekend full of masterclasses, tours and world’s best practise gin drinks at its new home in Healesville, Yarra Valley, about an hour’s drive from the Melbourne CBD.

The former timber yard, on the corner of Maroondah Highway and Lilydale Road, has been transformed into a fully functioning distillery operation over 700 square metres, featuring their two German sister-stills Wilma and Jude, (and soon their miniature sister Eileen) and a new hospitality space showcasing the many facets of gin.

At the Distillery Door you’ll find all five Four Pillars Gins for tasting and sale, a long copper bar serving paddles of G&T three ways, build your own Negronis, Scotty’s Ginger Mules (gin and ginger beer), really good nuts and olives, marmalade on toast, great coffee and even beer and wine if you ask real nice.

They also have a state-of-the art Hoshizaki ice machine, great glassware and are slowly building up their quite unrefined but enthusiastic cocktail making skills; so expect some more gin cocktails and flash new shaking to be added to their repertoire over the summer and beyond.

Managed by resident ginger, Scott Gauld, the Distillery Door is open Thursdays – Mondays 10.30-5.30pm, and later when they have something exciting to celebrate (like this weekend when they will be open till 9pm Saturday and Sunday). The Distillery has seating both inside and out and also regularly host tours and masterclasses run by distiller and Healesville local, Cameron Mackenzie, the heart and soul of Four Pillars Gin.

At the back of house they have what will eventually become one of the finest distilleries in Australia. Wilma, the 450L Carl still has been joined by her slightly larger sister Jude (600L), with her tiny sibling Eileen (50L) arriving in early 2016.  These two new stills will provide extra capacity and importantly flexibility to make not only their Rare Dry, Barrel Aged, Spiced Negroni and Navy Strength gins but also a host of other experimental and occasionally random gins; Bloody Shiraz Gin anyone?

Four Pillars Gin launched in December 2013 and has gone on to win a swag of awards at home and around the globe. See you at the Distillery.

Four Pillars Distillery, 2A Lilydale Road, Healesville. Four Pillars gins are available at the distillery door, at www.fourpillarsgin.com.au and at most good liquor stores, bars and restaurants across Australia. 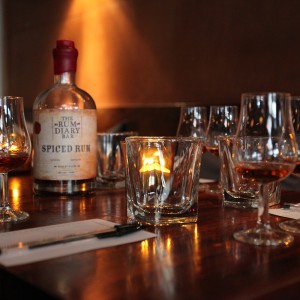 Traditionally the drink of pirates and sailors, The Rum Diary Bar has created a premium spiced rum product that everyone...
© Onya Magazine 2009 - 2021
Back to top