Female-Led Brewpub With A Twist Opens in Adelaide CBD

Adelaide’s newest brewpub Sparkke at the Whitmore has revamped a historic hotel and ignited a social revolution with the world’s best conversation starter – beer.

“We estimate we’ll consume about 600 of those in the pub and the balance will be sold wholesale to independent bars and restaurants,” Agi says.

“Local and national collaboration is a big part of who we are and what we do – our 100 per cent natural beer, wine, cider and hard lemonade each raise funds and awareness for a dedicated cause,” Agi says.

“We can’t wait to open the doors and share this new venue with everyone, to enjoy quality products from crafty like-minded producers, and give punters an inclusive, nurturing space.

“It’s an exciting time for the Sparkke family.”

Sparkke at the Whitmore’s impressively petite menu has a sustainable focus and vegetarian base – always with a meaty option – and bold cocktails feature in the up-lit downstairs bar beside Agi’s magic metal brew lab.

The venue has a lift for full wheelchair access, and features reclaimed and sustainable materials, boutique and large function rooms, and preserved historic architecture.

General manager Alison James says the renovation revealed secrets up to 150-years-old, including a mesmerising shingle ceiling and a “pub within a pub”.

“We discovered an external wall inside the building, from its first life as the Queens Arms Tavern – licensed to Thomas Maslin in 1838, two years after Adelaide was colonised – that had been enveloped in a previous build,” she says.

“We have preserved several awesome historic finds, along with the building’s striking ironstone facade.”

Sparkke launched in November 2016 with the largest online pre-sale alcohol campaign in Australia. 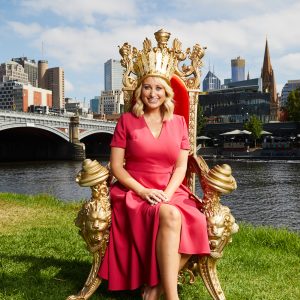 Sandi Sieger chats to weather analyst, television and radio presenter, Jane Bunn, on breaking into a competitive industry,...
© Onya Magazine 2009 - 2021
Back to top