Whilst I’ve done time balancing goon with cracker barrel cheese, and enjoyed the rare bottle of Perrier Jouet on my mother’s innumerable ‘50th’ birthdays, I admit that I’ve never taken the time to peruse the cellar racks with an educated palate. It’s difficult to begin wine tasting when you’ve little idea what exactly your buds are supposed to be appreciating, and how one manages to look confident and proficient at this art.

Established by Drs. Ken and Miranda Jones in 1988, Big Shed Wines is situated on the Daylesford-Malmsbury Road between Glenlyon and Denver, about 15 km from Daylesford, Victoria. Aside from the impressive variety of cold climate wines available at the cellar door, it is a vineyard that’s outstanding at teaching the newcomer to appreciate a good grape. Upon arriving one wet day, and sloshing my way to their warm and olde English tavern-style cellar, I was greeted by a broad array of red and white wines, locally made olive oils, and the hilarious and informative winemaker Felix Jones. 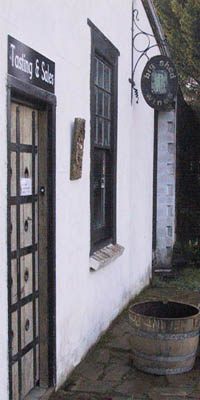 Big Shed Wines are hand-made, with minimal use of preservatives and no animal products. Amidst their library of wines, Big Shed features a preservative free 2005 Cabernets and 2004 Bendigo Shiraz. Their 2004 Cabernets has reeled in a hoard of awards, including a silver medal at the 2006 Victorian Wines Show, and in 2008 a five star rating from Winestate Magazine. It is their 2006 Chardonnay, with it’s recent awarding of Best in Show at the Kyneton Show, that comes with a story as delicious as the white itself. “When we were blending the ’06 Chardonnay I came across a batch that didn’t smell quite the same as the others, so we decided to keep it in the barrel a little longer,” explained co-owner of the estate, Dr. Miranda Jones. Three months later, despite tasting the barrel and not thinking anything phenomenal of the wine, the strange brew was bottled. It wasn’t until Miranda visited the cellar to retrieve wines for competition that she considered the odd Chardonnay, “The rest of the ’06 Chardonnay was stacked out of my reach, so I simply grabbed a bottle from the batch that had been put aside,” she said. Through her default selection, the Chardonnay managed to stand on its own and thoroughly impress the Kyneton Show judges with its oaky taste and enjoyable length, “I just wish we could decipher which barrel it was that we used, so we could do it again,” Miranda added smilingly.

While the ‘06 Chardonnay slid down pleasantly, it was Big Shed’s Muscat that held my buds in a state of rapture. The fortified wine hailed a distinctly sultana taste upon hitting the palette, and finished with a nectar-like impression once the, what can only be called a potion, had melted softly somewhere in my throat. With the tasting room open every day from 10am until 6pm in winter, and 10am until 7pm in summer, Big Shed Wines is a must-visit for anyone following the winding roads of the Macedon Ranges in the hopes of finding a welcoming cellar and a delicious drop.

Big Shed Wines are available to purchase online at: www.bigshedwines.com.au

And if you’re wanting to drop in sometime:

Y-Yo, An Ethical Approach to Cosmetics

I went to Big Shed a while ago with some friends, Felix is not only Hilarious but every girl’s dream. Every one of us agreed… amusing, self effacing, smart and just a bit dangerous, we love Big Shed!

Absolutely agree yvonne. I didn’t want to leave. He should have an agent or something. He deserves to be famous.

You know Felix died right? Suspected heroin overdose. Makes sense, he was about as rock n roll as you can get.

Oh man… You’re kidding. I’ve never met a cellar door guy as good as him, and as it turns out, a better drummer. I saw him play once and I couldn’t believe it. John Bonham would have turned over in his grave.

His rather beautiful girlfriend/wife and serious star Emma was killed recently as well. There was a real legend about these two. I met them at the winery god knows when. Been friends ever since. RIP my friends.

Y-Yo, An Ethical Approach to Cosmetics

Y-Yo is a cosmetics range that specialises in fragrances made from a sensuous blend of oils extracted from plants....
© Onya Magazine 2009 - 2021
Back to top