The collaboration came to fruition after Holly connected with Edouard back in 2017 during a research visit to Cognac to explore the Charentaise distillation method (the method of producing grape based eau de vie through double distillation using an alembic pot still and open flame) – a technique which has inspired B&F’s distillation process since its inception in 2009.

“As we approached the 10-year mark, I felt we had to do something special to commemorate the milestone, and what better way than with an exciting, limited-edition release like no other, an ‘old-world meets new’ brandy that encapsulates Bass & Flinders’ story and ethos,” Holly said.

“I knew with Edouard’s family lineage, recognised as one of the most highly regarded cognac specialists in the region, that he would be the perfect craftsman to assist me executing my idea for this brandy blend, that honours the two worlds and family traditions.”

Both distilleries have the same philosophy: nothing artificial, small volume and high quality – making the collaboration a match made in heaven. Usually, when blending, a distiller will reference from past blends and batches to draw inspiration from, but in this instance, they were working from a blank canvas and an idea.

Before the two set to work, they established a few goals: the product would represent both styles equally, would only use natural elements (nothing artificial) and would achieve a full and broad reaching aroma.

The creation was an iterative process of trial and error, working predominately with their noses to sort through the various layers and aromas that could meld together for the perfect blend.

Holly brought several barrel samples with her to trial in various blends with the N-M cognac, and the pair selected their favourite of the B&F – N-M samples to create the base of the Anniversary Cuvée.

“We went through barrel after barrel to nose each and every character and layer until we found some common threads that we felt would marry nicely in the collaborative blend, before settling on 2014 Petite Champagne cognac,” Holly said.

Those lucky enough to nab a bottle of the single-release can expect a refined combination of aromatically sweet, expressive Chardonnay-based brandy, with the silky smoothness and floral delicacy of the Petite Champagne cognac on the palette.

“It’s not too heavily oaked and will let the B&F brandy character and fruitiness shine through on the nose but has a floral bouquet that adds a unique accent to the blend,” Edouard said.

Anniversary Cuvée is retailing for $250 for the 700ml bottles in market and will be available for purchase on the Bass & Flinders Distillery website.

In celebration of the limited-edition release brandy blend, B&F is hosting a one-off 10th anniversary dinner, to be held on Saturday 16th November at B&F’s distillery. Guest will get the chance to sample the Anniversary Cuvée, and purchase one of the first 50 bottles created, which will be hand-numbered to commemorate the special release.

The dinner will be hosted by second generation distiller, Holly Klintworth, where handcrafted spirits and local wine will be paired with the three-course menu inspired by B&F’s home region. Hosted on the distillery floor, which is normally closed to the public, guests will also be entertained by live acoustic musician, Daniel Ryan.

“We wanted to offer guests a unique experience that will make them fall in love with the region, Bass & Flinders, and of course the Anniversary Cuvée. They will experience first-hand what we do, surrounded by the distilling equipment, at the heart of the business, with our alembic pot still operating during the course of the evening,” Holly said. 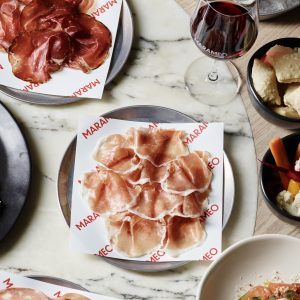 A cheeky new Italian all-day dining venue has come out to play, brought to the city by the team behind CBD institution...
© Onya Magazine 2009 - 2021
Back to top