A Guide To The Top Sustainable Brewers, Winemakers & Distillers In Australia

With summer officially underway from this week, Tourism Australia is sharing a guide to some of the top brewers, winemakers and distillers who are serving up eco-friendly drinks – so you can enjoy a refreshing beverage that’s also good for the planet!

There are no fewer than 18 beers on tap at the Capital Brewing Co.’s Fyshwick headquarters, but the size of its range is not the boutique brewer’s biggest achievement. Far more impressive is the fact that Capital Brewing – currently awaiting certification as a BCorp company – has built one of Australia’s most sustainable breweries.

Capital Brewing Co. is a business that has a purpose beyond profit, and is committed to doing good for the environment, its employees, its customers and its community. For example, they work closely with local businesses including ONA Coffee, which supplies the coffee used in their First Tracks Imperial Stout.

The brewery has examined every aspect of its operations to identify ways to reduce environmental impacts. That includes reusing the grain and hops by-products as cattle feed and as organic compost. A grain silo has also been installed to allow for bulk deliveries, which has reduced freight movements and eliminated up to 300 25kg plastic bags a week.

The brewery is powered by green energy (generated from natural resources) and every piece of equipment has been selected for its efficiency. Variable speed drivers on the refrigeration units and a heat exchange lower energy consumption, while a centrifuge that recovers more beer per batch is among the many water saving initiatives.

A converted 100-year-old locomotive workshop in South Eveleigh is home to Sydney’s most sustainable bar. Owner Matt Whiley has demonstrated his commitment to zero-waste cocktails at his other outlets, including London’s Scout bar, but at Re- bar, the world’s first permanent no-waste bar, he raises the bar yet again.

Every element of the interior design reuses or recycles elements that would otherwise be sent to the waste pile. The staircase and the bar were built using a “terrazzo” made from recycled plastic bags and milk bottles, the “leather” covering the seating is made from pineapple-leaf fibre, and the light fittings and wine coolers are made from mycelium.

The drinks list is designed around produce salvaged from local markets, such as a syrup made from banana skins. Drinks are served in imperfect Maison Balzac glasses diverted from the scrap heap, and even the house wines by Latta Vino come in 10-litre ‘goon bags’ rather than bottles. (For those wondering, a goon bag is slang for an airtight bag of wine that is served in carton box, also known as bag-in-a-box wine).

The food menu is also designed by Alex Prichard, head chef of Icebergs Dining Room & Bar, using leftover ingredients from his kitchen, including puffed wagyu tendons sprinkled with togarashi and a sorbet made with fermented pineapple skin and plum. 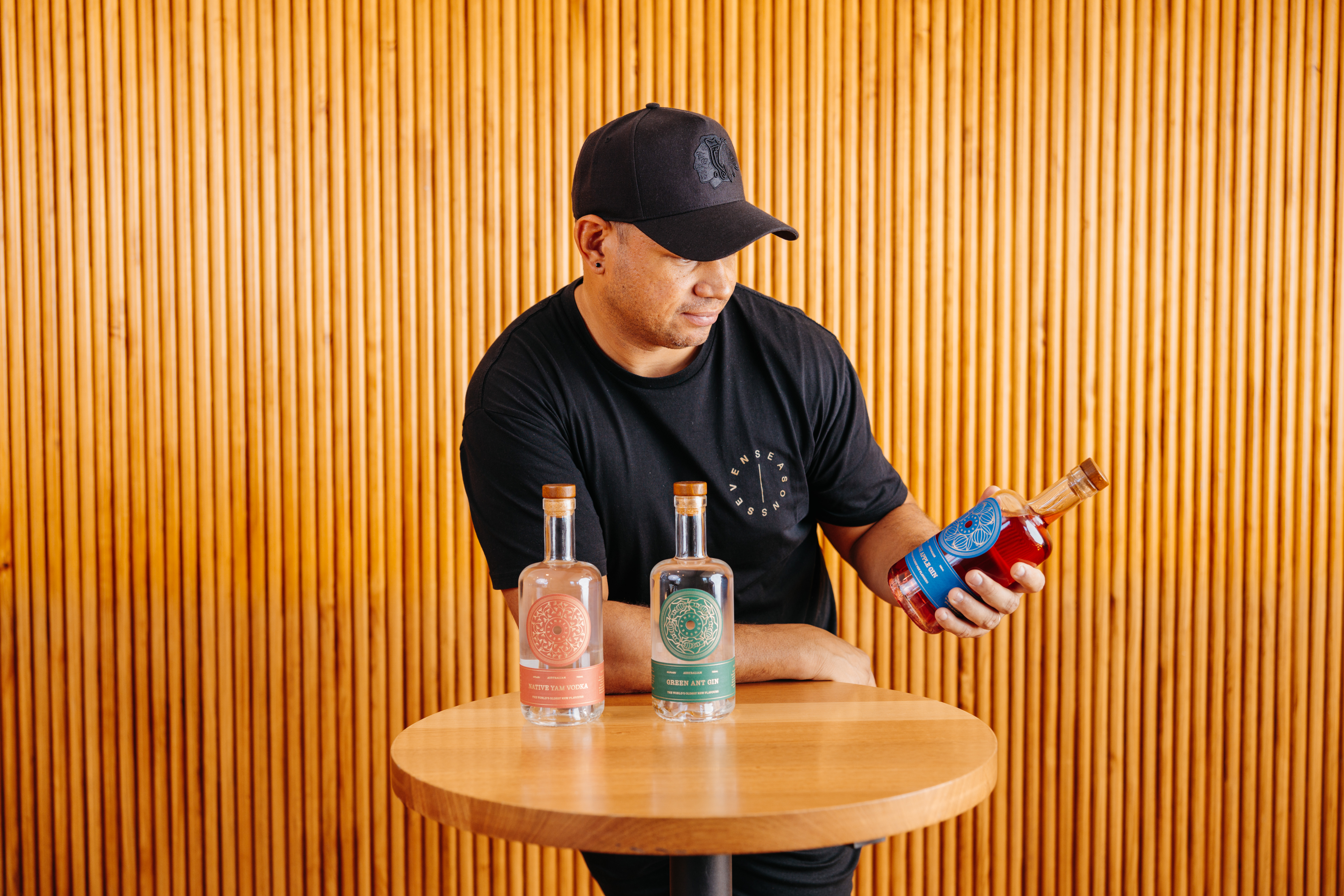 For the Larrakia peoples of the Top End, the year is divided into seven separate seasons, not four, and each one marked by the arrival of insects, fruiting plants or other natural cycles. When former AFL player and Larrakia man, Daniel Motlop, launched a spirits company drawing on native flavours, the name Seven Seasons Spirits was a no-brainer.

His first release, Green Ant Gin, was an instant success, drawing its fresh citrus flavours from the native green ants harvested during the windy season (August – September). That was followed by the Bush Apple Gin, which has a soft pink hue and berry and orange blossom notes courtesy of the bush apples harvested in the monsoon season (January – February).

Motlop has plans for more releases including a native yam vodka and hopes that in addition to providing employment opportunities for his people, Seven Seasons Spirits will bring the culture, the learning and the ingredients of the Larrakia to a wider audience. Seven Seasons gin is available at liquor stores across Australia and is stocked in many bars.

What you decide to put in your morning cup of coffee can have a significant effect on the lives of growers half a world away. With that in mind, when Karen and Richard Barnett set out to launch a new business 20 years ago, they decided to open Queensland’s first Fairtrade and organic roasters.

For the Barnetts supporting their local community is just as important. In addition to giving many young people their first experience of paid employment, they take pride in hiring employees who might otherwise struggle to find a job, such as parents who need working hours that allow them to drop off and pick up their children. 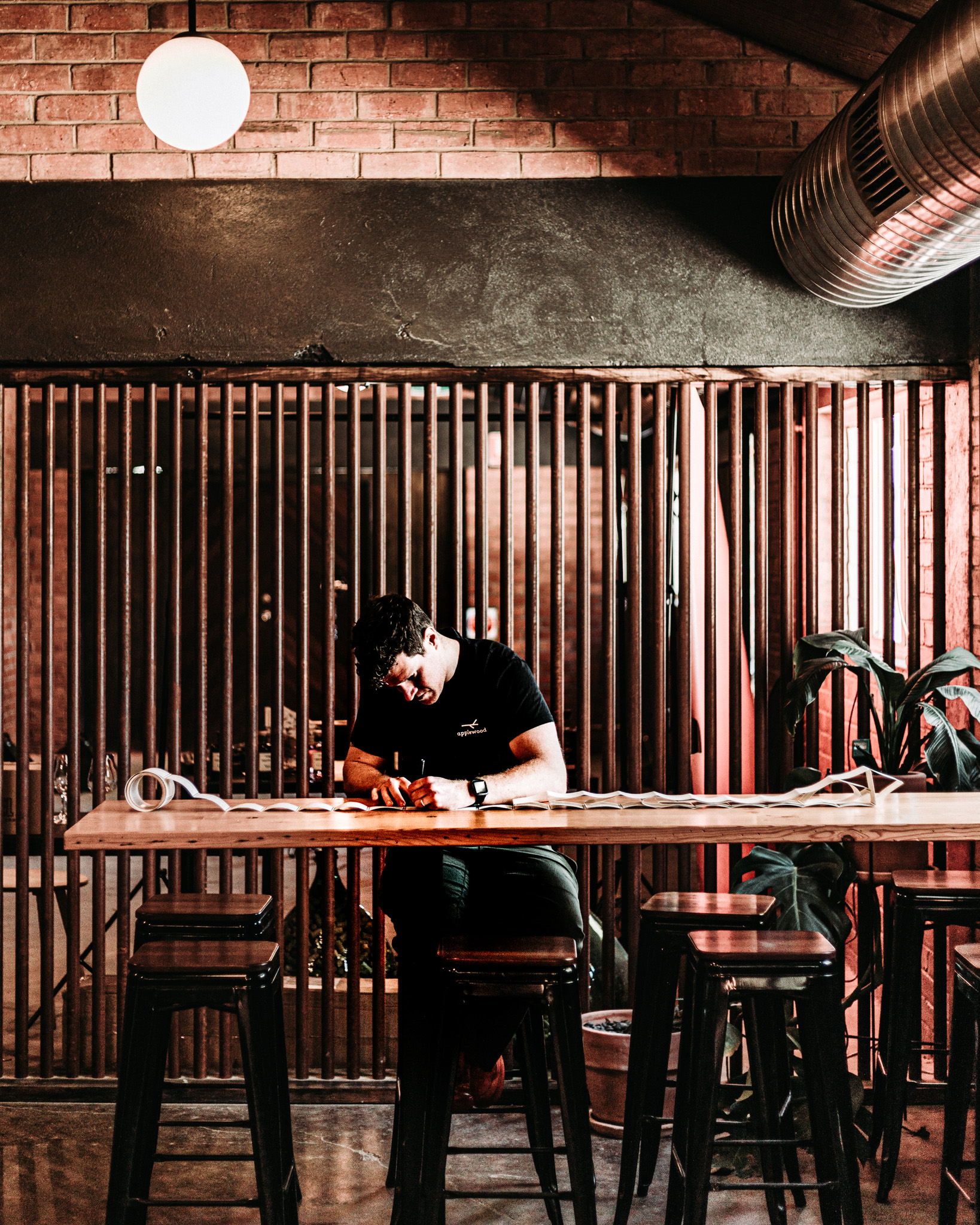 Many people are surprised to learn how water-hungry the wine industry is. That is why, when Brendan Carter set up his sustainable Adelaide Hills winery, Unico Zelo, he chose to plant grape varietals that didn’t need irrigation, thereby reducing his operational impacts.

Ready to tackle another challenge, Carter then set up Applewood Distillery to support farmers and Indigenous communities working with native ingredients. In addition to his core range of gins, Carter releases a limited edition gin every month, each one showcasing a different Indigenous botanical. With more than two dozen gins released so far featuring native plants such as Kakadu plum, lemon aspen and muntrie, Carter says he has identified enough aromatic ingredients to keep the series going for several years yet, bringing a much-needed source of income to remote communities and small-scale farmers alike.

The owners of Tasmania’s first 100 per cent off-grid winery know a thing or two about turning challenges into opportunities. When the team at Moores Hill Estate, located near Launceston, decided it was time to stop outsourcing and bring all their operations on-site, they realised it was a chance to prioritise minimising their environmental footprint. They invested in a range of equipment including a solar power array and on-site waste treatment.

Their status as Tasmania’s first solar-powered winery has brought Moore’s Hill Estate considerable acclaim, but the winery’s cool-climate drops – the small winery produces a surprising array of styles, from sparkling wine, Riesling and pinot gris to rose and pinot noir – stand on their own merits. The minimal-intervention wines are made using grapes handpicked from the seven hectares of wines and the winery team is working towards organic status. The aim is to create wines that are not just low-impact but that reflect the specific patch of ground on which they were grown. 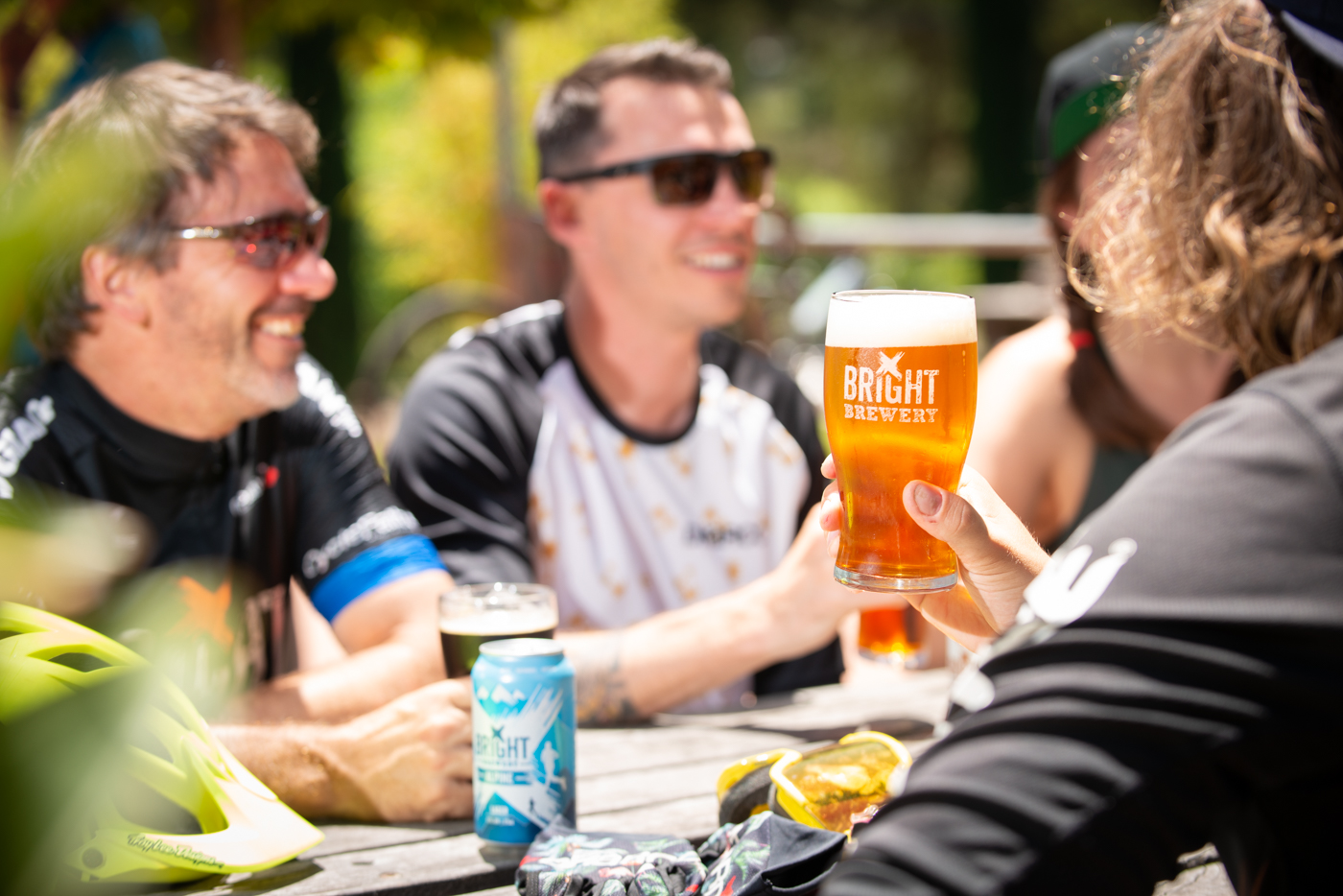 Step inside Bright Brewery in the Alpine town of Bright in North East Victoria and it’s clear that this is a business that consciously thinks sustainable for all elements of their business: just check out the old beer kegs reinvented as sinks and the delivery pallets finding a second life in the restaurant. In fact, sustainability has been one of the brewery’s key values since it was founded 15 years ago.

The brewery buys local wherever possible, both for its beers – using Australian malts and sourcing its hops from a nearby hops farm – and for the on-site restaurant. Foraged ingredients such as mint bush and pepperberry also appear occasionally in some of the seasonal and limited release brews.

A green transport scheme rewards employees for leaving the car at home, and reuse is common: shredded wastepaper is used when shipping boxes. The brewery owns its own herd of cows, which are fed on the grain by-products of the brewing process.

The brewery’s latest innovation is switching from bottling to canning its beers, a move that brings a range of benefits. Not only is aluminium more easily recycled than glass, but it is also cheaper to freight, requiring less fuel in the process.

Western Australia: Wines Of While

It was the taste that first drew Sam Winfield to natural wines. Winfield, now the owner of Wines Of While, was so intrigued by the broad range of flavours he found in low-intervention wines that he started delving deeply into the field. What he discovered inspired him to open Wines of While, Perth’s first bar and shop dedicated to natural wines.

Winfield stocks hundreds of wines from around the world, all of which have been grown using organic or biodynamic practices and hand-harvested. In addition, they use only naturally-occurring yeasts, have nothing added during the winemaking process and are not fined or filtered. Many of the winemakers are young and working small plots outside the major wine areas. If you are keen to try some of Western Australia’s best natural wines, be sure to ask about Si Vintners in Rosa Glen, Express Winemakers at Mount Barker or Margaret River’s Blind Corner.

Make A Splash This Summer In The Grampians 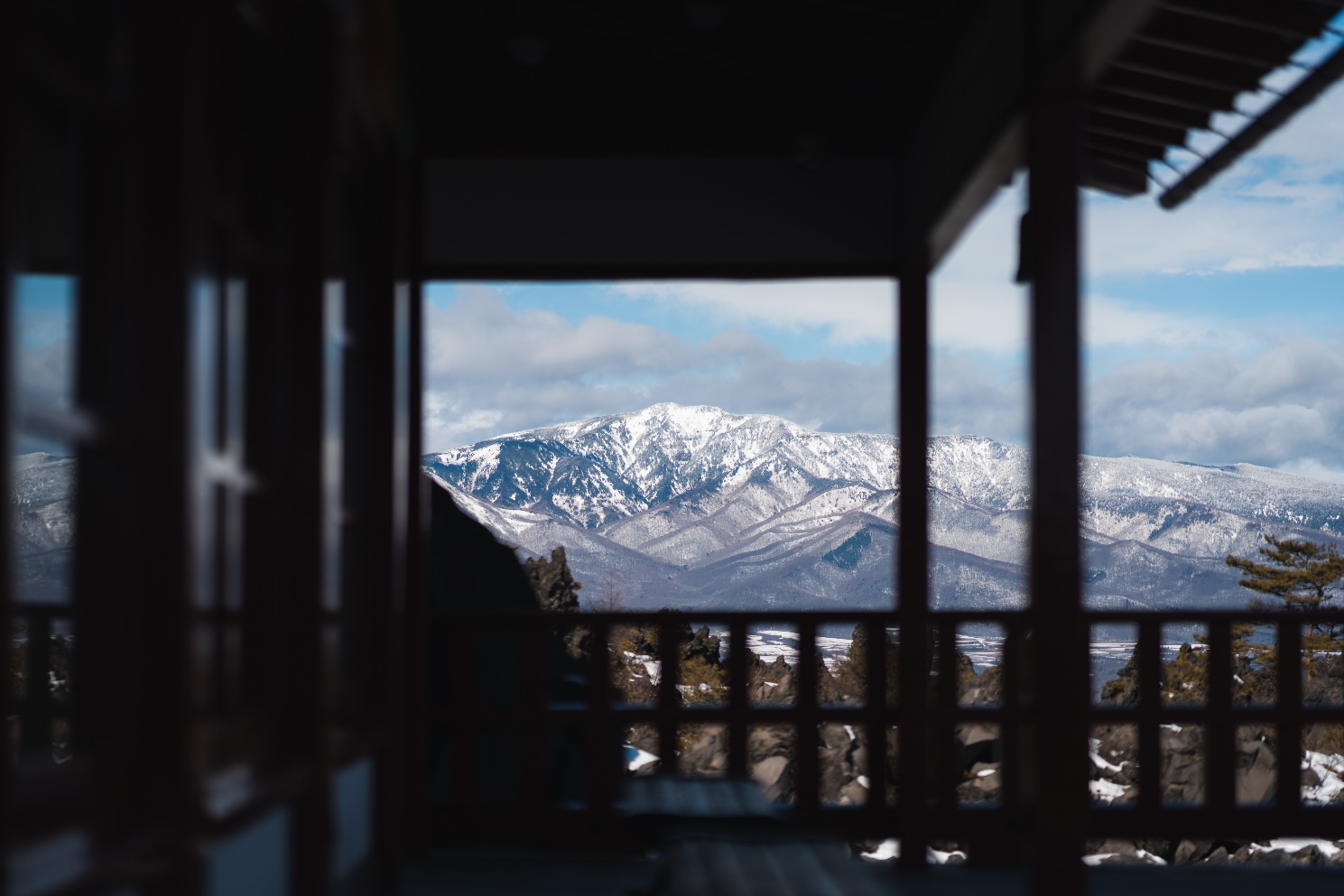 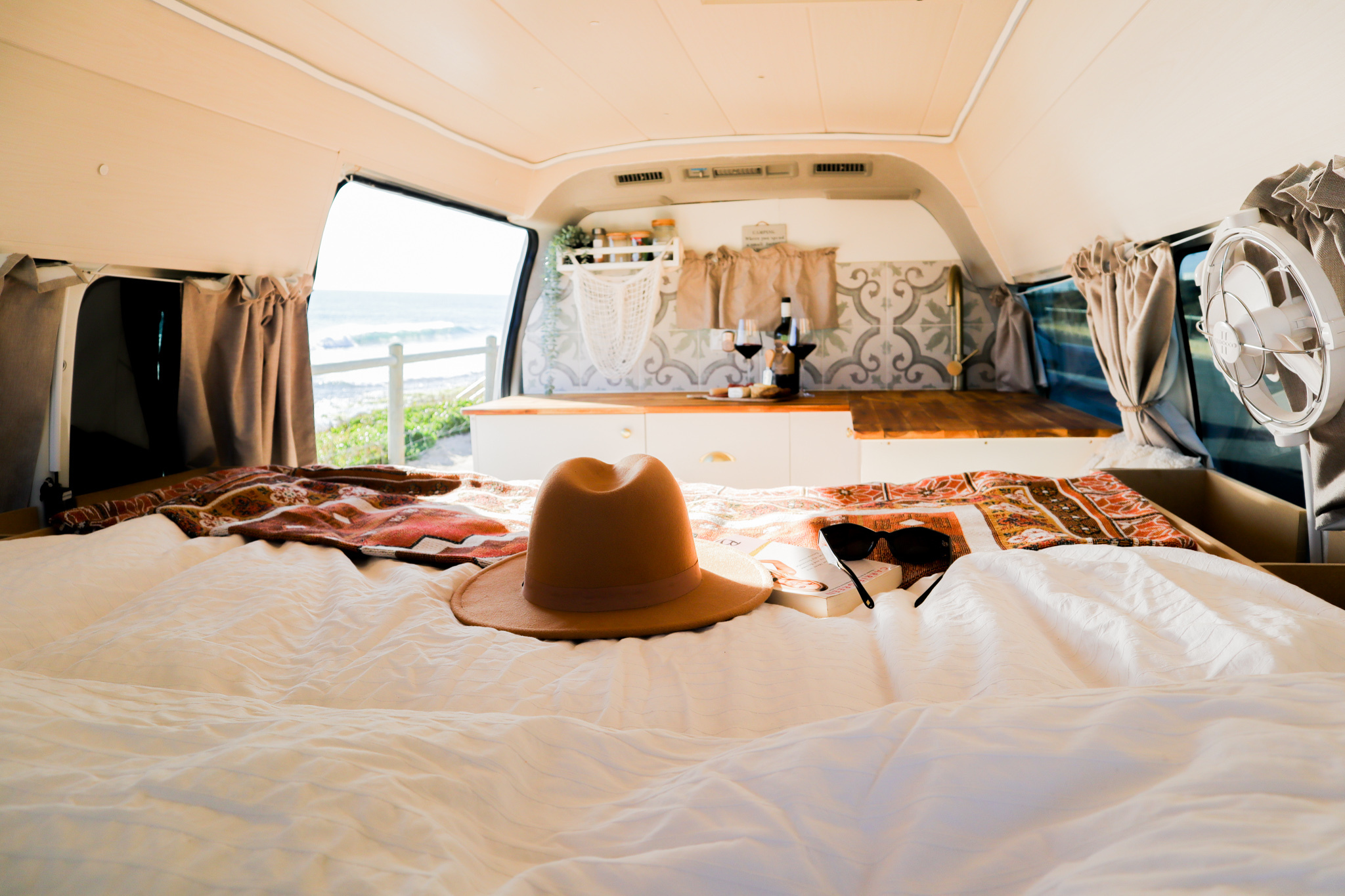 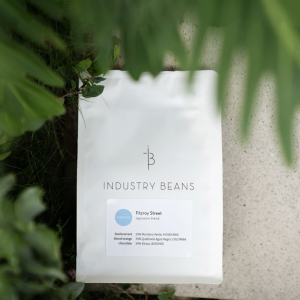 Industry Beans' new flagship venue brings a converted warehouse in the backstreets of Fitzroy to life with a fresh,...
© Onya Magazine 2009 - 2021
Back to top