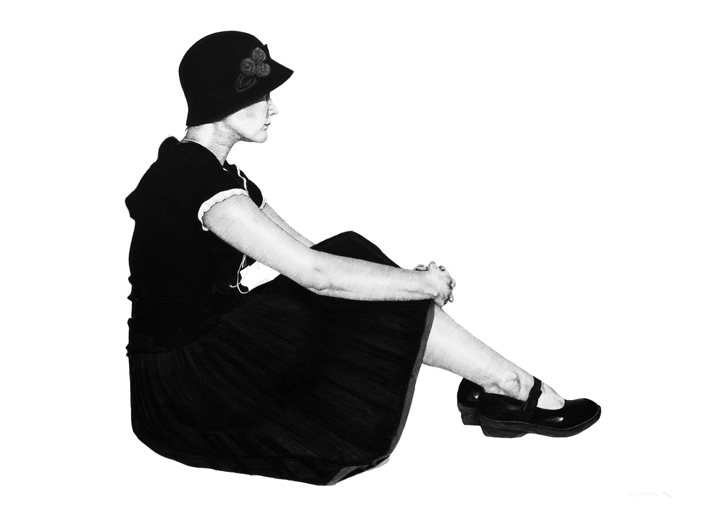 What interests you about the female form?

Both male and female forms interest me. However, I guess I am more drawn to the female form in my work for political reasons, and the simple fact that I am female and I mostly use myself as a model. In terms of the political: I’m tired of the overabundance of sexualized imagery of women in contemporary artwork and media. Women have more to offer than beauty and flesh.

Have you had any negative responses to your work?

Of course. I think people react to it for all different reasons. I’ve had a lot of people who don’t think it is ‘appealing’ enough or are confronted by the subject matter, but I don’t think all art should be just made to be appealing, or make people comfortable. Not that I think everything should be outrageous and shocking. But when you’re making work to convey an idea it’s probably not going to be something that people necessarily want to hang on their living room wall. That’s fine by me since it’s not the purpose of my work.

How do you think most people perceive your work? And how would you like them to perceive it?

I think a lot of people perceive it as pretty loaded. They know I make work because I have a point to make. Some people really enjoy it for the technical side of the drawing, while others enjoy it for the subject. I’d like people to perceive my work in anyway they want to as long as it’s honest and it makes them think. I like feedback on my work when it is honest and well thought out, regardless of it being ‘negative’ or ‘positive’.

Who do you deem to be the audience of your work?

I get responses about my work from all walks of life, which is great!.So I think it may be a wide range of people. My work is really aimed at anybody who is willing to listen with an open mind. 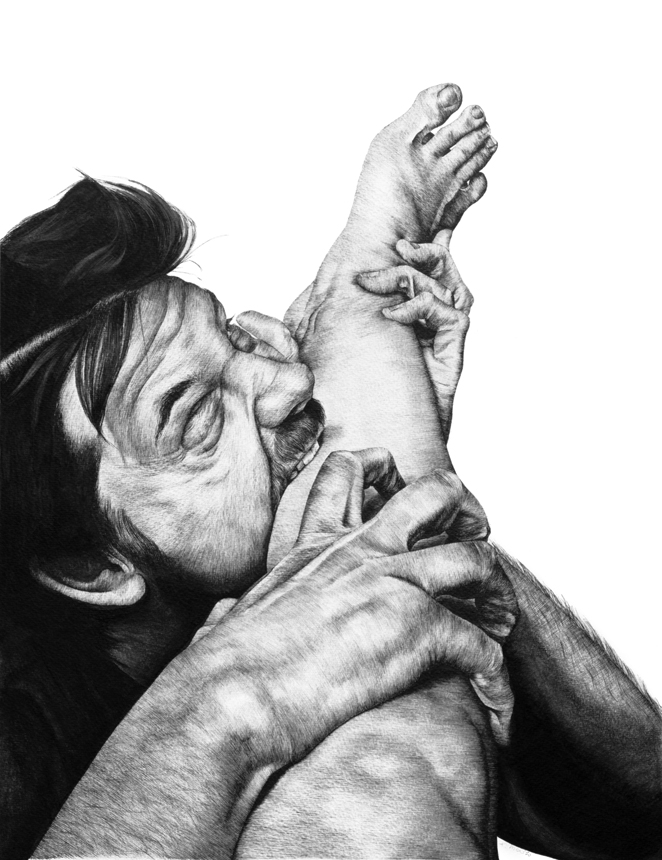 Where do you find the inspiration for your work?

I am constantly wondering what I should be drawing and exploring next, but inspiration often comes to me when I am trying to sleep, or when I am already drawing. I draw my ideas from things that have happened to me in the past as well as current events, so a lot of it is autobiographical. I am always taking photos and writing down ideas. Not all of my concepts make it, as I am really quite strict with what I release into the world. If I feel the subject or the drawing itself is weak it generally just gets hidden away in a folder somewhere.

How do you come up with the titles for your works and exhibitions?

Individual works don’t always get a title. They do if one comes to me, but if nothing seems to fit then they go untitled.

I’m doing a lot of group exhibitions at the moment so I usually don’t have to come up with titles for them. The one exhibition I did really think about was the one I had in Berlin, Germany last year: Mêlée. I got that title as it best suited my first (and lasting) impression of London. Coming from Melbourne I think I have lived a relatively comfortable and free lifestyle. London shocked me with how dirty, over crowded and aggressive it is. Now that I’ve experienced it I don’t know what I was expecting, but I do remember being shocked. I just felt that people were so unhappy there and I felt it was a bit of a mess. I think the name really suited the work I was making at the time.

Do you have a favourite piece of artwork that you have created?

I’m really proud of a lot of the work I have done. I tend to set myself little technical goals and I am happy when I feel I have achieved them. At the end of 2008 I did an oil portrait of myself in a bath, which was difficult for me on many levels. I am really happy with that one. The colours and the expression were really effective and it stands out to me as a great step forward in my work.

Do you have a favourite artist/artwork?

No, not one favourite. I have many that I like for all different reasons. At the moment I’d say the most relevant are Goya and William Hogarth as they are reflecting on the society that they are a part of. I really enjoy the dark humour in their works. I am especially drawn to Hogarth’s scenes of London and I think his works still rings true. 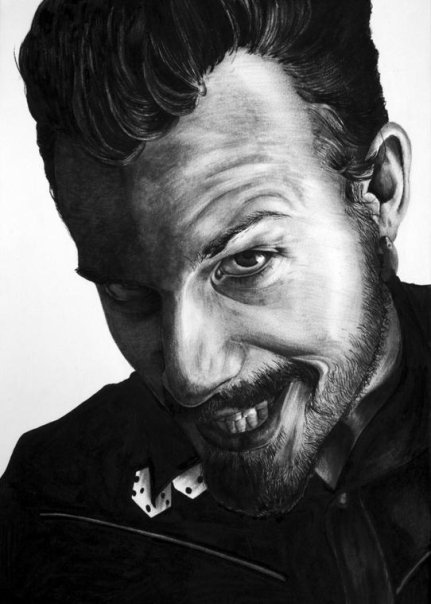 Have you collaborated with many artists? If so, which has been your favourite and why?

I haven’t collaborated with any artists to create works, however I have shown with a lot of different artists. I would like to collaborate with some artists. Namely Beau White and Nom Kinnear-King. At the moment though we all seem to be doing our own things and making very strong works. I think that the future holds some great opportunities though.

Did you experiment with any other mediums before settling on using felt tip pen on watercolour paper?

Drawing has always been a part of my life. I used to draw with whatever I could get my hands on. As I got older I began to experiment with charcoal and sometimes ballpoint pens. In my school and university art classes I saw that all the ‘serious’ artists all painted so I began painting in oils and acrylics. I found acrylics incredibly frustrating so now I stick to oils when painting. A few years ago I started drawing again and played around with all sorts of graphic pens and inks. As I developed my technique I have stuck with the fine liners. 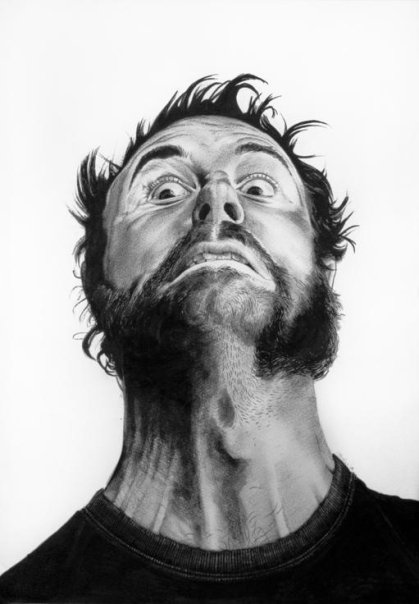 Why do you prefer using the medium that you do?

I found that drawing with fine liners gave me the same amount of line work as etching plates did. (I really enjoyed printmaking, but all the OHS at University really put me off.) Because of this I started drawing a lot with them. In terms of paper; watercolour paper can take a bit of a beating. Layers and layers of line work can destroy paper so I need some pretty heavy-duty stuff. I do want to get back into oil painting eventually, but this suits me best for where I am at the moment.

What did you do as part of the Young Ambassador Program for the National Gallery of Victoria?

Well I certainly learnt a whole lot! When I began the program I was twenty years old and a bit at odds with the world. I had just shown my first exhibition and really enjoyed the experience, but I knew I still somewhat naive. I had also just left a tafe course in art that I was struggling with. I was fortunate enough to be invited to join a program that the NGV was running a few days a week for young people, giving them the opportunity to learn more about the arts. We learnt about how the NGV and all it’s different departments operated. One particular event was an exhibition of twelve Australian artists at the NGVA. We got to interview and work with these artists, and then conduct tour groups through the exhibition, which resulted in workshops. It was so much fun. The program ran for a year and a half and it was sad when it finished, but by then I knew more about the art world and more about myself. As much as I enjoyed doing tours and workshops I decided that I wanted to become an artist in my own right and that’s when I got into the Victorian College of the Arts.

You were awarded the Lionel Gell Traveling Scholarship to travel to Berlin, why were you awarded this scholarship?

Lionel Gell is an incredibly generous man who also runs a few master workshops at the VCA. I participated in one of them and it was fantastic. The scholarship wasn’t specifically for Berlin, it was a scholarship to travel and I had to apply for it with a budget, travel plan, and explanation as to how it would benefit my practice as a professional artist. It was aimed at portraiture artists, which is I am, so I happened to be the lucky one to receive it! It really did help me in so many ways and I am very thankful for it.

What did you do in Berlin?

I went to Berlin as I had heard so many good things about it. I had always wanted to travel to Europe but I have always been pretty darn poor so I hadn’t previously travelled. I think travel is essential to an artist’s practice. As a result of many conversations I chose Berlin. I knew it had an art scene that was exciting so I got a visa to live and work in there for a year. The problem is that there is no work and my German is pretty poor! I met up with many artists; Leo Plaw in particular gave me a lot of advice on art, painting, and Berlin. I had a solo show there which was a very enriching experience, I got to travel a bit around Germany, Poland and Paris and it was an amazing and life changing experience.

Is the Berlin art scene drastically different to that of Australia?

I don’t think it is drastically different to the art scene in Australia. Especially in terms of Sydney and Melbourne, you could see a lot of similarities in style, and indeed in quality. I think Australia has a very rich art scene, I just don’t think Australia has been capable of giving the art scene and the artists the credit that they are due, so they loose them to other countries. Australia’s biggest problem is its lack of pride in its arts and the fact that it is so far away from the rest of the world!

What would you like to achieve career wise? Do you want to own your own gallery someday or hope to exhibit your work in as many places as possible?

I’d love to own and run a gallery. I think I have a lot of knowledge that would help me to do it. However I am not sure that that is where I want to put all of my money and effort. There are a lot of great galleries out there doing what I would do anyway. I enjoy exhibiting, but to have as many exhibitions as possible isn’t my main objective. Ideally I want to push my work further. I want to make people think about it and I want to talk to more and more people about art and ideas. I have a lot of ideas that I want to peruse but I can’t execute them until I have my own studio space and more time!

Describe your work in one word.

Cathartic. I tend to base my work on what’s on my mind at the time and I find that it is the most effective way to express myself. I don’t see my work as making specific statements, but rater raising questions and ideas.