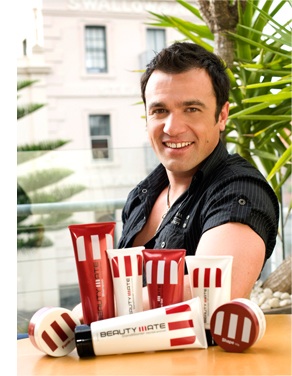 He’s encountered chart-topping success, been nominated for ARIA Awards, featured in the War of the Worlds musical and has completed a string of successful concerts. Now this multi-platinum selling rock star is ready to take on a new challenge as the ambassador of Australian men’s grooming range Beauty Mate.

Shannon Noll is a well known name across Australian homes. As the runner up contestant in the first Australian Idol series, he stole our hearts with his heart-felt ballads and rusty country tunes. Since his arrival on our screens in 2003, he’s smashed many of his personal and musical goals out of the park – all while staying incredibly grounded and down to earth.

As a true blue Aussie bloke from outback Condobolin in central western New South Wales, it made perfect sense to position Shannon Noll as the ambassador of Beauty Mate. He was approached by the brand to get involved because they believed Shannon was suitable for what the range represents: simple, no fuss men’s products. “They wanted someone that wasn’t too highbrow but also man-ish,” explained Shannon.

Apart from the fact that Shannon is an Aussie face for an Aussie brand, he thinks he also makes a good representative for the range because it suits his busy lifestyle. “I’m a bit no fuss myself and it fits me well because I’m on the road a lot touring,” he said.

Shannon admits that while he has always taken pride in his appearance, his sense of grooming has come from the strong influence of his father. “I get a little bit of self pride from Dad I think. He was always big on putting on some aftershave when he’d get ready to go out,” he said.

The team behind Beauty Mate have recently secured a deal to range their products across selected Target stores and are working to expand the accessibility of their brand. In an industry that has previously been dominated by women, Shannon believes it is important to offer a range of grooming products to men. “I think over the last five or six years men have become more conscious of their looks,” he said. But Shannon can’t stress how important it is to keep in mind the simplicity of a men’s care range. “We don’t want to be spending more time in the bathroom getting ready than our girlfriends!” he said.

While Shannon doesn’t have an extensive grooming regime, he does believe in the benefits of moisturising and using a product that offers UV protection. After spending years out on the farm in the sun, Shannon admits that he would have liked a simple skin care range like Beauty Mate. “Things like the SPF content in the moisteriser is an important point, especially if you’re outdoors a lot,” he said.

Shannon has been busy touring overseas with the War of the Worlds musical team and has returned from a 13 show sell-out stint across Europe. Combining the show with his music, he has been on the road since September last year and is currently finishing off a small national tour across the eastern coast of Australia. He’ll also be playing with the Screaming Jets and making appearances at a few corporate events before returning home.

After the touring is done, Shannon plans to start working on a new album. Although, he’s not too sure what to predict for his next round of songs but assures us that the process will be experimental with a strong focus on acoustic sounds. “I find it hard to pinpoint a specific style because when I write music, it evolves. So we’ll see what comes up,” he said.

After all this travelling, Shannon admits that he is looking forward to going home and spending time with his family. “I can’t wait to get home every time I’m away,” he said.

There are many things that this true gem of a bloke from outback Australia loves about his country. And after endless travel across small and crowded Europe, he always enjoys coming home to an abundance of space. “I love the diversity in the landscape. You can go from snow cut mountains to desert plains in a one hour flight,” he said. And for Shannon, this is why Australia will always be called home.

Great post Sharon…. you lucky ducky got to interview him 🙂 !

Gee you are so lucky to have met this great Aussie Bloke- I am so jealous- I think he is great. What an amazing article Sharon- Well Done once again! I have passed this on to my work colleagues because I know they will also enjoy this article.

By Gaynor Alder For a social occasion such as the races, a professional spray tan is definitely the way forward. Even...
© Onya Magazine 2009 - 2021
Back to top