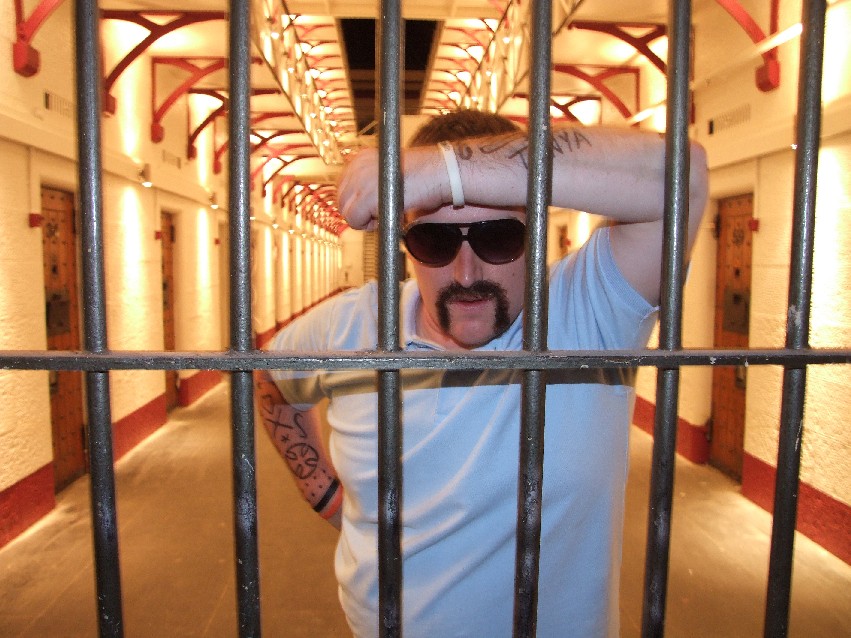 Heath Franklin isn’t one for the rough and tumble life of a foul-mouthed ex-crim – even though his alter ego, Chopper, is.

Chopper is the focus of his comedy act, Make Deadshits History, which was recently filmed at the infamous Pentridge Prison for a DVD version. He also took the same show to the Edinburgh Fringe Festival and New Zealand to critical acclaim. At present, he is one of Australia’s most successful comedy performers, selling over 110,000 tickets to his shows globally and touted as, “Australia’s funniest comedy character,” by the UK Sunday Mail.

Heath found his comedic legs in the 3rd Degree comedy troupe, formed during his days at the University of Sydney. Progressing from there, he and the rest of the 3rd Degree gang performed live sketch comedy, making rapid-fire costume changes while, “Crammed in a little room, running around with paper mache horses and props,” until making a smooth transition to television on Channel 10’s Ronnie Johns Half Hour.

Ending up a cult favorite, his role garnered him the Inaugural Graham Kennedy Logie Award for best Outstanding Talent in 2006. As for the Chopper character, he drew his inspiration not from the man and his salacious deeds but from the notorious, larger-than-life character in the feature film bearing Read’s nickname.

“It was largely due to Eric Bana,” he enlightens me on the evolution of his own Chopper character, speaking with reverence.

“His portrayal of Chopper in the film was just so great. He was one of those really interesting, three-dimensional characters that have a lot going on. It was predictably unpredictable. It was very Australian in a way. In a sense it hadn’t been done [up until then]. I never really had a grand plan to do it, to tell you the truth.”

“The character just keeps getting bigger and more three-dimensional the more I do it.”

Chopper Read, and the quintessentially Australian fascination with outlaws, would seemingly feel out of place in a foreign country, taking his show Make Deadshits History abroad with little modification.

“I didn’t really have to change much,” Heath explains. “Especially in Britain, as there’s such a huge Aussie ex-pat population there – there’s usually someone in the office or wherever that’s seen Chopper, the movie, and has passed that on to their mates. Some of the terms that I use are very Australian but I think they translate pretty faithfully. I guess I was trying to promote our colorful language overseas,” he laughs.

Despite finding success overseas, Heath still calls Australia home and loves the comedy culture that we have cultivated over so many years. Although perceptions abound that Melbourne’s comedy scene is much livelier than his native Sydney, Heath assures us that isn’t the case.

“I’d say that the Melbourne International Comedy Festival is pretty sizeable, but Sydney is pretty happening as well. We had the World’s Funniest Island festival a couple of weeks ago, and there’s still a lot of live stand-up that goes on around the place.

“The only difference I see is in the type of audience; in Melbourne people go out of their way to look for comics from word of mouth or from a flyer or a review – Sydney people usually just go into a pub and say ‘yeah, let’s go see some comedy’ or something like that.”

For an Australian comic that was all but plucked out of obscurity, he says that hard work and, “Being in the right place and knowing the right people,” helped launch his career into what it’s become today, although he stresses it’s not a particularly difficult career to pursue, if you have the right talent.

“I don’t think it’s particularly hard to get into stand-up,” Heath confesses. “I mean there are a lot of people that have been doing it for a long time and perhaps they, well, shouldn’t?”

“That said, I think it’s hard to get to the sort of level say a Wil Anderson or Dave Hughes are at. But you just have to keep plugging away and be in the right place at the right time. A few key things just sort of fell into place and the fact I worked hard in the early days really helped me. In a lot of ways, I was just lucky.”

It seems like the appeal of Heath Franklin’s Chopper has no bounds – but what makes him so fascinating and hysterical?

“I don’t know,” Heath ponders. “I never worried whether people liked Chopper or not, I just kept doing what I do. As people have asked me why he’s so popular I’ve tried to develop theories. I think part of it is that it’s a very Australian character – but it’s not that same Australian character that’s been done to death – the stereotypical bogan who wears a mullet and footy shorts. I think, and you might find this odd, the fact that he swears a lot is part of it.”

“I used to work on construction sites and watch people at the pub, and their swearing is almost like a part of them – I didn’t write in all the swearing to be funny, but because I think there’s something honest about the swearing, because Australians share that experience of swearing or being sworn at. It just operates on that same kind of level.”

Anode Season of Art in Sydney

Anode Season of Art in Sydney

By Lin Tan What started off as a four-day pilot art show has now blossomed into a season of art, otherwise known as Anode....
© Onya Magazine 2009 - 2020
Back to top