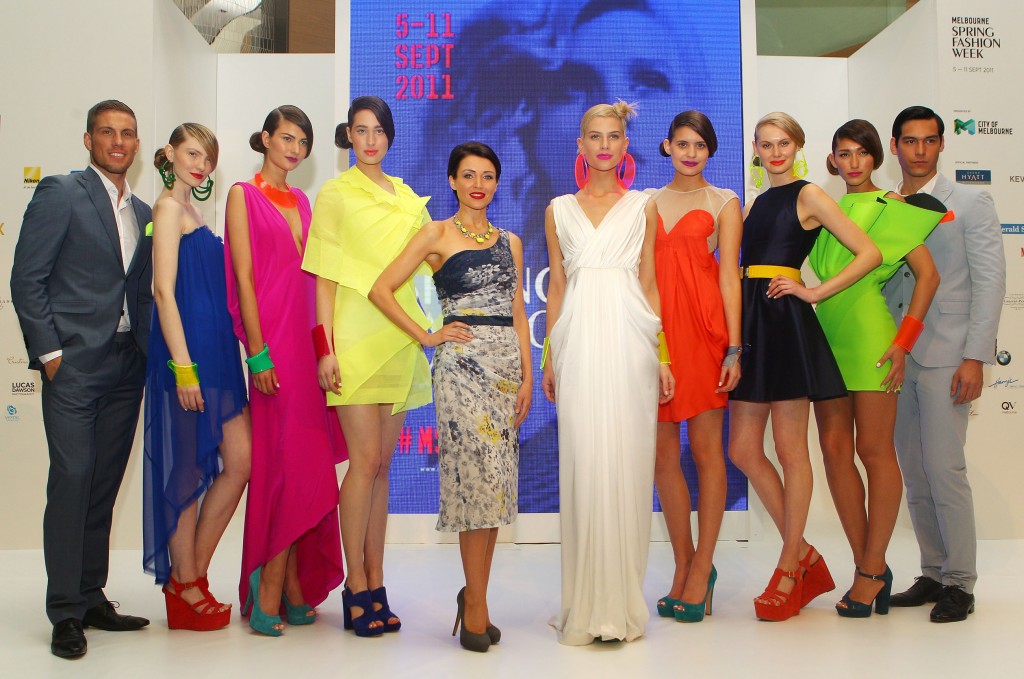 Melbourne Spring Fashion Week launched in the traditionally fashionable way; with models wearing the latest and greatest looks of the coming season, posing with the Lord Mayor of Melbourne and the face and ambassador of the festival.

In 2011, MSFW released two ‘preview teaser’ clips, asking viewers to guess whom they thought the face of the 2011 event would be. When all was unveiled Sophie Van Den Akker, formerly of Australia’s Next Top Model fame, was named the face of the festival, with her likeness appearing on the brochure, collateral and soon, all around the CBD.

When the announcement about who the ambassador for 2011 would be, a round of applause greeted Dannii Minogue, the Melbourne girl through and through and a fashion entity in her own right.

Sophie and Dannii will fly the flag for the festival in 2011, one of the key Melbourne City Council events for the year. Lord Mayor Robert Doyle is a strong supporter of MSFW, and talked about how the event showcases the best in local talent with 80% of the designers being Melbourne locals. In addition, for every $1 of council investment, MSFW claims $4 is injected into the local economy. Bravo fashion.

But the week, though for me it is all about the parades, isn’t just about the 20 or so minutes of excitement on the catwalk each night. In addition to the designer series, MSFW will bring plenty of free events to the people of Melbourne including workshops, exhibitions, parties, markets and films.

The entire city will come alive with Look.Stop.Shop, a self-guided city tour of experimental retail installations, window displays and in store fitouts.

City Square will again bring lunchtime parades to city workers, brightening otherwise dull office days with themes for the girls and the boys.

The business series – an important part of all Victorian fashion weeks – will this year cover effective communications for your business using old and new media, best business practice for a viable and competitive future and the importance of creativity in today’s fashion industry. Of course, all these topics focus on retail and fashion, a highly relevant topic in today’s economic climate.

The Designer Series, run twice every night and showcasing our best and brightest, will be the standout event of the week. All the designs displayed on the runways are available to buy in stores the next day, giving the people of Melbourne the unique opportunity to be as fashionable as the models and showing MSFW to be one of the most progressive fashion weeks in the world.

Melbourne Spring Fashion Week runs Monday September 5th to Sunday September 11th and tickets are on sale now. Celebrating its 17th year, MSFW hopes to reach 100,000 people over the week; 20,000 more than last year. With over 150 exciting events on the schedule, we don’t think that will be a hard thing to achieve at all.

To browse the program or book tickets, simply visit the MSFW website.

When Bernard Tomic steps onto a tennis court, he looks awkward. Far from the intimidating hop-skip of the energetic Rafael...
© Onya Magazine 2009 - 2021
Back to top