The final night of the designer runway at Melbourne Spring Fashion Week took place on a Friday night, the perfect day of the week for unique Australian designers to show their latest collections before heading out into the typical Melbourne weather to discover a downpour, leaving 800 drowned looking fashionistas wet, wet and wet.

Ruby Rose was front and centre for last nights parade, dressed in a black dress with feathered skirt and shoulder feature, designed by an RMIT student. Touted as a ‘Very Melbourne’ collection of designers, we took our seats for the last designer parade of the week. 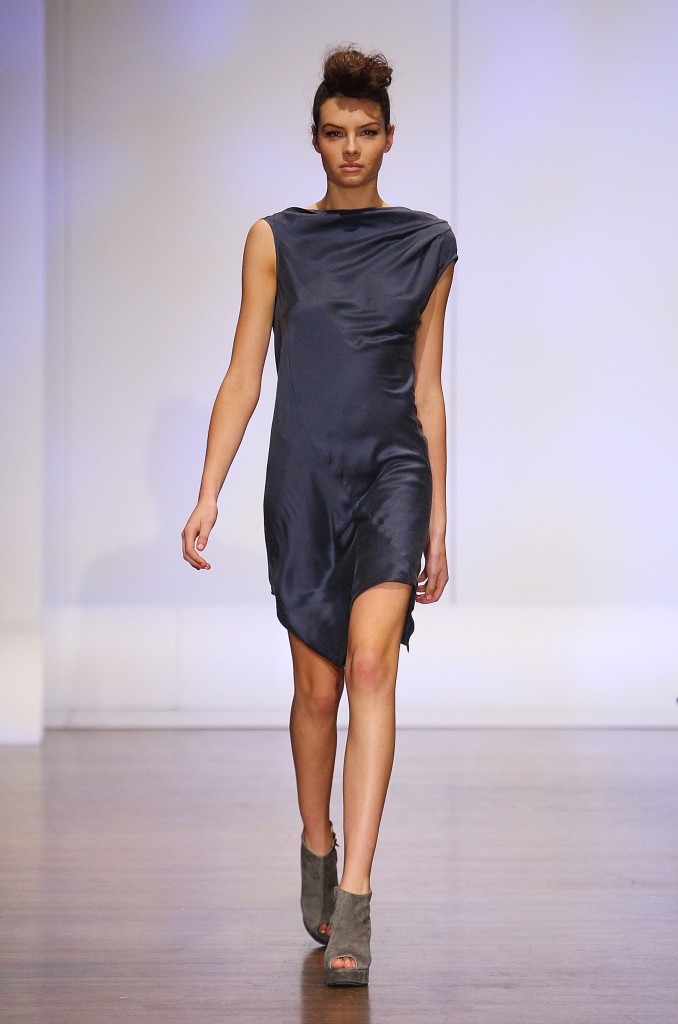 Alpha60 opened proceedings with a short clip of a Roman bust, which when the camera zoomed in, revealed the bust crying lilac tears. These tears then dropped to form flowers, then a garden, before the music pumped up a notch and the models entered the runway. Silks and fabrics with drape were used in navy and print tee shirts, utilising the image of the bust. A wave/chain print in tones of blue was used throughout the collection, finishing with Lucy McIntosh in a three quarter length dress in the same fabric.

The colours seen on previous nights were again used by Above, creams, burnt oranges and navy popular colours. A blazer and short set in cream with cut outs reminded me of making snowflakes out of paper as a child and the use of tying, drape, angles and bias cut made for an interesting collection.

Local favourite Limedrop, who just last week won the Chambord Shine Awards prize, opened with simple basics, a white shirt and black skirt. As noticed over previous nights, white pants for men are big this season, as was checked shirts. A shirt dress with a longer back has been seen several times on the runway, and closed the collection with Lucy McIntosh in a pale double denim look ensemble or shorts and long back shirt with cuffed short sleeves.

Telsa opened with a dress very similar to the Wayne Cooper collection of the previous evening, black with a large ruffle along the bias cut neckline. Simple separates were great, a black dress with skinny straps, a bow and cut out to the back and full skirt was cute and the accessories by Alexandra Blak and Estelle Deve stole the show. 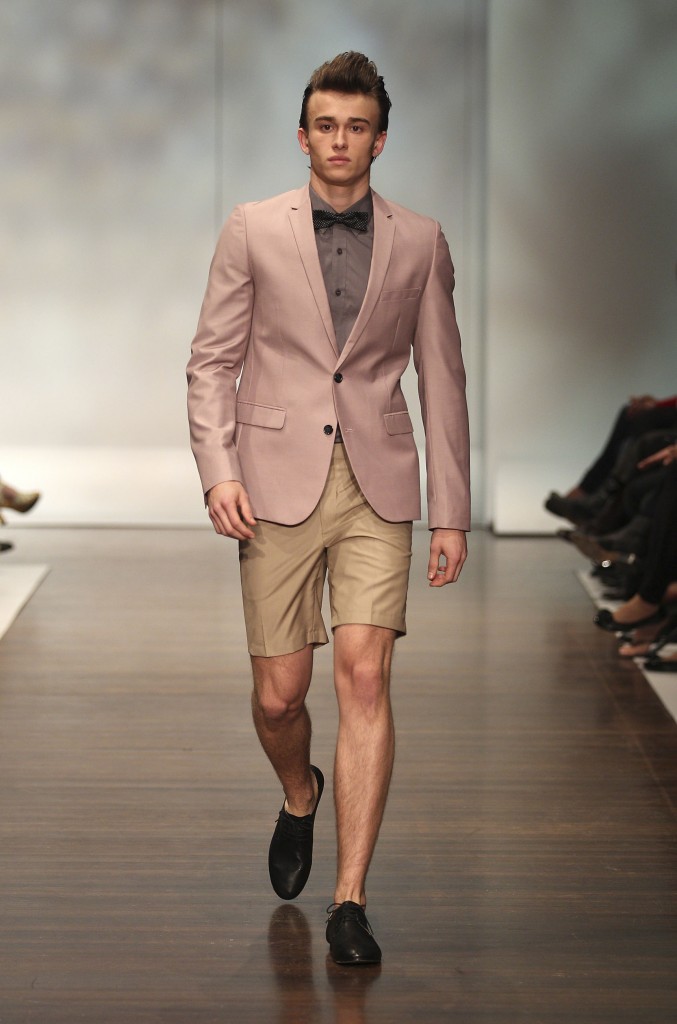 Menswear label Jack London’s palette of plum, berry, navy and purple had a distinctly winter feel but the blazers would look great with jeans and tee shirts while white pants made another appearance. The distinctly 50s styling and hair was a perfect match for the suit infused with glitter that closed the show.

A second film clip welcomed FAT to the runway, but could easily have been mistaken for a car commercial. Cropped skinny jeans and a bodysuit that resembled gymwear was followed by a trench coat shirt dress, belted tightly. Bone and blue denim look created casual looks while for the boys, the check shirt made another appearance with a military inspired jacket. 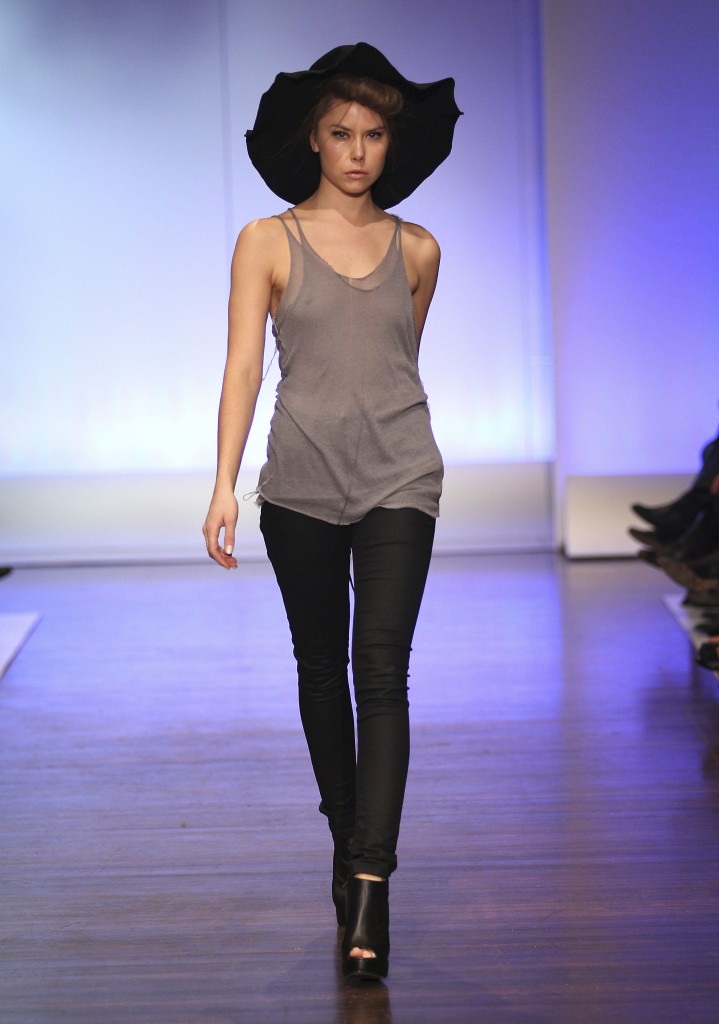 Claude Maus Denim was an eclectic mix of mens and womenswear, all very androgynous. Sheer knitwear with torn edges, hems and loose threads were teamed with black skinny jeans, all in shades of black, stone and bone. Only a particularly confident personality could pull off these looks.

Fringing reigned supreme at Trimapee, with lots of drape and plenty of stereotypical Melbourne black. Layering, intricate braid type work and more androgyny made for a collection suitable for men and women, including a tux jacket worn by both sexes. 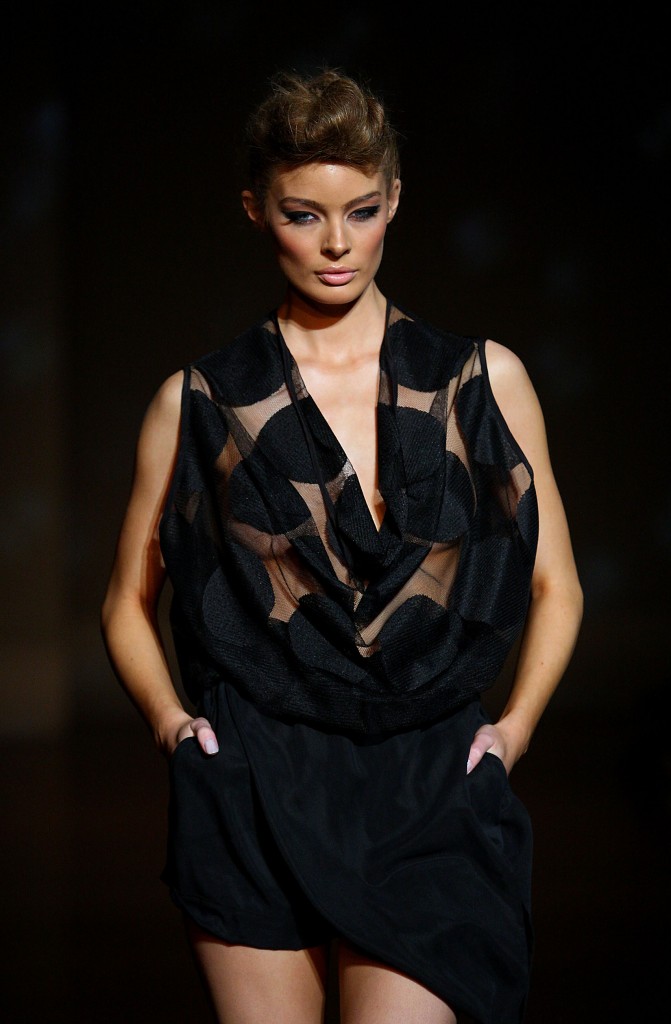 A final video, shot in black and white, of a girl with the sun behind her and polka dot fabric led into final designer Carly Hunter. Lucy McIntosh walked for the final time in a sheer draped black oversized polka dot top and shorts, followed by several pieces in the polka dot story. Sheer browns and taupes, moving into blues made for a pleasant spring collection.

After four nights of parades, it is easy to spot some consistent themes for the coming months but also has provided us with an insight into the personality and inspiration behind the collections. The typical Melbourne designs on display this evening – and their prominent use of black –  is evidence of a city that knows what it likes and isn’t afraid to show it.

The Age of Fashion Exhibition

Wow Lucy’s not smiling as much in this one, maybe she has sore cheeks…you should see the picture I caught of her grinning….

As part of the official Melbourne Spring Fashion Week calendar, the Queen Victoria Women’s Centre held an eco-fashion...
© Onya Magazine 2009 - 2021
Back to top