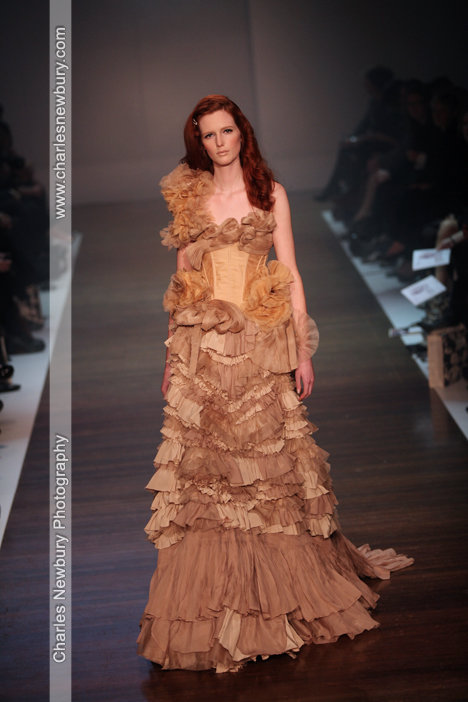 Designer Series Two at Melbourne Spring Fashion Week was touted at the hottest ticket of the week and the sold out show did not disappoint. On the first day of spring, the rain held off for the evening parade as fashionistas from all walks of life crowded into the Town Hall for a spectacularly beautiful show.

The show started with a Shakespearean film clip – I think Hamlet is the one with the skull – and led into the opening designer, Aurelio Costarella with a medieval gown in a toffee tone. The opulent gown was strapless, corseted and featured a gorgeous full length full skirt, ruffles of all types circling it. If this was to be an indication of the show to come, we were in for treat. 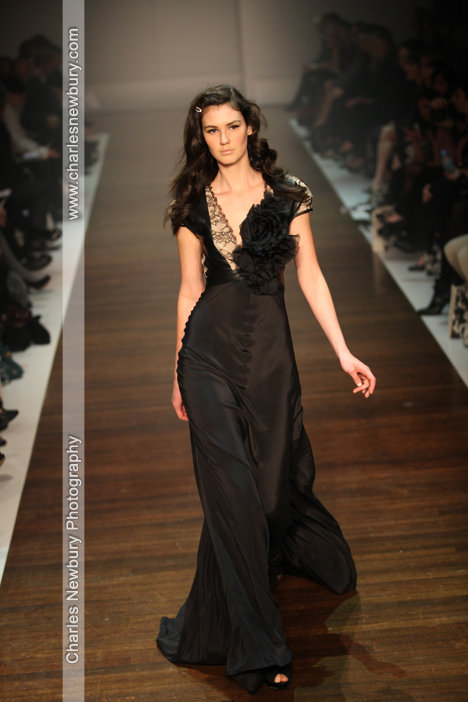 Costarella went on to show an entirely black collection, disappointing for those of us who like a bit of colour in our summer wardrobe. His creations were beautiful, undisputed, but the ruffles and embellishments would have been equally as amazing with a touch of another hue. 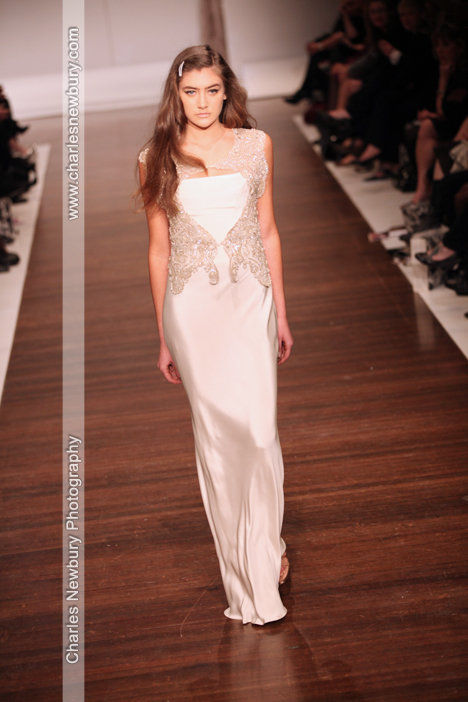 Gwendolynne graced the catwalk next and in direct contrast to Costarella’s black, models wore nudes and golds, all pale shades much more suited to spring. Lucy McIntosh was featured in the parade, walking with two other models through some complicated choreography. 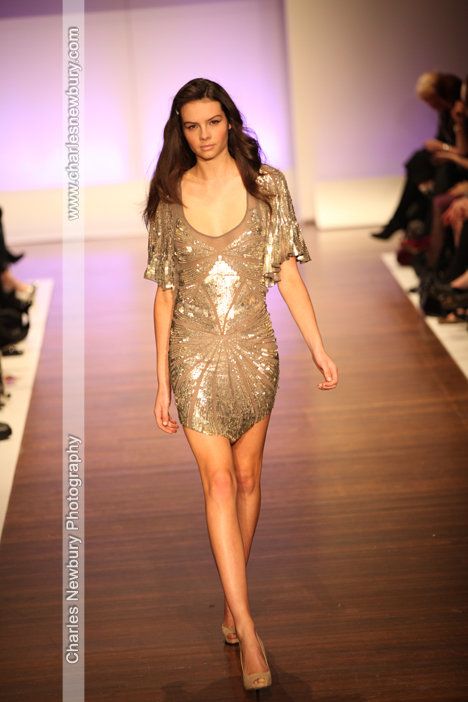 Disco ball lighting filled the room for Thurley where silver sequins made up a mini dress, which I commented to the person next to me would catch on everything. Nudes were popular as were graphic prints and gradients, seen at Designer Parade 1. Two orange dresses were a favourite, one with spectacular draping. 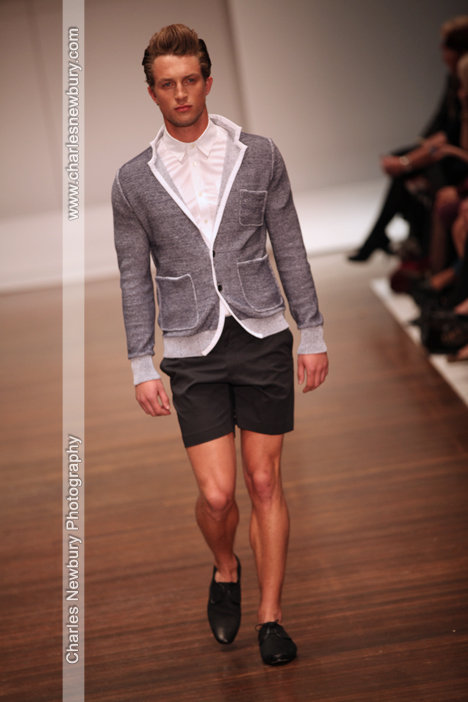 Racewear favourite Arthur Galan AG bought the boys out for the first time this week at the Designer Series, in sharp suiting and a cardigan that was nothing like your grandpa would wear. His womenswear took on a Chanel like essence, tweed jackets in cream, while a leather dress is unlike his previous work. Many of the dresses would be more than suitable for the races, especially a black and white striped frock, the perfect little number for Derby Day. 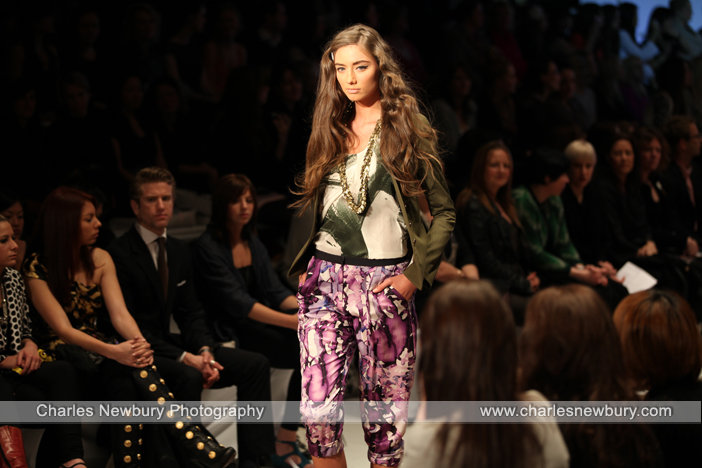 Lisa Ho focussed on lilac, another colour that appears to be strong this season. With gorgeous accessories and clashing prints, Ho put Lucy McIntosh in a Burberry Porsum inspired dress (think Emma Watsons campaign from last season), also in lilac, which was a perfect match for her fun and flirty personality – her trademark shrug when posing made all the more appropriate. 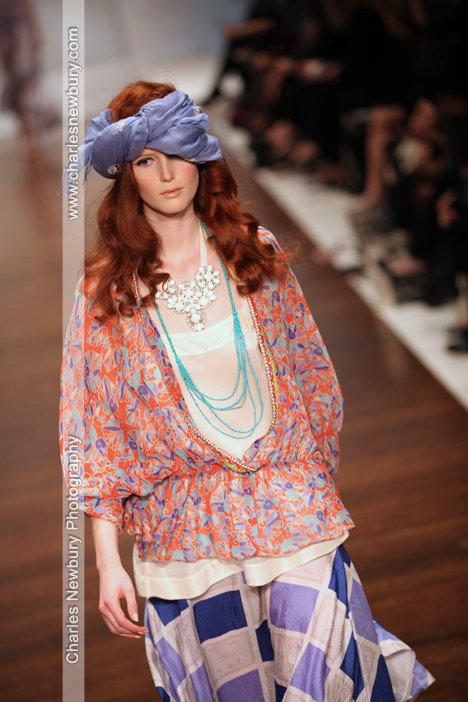 The collection presented by Megan Park was 60s inspired and very folksy, and while the pieces might be ok as separates, the overall effect of the parade made for an interesting viewing. A gorgeous Jackie O inspired shift dress in black and orange with contrasting pockets was one of my favourites of the night, together with a navy buttoned shift featuring a white print.  The combination of orange, blues, pink and browns also worked well. 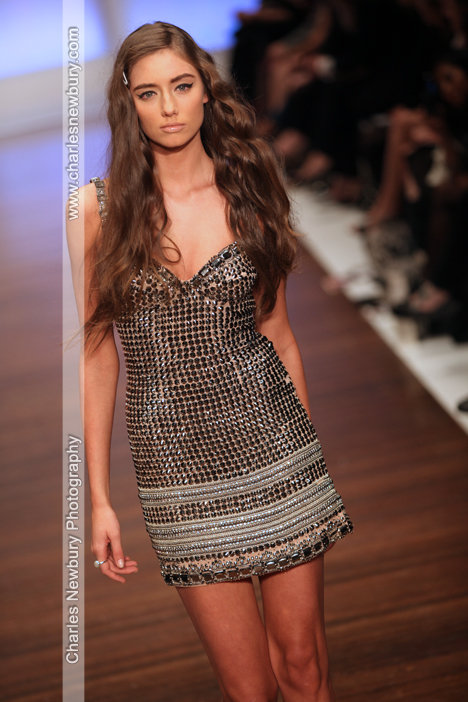 International favourite Collette Dinnigan showed why she is one of the best with dresses fit for a princess. Strapless, boned, diamantes and beading were all part of the collection, including an entire dress made of the silver stuff. And I thought the Thurley dress would catch – this one was truly a ‘standing only’ frock. 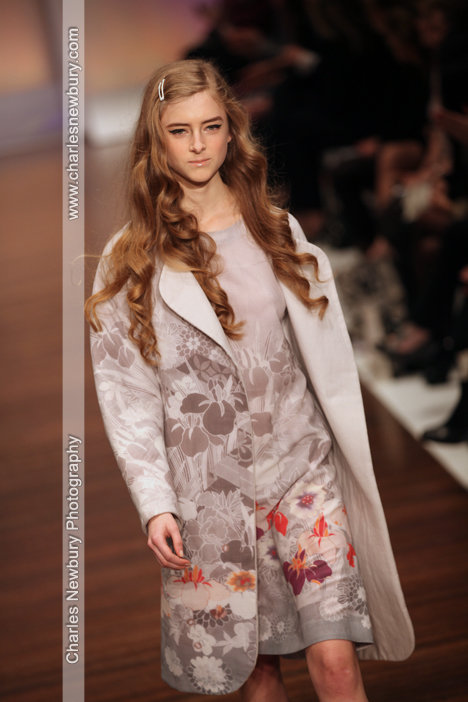 Akira opened with white dresses, suitable as bridal gowns. Floor length, embroidered, beaded, infused with lace and with sheer fabrics thrown over them, the collection would make any bride to be swoon. His collection then went to the 70s and featured a lot of velvet and chunky wedges with orange print. A printed dress and matching housecoat were particularly special though. 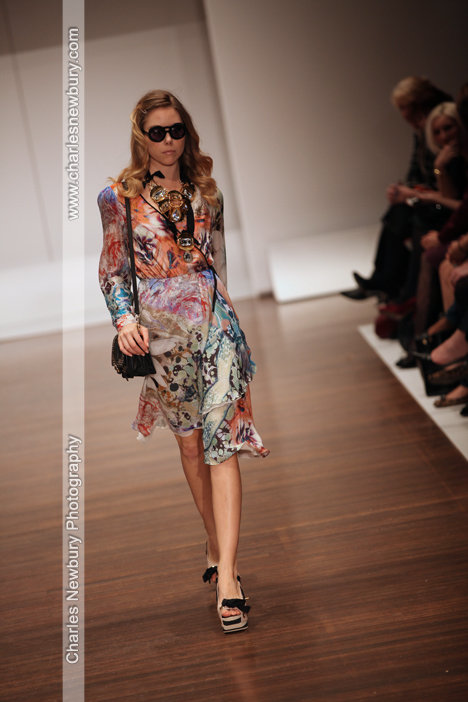 Final designer Christine, a newcomer to MSFW, opened with ‘nana’ dressing – pink floral print pants and an oversized shirt with rolled up cuffs. This was no indication as to what was to come when pretty sun dresses floated down the runway before she also took a 70s feel on with peasant style dresses and tops, paisley prints and hippy vibed pants. The oversized accessories were a highlight.

At the conclusion of the show, all I wanted to do was meet a prince in a bar so that I might have an occasion to wear some of the beautiful dresses to, however, along with the fine, expensive frocks, there were also a number of pieces that worked as separates which would easily integrate into everyone’s wardrobe. And if not? Buy something in lilac and you will be set for the season.

Beauty and the Beach

Another day, another instalment of the Lunchtime Series at City Square. This time, it was all about the ladies for the aptly...
© Onya Magazine 2009 - 2020
Back to top