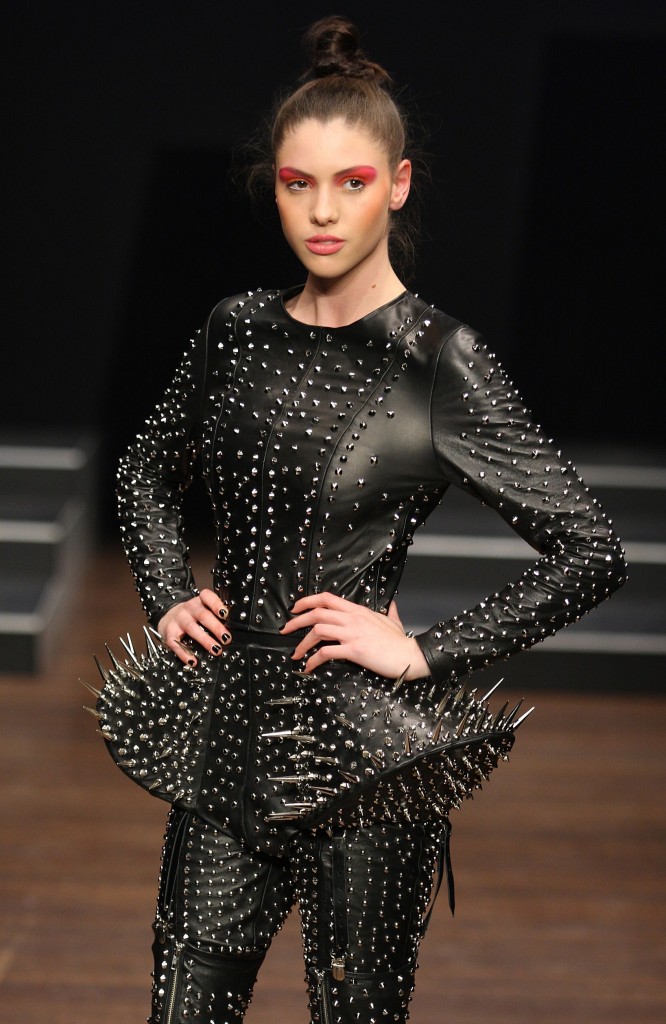 As a current student at RMIT, I often see work by students more advanced in their courses than I as I walk through the hallowed halls of the Brunswick campus, but nothing prepared me for the spectacular displays on show at Melbourne Spring Fashion Week this past Saturday at the Melbourne Town Hall. TwentyEight09 was a display by a group of talented individuals of their unique workmanship – the future of the fashion and design industry in Melbourne.

Starting fashionably late, each designer was to showcase four outfits highlighting their work and finalising their four years of study. The first designs by Jessica Jones took on an Emo feel, a leather jacket with suede, a vest with fringing and a dress featuring 80s cut outs. Romayne Scott reminded me a bit of being on a deserted island – torn fabrics, leather pants and flowing dresses all using a mixture of fabrics that took on a tacked together feel. It was clear from the start that the students had elected to experiment with fabrics and the mix of textures gave a distinctive feel to the designs.

Rosalind Gunawan played with wool; knits that resembled futuristic tubing and matching shoes while Charani Wijerathna designed childrenswear with lots of bright colours and the element of fun. Her quirky Wayne Cooper-esque bucket skirt served the double purpose of housing soft toys and dolls – perhaps Mr Cooper was going for the same thing at the Designer Series on Thursday evening?

Jessica Knell used Hessian; Laura Emerentia made sleepwear from quilting. Duane Villegas went with athletic gear while Phoebe Morgan showed some of the more wearable outfits of the evening; cute playsuits and gorgeous summer dresses in pastels. There were bathers and lingerie with 60s styling by Lida Farinaccio and some interesting ways with denim at Alessandra Dean. With a name like that, what else could you be but a fashion designer? 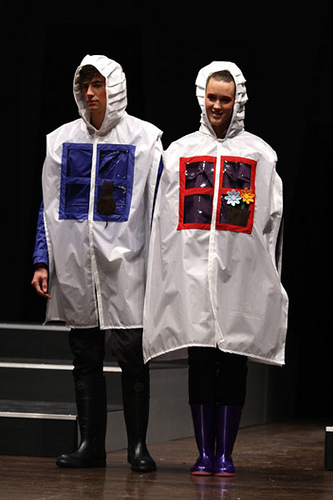 Levin Sun and Houda Mcheileh were traditional with metallic dresses but my favourite display of the evening was by Jacqueline Wong. She used a model family – male, female and a child of each sex, dressed in raincoats that featured playschool style cut out windows in the front. As the smiling family walked the runway to ‘Singing in the Rain’, the raincoats were then removed and the Wellington clad folks showed off jackets, capes and wet weather gear. It was very Melbourne with a splash of colour, and entirely wearable.

As Show 1 closed it was apparent that the students were not only out to impress, but also to shock. They were showing the fashion folk of Melbourne that it’s not all about what’s hot right now, but about what might be the trend in 12 months. It was an exercise in experimentation – with fabrics, cuts, styles and design. Even architecture rated a mention, with outfits defying gravity and fabrics stepping up to the challenges set by these imaginative students. Their work is not so much fashion design as an art form – something that you might consider going to look at in a museum or see in a coffee table book years from now.

Show 1 put a lot of pressure on Show 2 to deliver equal or better to the crowd of expectant friends, family and fashion folk. First out on the runway – a bee-keeper type veil, a leather dress and more fringing. Marie Tang got the evening going with a bang. Natalie Bortolotto kept the momentum up with pompoms in every colour of the rainbow – as a vest and on shoes, a very hippie 60s vibe. Katinka Poole and Zoe Sandow went from wide shoulders and structured shorts to Star Trek style stiffness on skirts and dresses. Bondage made its way onto the runway next – a feast of S&M from Nadia Napreychikov with leather lace up bodysuits, buckled pants, a metal studded bodysuit and a lace bodysuit to add to the edginess.

As the show ventured further into the realms of quirky and unreal, some Pride and Prejudice tradition shined though by Minhee Jo, followed by Kylie Minogue styled white hooded jackets and dresses at Amy Falentine. Christiana Livaditis showed real talent and an eye for her craft – her outfits slowed the runway right down with a full length blue lace skintight dress, a gold and black Marie Antoniette era dress with high collar and wide hips and a gothic style mourning dress with an even higher neckline. She proved very popular with the crowd and the photographers alike but only popped her head onto the catwalk for a moment before retreating to the safety of backstage.

Yoan Limah designed some cool corporate pinstriped looks and the models graced the catwalk in one shoe each. Laura De Vries used polka dots and Albert Lee forgot to include arms in his jackets. Hannibal Lector influenced the designs of Cami James – black tape covered models mouths while leather pants and body moulds strutted the catwalk to heavy metal music. 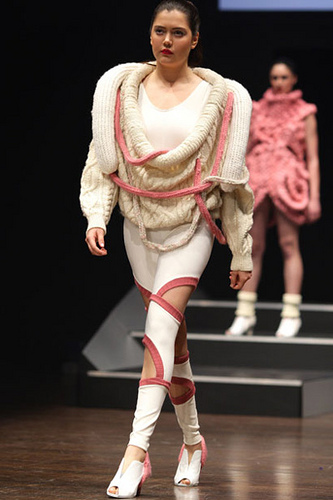 As the show continued and the end was near, the final designers continued to show why they are the best of their bunch at RMIT 2009. Kitty Garry used structure and definition to design architectural tubing that reminded me of housing insulation while Georgia Lazzaro rounded out the night with an innovative dress that was floor length on the left, and a pair of bathers on the right.

The cheers for the RMIT show were the loudest I had heard of the week – even if the audience couldn’t wear 90% of what they had seen on the runway. For me, the RMIT show reminded me that fashion isn’t all about what new dress you are going to wear to that party on Sunday, or what shoes will best match it, but that from the very beginning – fashion is really an extension of art. The RMIT students are creative, driven and passionate about their craft, and the talent shown in these collections is evidence of that. The intricate detailing, commanding styles and attention drawing designs are an expression of the designers’ personality and creativity – the very heart of what art really is all about. 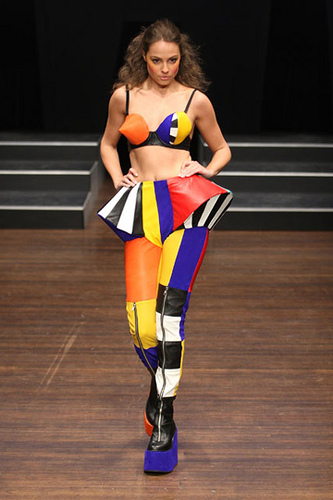 That Time of the Month

A wonderful write up Sarah! : )

That Time of the Month