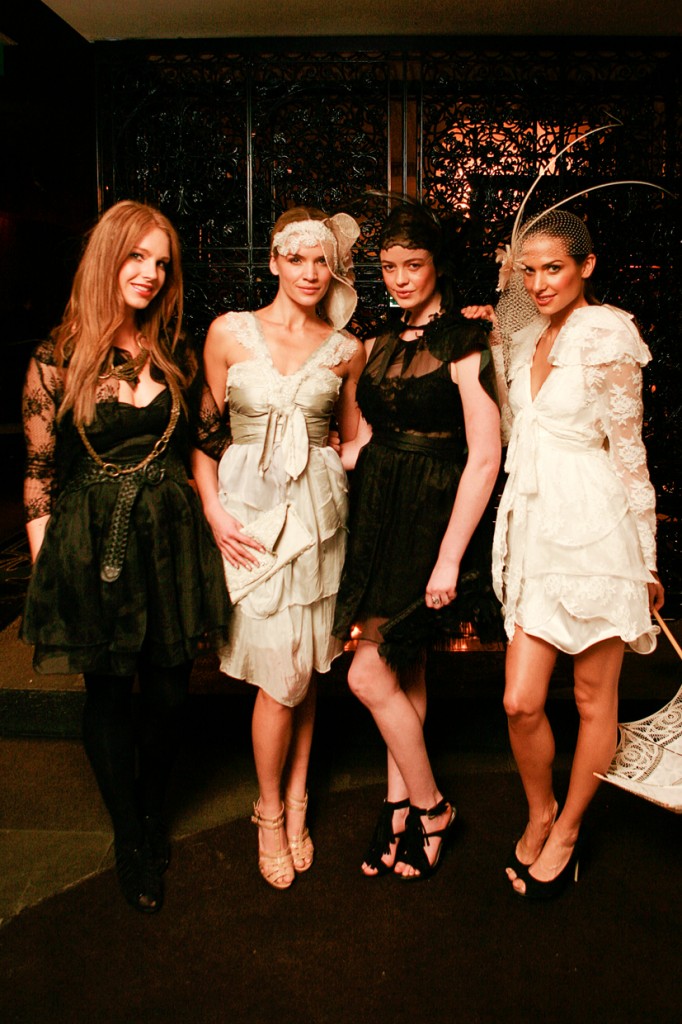 Last night’s Chambord® Shine Awards bought out Melbourne’s most devoted fashionistas as The Longroom heated up with the excitement of seeing fabulous up and coming designers vie for a finalists spot at the national awards night to be held in September.

The Chambord® Shine Awards, bigger and better than ever in 2010, allows our hottest young designers a chance to showcase their style at the runway evenings in Brisbane, Melbourne and Sydney. The stakes are high, with prizes including presenting their designs to 2,000 consumers at the Strand Arcade’s ‘An Evening With Our Designers’, having their design worn by a fashion forward celebrity during Melbourne’s Spring Racing Carnival, and being able to produce and show their own collection at Australia’s largest consumer fashion festival in 2011.

The Chambord was flowing, music pumping and the crowd energetic as MC Gracie Otto took to the stage to start the evenings’ proceedings. Melbourne judges Kate Vandermeer (ispystyle.com), Emily Power (Herald Sun) Kate Mansour (Chambord) and Joe Farage (Farage Style) were seated front and centre for the parade and as the lighting changed, the subtle movement of the crowd leaning forward in their seats that tiny bit was evidence of the anticipation in the room.

The eight designers in the Melbourne parade were to show three key looks each and with judging criteria including points like, ‘something shiny’, anything was possible.

First down the runway was Anna Campbell and it was love at first sight. A dreamy white lace and ruffle creation, v neck, long lace sleeves and an amazing headpiece and matching umbrella. Anna moved onto a grey silk dress with raw edges, layers and detailed bodice, completing her muted colour palette in a black frock with a nod to the 20s and a darling little capelet.

Stacey Christie opened with a daring orange sheath dress with sweetheart neckline, completed with the recommended sparkle. A flirty black cocktail dress was next, again using the trim at the bust to add shine and create a feature. Her final dress, a floor length corseted strapless gown in slate wowed by combining the formality of the corset in a mini dress of sorts and a flowing skirt to the floor. 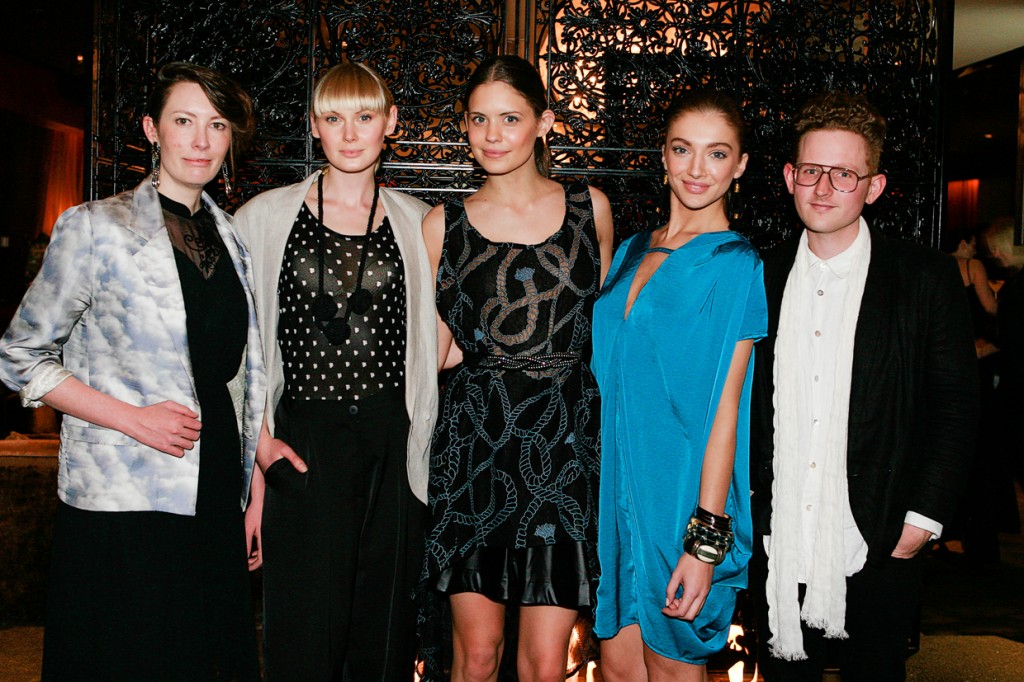 Popular with the crowd, Michelle Czech’s designs were innovative, fun and different. Honeycomb cut outs of a felt style fabric gave designs volume and shape, greys, blues and lemon were colours of choice and the purple-blue 50s style skirt was perhaps my favourite piece of the night. I’m calling it ‘modern vintage’.

Limedrop hit the ground running in a short jade green dress with draping to the sides and V neck with strapping detail. A gorgeous flowing patterned dress with shorter front and longer back cottoned on to this up and coming trend, while harem pants, a polka dot print top and grey boyfriend blazer seemed the perfect outfit to take you from the workday to the weekend.

Greys were back when Above headed onto the catwalk in suiting and dresses. The sheer black blouse combined with the stark suiting provided a welcome difference in fabrics and styles while the structure of the halter dress almost seemed impossible to understand, draping wonderfully and seemingly held together by a single self belt. 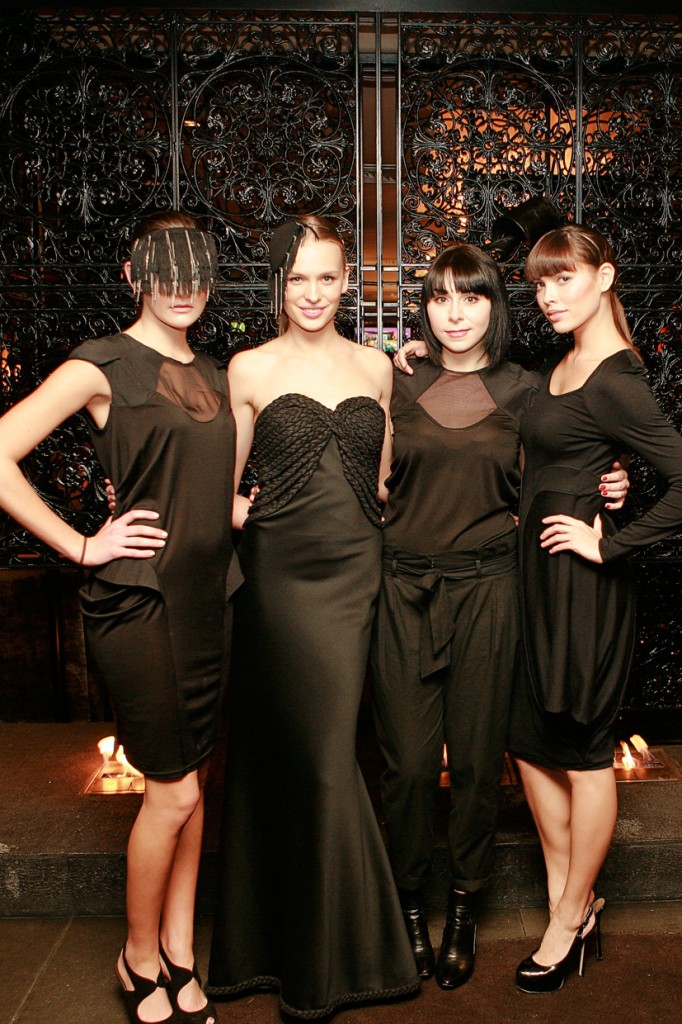 Jolet’s take on the traditional Melbourne black included two little black dresses and one long. The feature plaited rope detailing on the floor length strapless gown was divine and the architectural style of the shorter dresses made them futuristic in their point of difference. The fringed headpiece by Nikolina Kucan was a favourite.

Finally, MLY Black Label rounded out the night with a young collection that was a summary of all the Shine awards are about – fun, experimentation and freshness. The bow bodice on a metallic strapless ruffle dress would not be out of place on an MTV awards red carpet while the flowing print dress with racer back and uneven hem would suit both the races and a garden BBQ. The final dress of the night appeared to be a skin tight mini dress complete with wing-esque 80s feature shoulders but upon closer inspection was all fun in the front and all formal in the back; the model turning to reveal a floor length train – the mullet of the new century.

The judges conferred and the audience voted – Anna Campbell and Jolet nominated as the labels through to the final, with Limedrop the audience choice, also through to the final. From Melbourne, Sydney and Brisbane, a total of ten designers will compete for the major prize – their brief now to design an outfit for the Spring Racing Carnival on a budget of $1000. The finalists will parade their designs to judges from the Chambord Council of fashion industry insiders at the Chambord® Shine Awards 2010 final, scheduled  at Sydney’s Strand Arcade on Wednesday the 1st of September.

To be a part of the judging yourself, vote for your favourite designer to win the wildcard entry into the final. Visit the Chambord Facebook page to vote.

Sketchbrooke: A Day At The Café

Sounds like it was a fabulous night!
I’m heading over to the facebook page to cast my vote!
(Hopefully see you at next year’s event) x

Sketchbrooke: A Day At The Café

Onya Magazine is pleased to introduce a new resident illustrator to the team, Brooke Jury. Each week, Brooke will contribute...
© Onya Magazine 2009 - 2020
Back to top