Sunday night’s Urban Upbringing fashion show was a celebration of leather, black, Melbourne’s underground and the fashionably late. Feeling the effects from the night before, and huddled with a hundred or so others on the fringe of Rutledge Lane at 9pm, isn’t exactly how I envisioned spending my night and had I waited a minute longer I may have just packed it all in for the couch and a tub of ice-cream. However, once the head spins had subsided and I took humour from the posters of “doom” hanging from the walls above I was ushered through to the bright lights that lit the back-street runway, the rows of gleaming beer kegs for seating and a graffiti-ed catwalk – in a word, all very Melbourne.

At the top of the runway stood a gaggle of sombre models, clad in black and wrapped in tape. Cued by a soundtrack of Personal Jesus, they broke free and began sauntering down the runway, smoky eyed and adorned in a second skin – leather. The only hint of colour were the red Hunter wellies that decorated their feet – which in turn made you feel like the show had been digitally re-mastered in the guise of Robert Rodriguez’s Sin City. 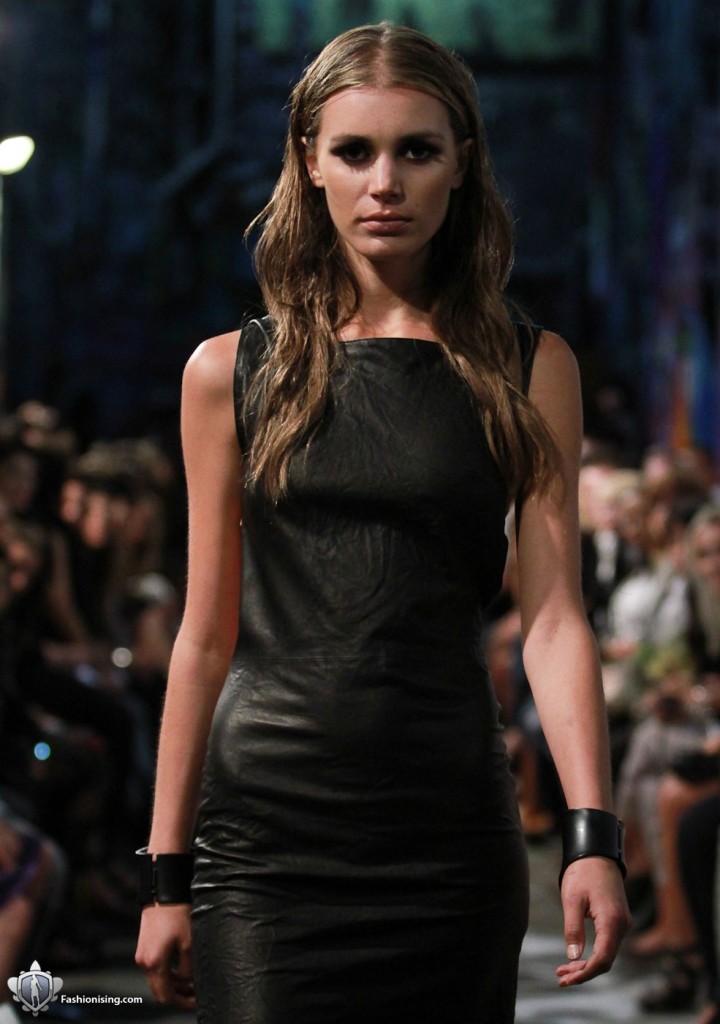 What we were greeted with was a whole lot of rock and roll, with black leather arriving in droves. For the men it was full length leather shirts teamed with shorts, for the ladies the highlight was the fitted shift dress complete with tan panel on the back, the first piece to elicit oohs and ahhs from the debonair crowd. Urban Upbringing was clearly off to a flying start – and this was even before an Amazonian model strutted down the catwalk in a leather harness, corset and snaked-to-the-knee platform shoes. 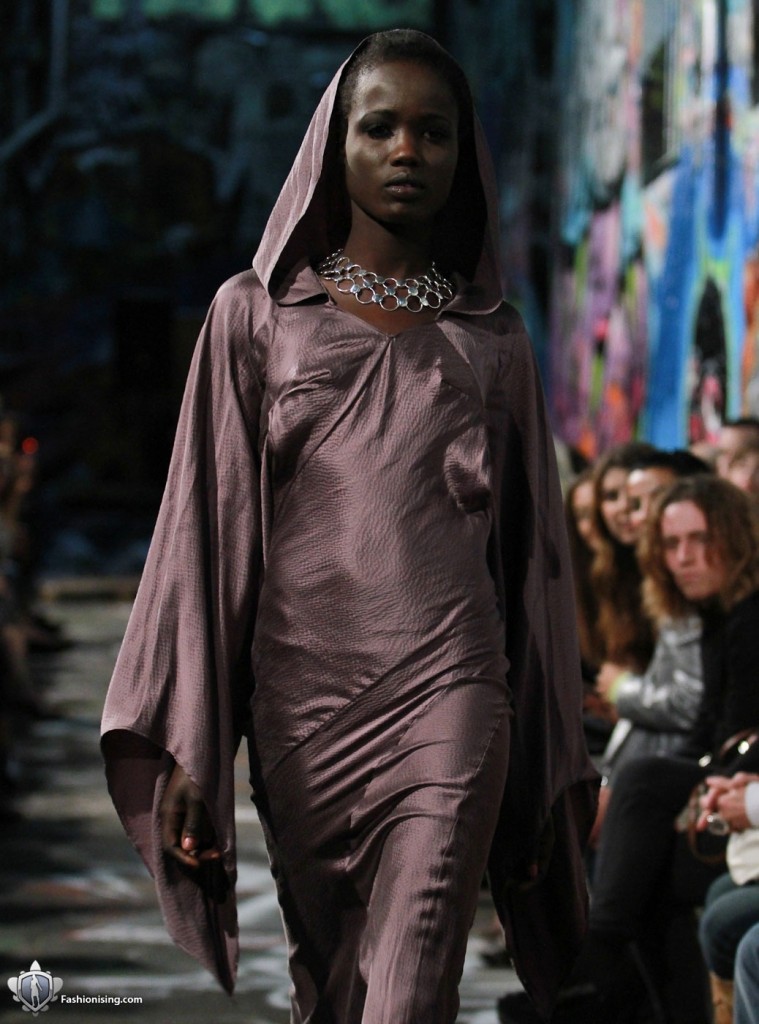 Fetishes and black leather aside there was a definite futuristic feel to what came next thanks to the slinky satin hooded dresses that took to the spotlight. But before we even had a chance to address the future, we were whisked back to the eighties thanks to a range of mini dresses accentuated with long billowing trains and capped shoulders – the kind that have you thinking of that ‘November Rain’ dress – although less ethereal and floaty and more sinister, gritty and oh-so very Melbourne. 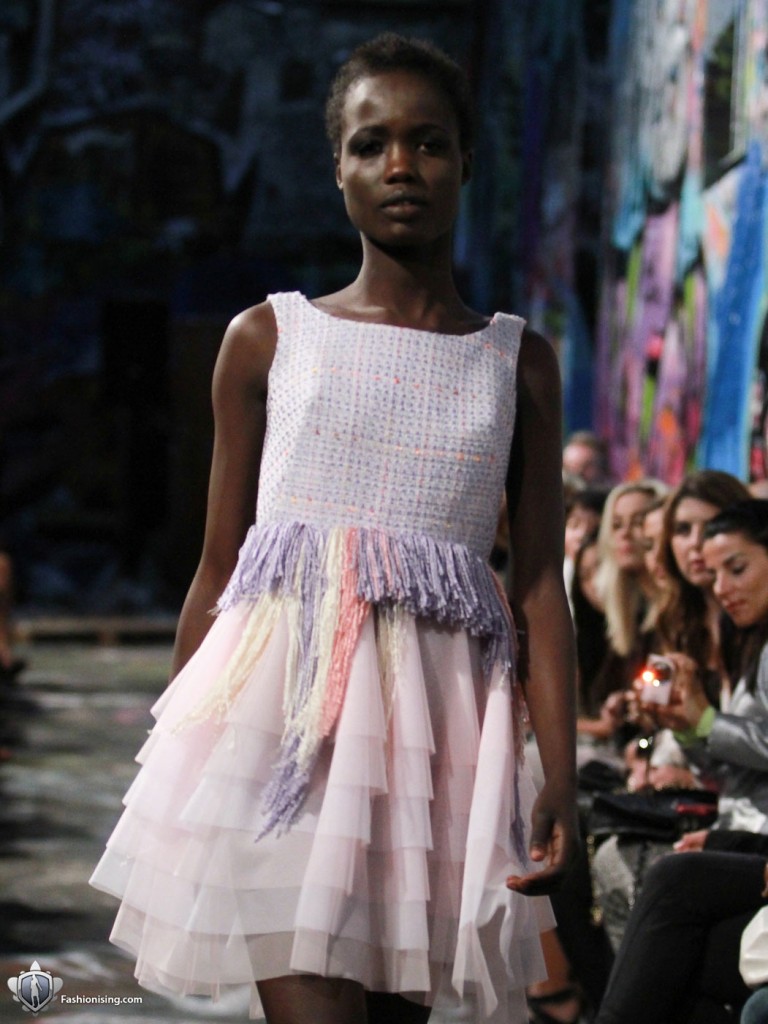 Just as I got the feeling that the infatuation for black was being further cemented into our city’s soul we were delivered with a shock of cream, a dash of embroidery and a whole lot of femininity. What followed was a collection of pieces that bordered along the delights usually reserved for the likes of Alannah Hill through to the (dare I say it) wool boucle jackets of Chanel. Pastels and tweed featured along with bows and ruffles, followed by the perfect answer to your childhood fantasy – a dress that almost looked like a cloud of edible fairy floss.

And then, like that, it was over. The MC was announcing after party drinks at neighbouring Yak Bar, and the crowd was dispersing into the night, no doubt their minds swirling with visions of leather and mermaid-like tails of billowing fabric.

Ciccone – Just Another Lippy In Your Bag?

Imagine the Eiffel Tour without lights. Envision driving around Paris, struggling to make its most famous icon out as it gives...
© Onya Magazine 2009 - 2020
Back to top