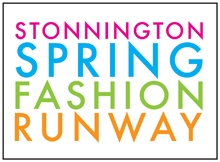 After a weekend of near perfect spring weather, it seems Melbourne is finally coming to the party and allowing us to indulge in some of the newest fashions of the season. Last week, the city of Stonnington put together a gala evening of fashion featuring designs from the major precincts in the area, and gave us a glimmer of hope for the sunny days to come.

The Stonnington Spring Fashion Runway was divided into four style categories – Urban, Racing, Party and Glamour. Each category presented six labels, including one emerging designer, with looks to take you from weekend brunch to the Birdcage at Flemington.

Beginning with Urban, emerging designer Jana O’Callaghan opened the show with gradient prints in black, grey and white, fluid draping and capri length cigarette style pants. Currently completing her fourth year at RMIT, Jana has also undertaken work experience with designer Yeojin Bae. Jana’s minimalistic style and fusion of comfort and quality was evidenced in her collection on the runway.

Labels Wonder by Ecolife; Roy; Chocolate City; Stevie and Ivory were also featured in the Urban category, many with uncharacteristic shades of grey for spring. Colours were generally muted, with the exception of some 70s colour pops, and styles were simple; basics were prominent. Many outfits continued to put opaque tights with dresses, a nod to the transitional weather.

Emerging designer Anna Linklater, of label Violet and I, was the Racing segment starlet. Already stocked in several boutiques, Anna’s third collection was stunning, with delicious colours and details inspired by an English rose being transported to bustling India. The label currently has a pop up store on Chapel Street and a promising future in the fashion industry.

While the Racing season has barely begun, labels Alannah Hill, Leona Edmiston Vintage, Soho Workshop, T.L Wood and Lisa Barron have clearly been working on their spring looks for some time. Shades of pink, purple and grey were the best bet of the night and a Leona Edmiston Vintage navy and silver metallic dress with open bell sleeve was one of my favourites of the parade.

It was time to turn the lights down and move on to the Party segment of the evening, beginning with emerging designer Jo Templin. Also in her fourth year at RMIT, Jo is currently working at Karen Willis Holmes in High Street and finalising her graduate collection, entitled A Moment Lost. Her futuristic designs and the dreamlike nature of her garments will ensure an amazing career in the Australian fashion industry.

Party labels Arabella Ramsay, Bettina Liano, Wayne Cooper, Eliza Baker and Lisa Ho like a good time and this was reflected in their outfits, all set for a night on the town. While muted colours were still popular, black and white made a traditional appearance in lots of one shouldered frocks and a touch of pinks and apricots. Mini dresses were the hottest trend of the night.

The final segment of the evening was entitled Glamour, and featured John Cavill, Rajat K Tangri for Noir Desire, Medwin, Mathieu Salem, Hemden and Connie Simonetti. Emerging designer Jack Loder, currently interning with Toni Maticevski, was the student featured in this segment with a collection inspired by Spanish phrase, ‘La Raizon de mi Vida’ – the search for a modern interpretation of the antiquated idea of couture. In his final year at RMIT, Jack’s designs were bespoke and clearly individual, making his mark on the world of fashion.

The established designers presented elegant gowns and fabulous frocks, metallics, sparkle and shine. Backless dresses were popular, as was the one shoulder gown, and fishtail trains. While traditional black was, as always, prominent, green, burgundy and silver also made an appearance. Strapless and full skirts made for divine glamour before the final bride and bridegroom looks wowed with the sheer elegance of design.

After such a fantastic collection of wearable, and available, fashion, we were then treated to the inductees to the Hall of Fame. The Stonnington Hall of Fame was initiated in 2001 to acknowledge and honour outstanding contributions to the fashion industry in Stonnington.  Joining the growing list of Australian fashion identities in 2010 are Arthur Galan and Robert Fritzlaff.

MC for the evening, Jan Jacklin from the City of Stonnington, interviewed both inductees before a parade of their past and current designs. This was a rare treat given Robert’s tenure in the industry, showing us beautiful vintage pieces from the 50s and 60s.

The Stonnington Spring Fashion Runway is a yearly event held to highlight the importance of the fashion industry to the area, where several precincts – Chapel Street, High Street, Toorak Road and Toorak Village – make up some of Melbourne’s best shopping. All the garments seen on the runway are available in stores now, just in time for the warmer weather.

AFL: A Winner, At Last

AFL: A Winner, At Last

On Saturday the AFL enjoyed a very historic day, just the third grand final replay in the games history. Unfortunately the match...
© Onya Magazine 2009 - 2020
Back to top