Behind The Velvet Curtain II 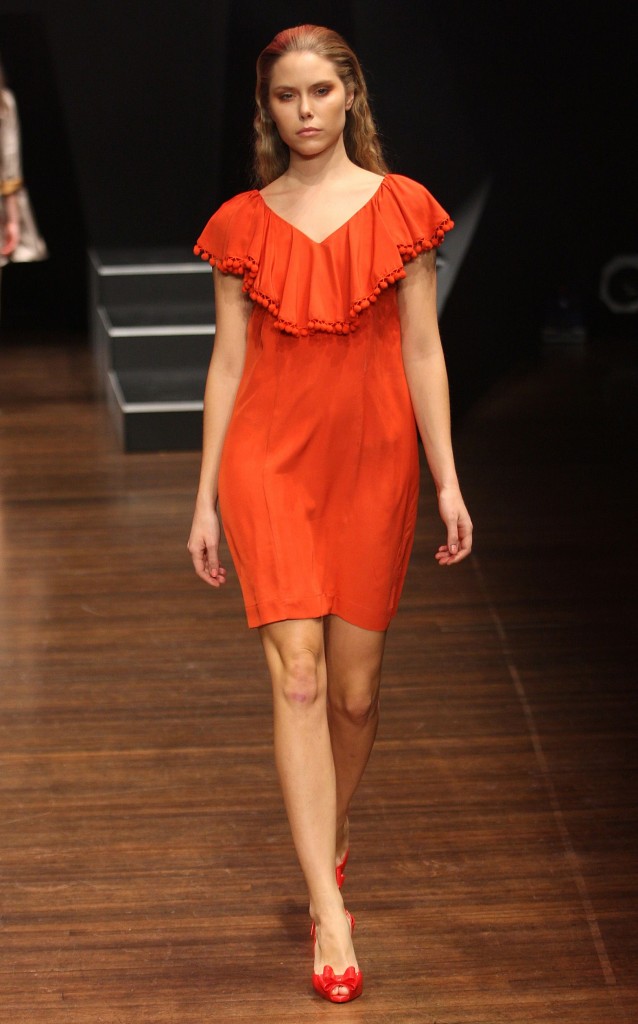 A piece from the Obus collection

There are some things that you just don’t associate with fashion. Chocolate is one of them. Sugar is another. But chocolate and sugar have been getting me through this week, and most of the team of volunteers at Melbourne Spring Fashion Week. Cocoa Farm Chocolates and Nutrient Water are two of the sponsors of MSFW, and it is thanks to them the volunteers make it through seven hours shifts on our feet. I find it unbelievable myself, but I’m still going strong after a week of parades, volunteer shifts, after parties and writing at all hours of the day and night – not to mention fitting in my day job in between. It actually wouldn’t surprise me if I stood on the scales on Monday, in light of living on chocolate and sugar, and if I had lost a few kilos over the course of the week. This of course would be no great disappointment.

Funnily enough, one of my major roles as a front of house volunteer this week has been handing out Cocoa Farm chocolates in the foyer of the Town Hall before the parades. Dubbed ‘The Chocolate Girl’, I am sought after by the fashionistas arriving for the Designer Series looking for an energy hit before a long night of fashion, cocktails and dancing. Wine Chocolate, by Cocoa Farm, comes in three varieties – Merlot, Shiraz and Pinot Noir. What’s that now? Wine Chocolate? Yes, that’s right ladies and gentlemen, some fabulously brilliant individual has taken two of our favourite things, wine and chocolate, and packaged them up nicely for us. Take it from someone who has eaten a fair bit of the stuff this week: it’s actually not bad. Confessions of a backstage volunteer – I’ve even seen the models scoffing the stuff.

Friday night’s designer series parade featured grungier young labels; Alpha 60, Arnsdorf, Fat, Gary Bigeni, Antipodium, Obus and TV. From the minute the lights went down, it was clear the show was going to be different to the sophistication and class of the previous evenings. Alpha60 started the evening with a short film displaying the message ‘how you fall doesn’t matter, it’s how you land’. The screen showed images of falling models, a man and a woman in a hallway falling along the walls and a boxer flashed up intermittently. The show began – models didn’t pause for photographs but rather walked to the end of the runway and turned immediately. Their fluid motion was reflected in the draping and layering of the fabrics seen at most of Friday’s parades. Alpha 60 and Gary Bigeni must be keeping the textile industry in business this year as their designs featured yards of extra fabric and wonderful draping. Gary Bigeni seemed to stick with a lot of winter colours and styles – long dresses in grey and black and cardigans more suited to a comfy night in on the couch. Meanwhile, at Antipodium, boots were still on show but possibly my favourite spring trend is back with a vengeance – the classic Sex and the City influenced flower corsage. This season it’s bold in colour and design – a solid flower, featured in a cluster. Black, cream, blue and magenta corsages as necklaces and brooches were styled into the Fat collection, alongside a return to feminine bows on headbands. This was a direct contrast to the androgynus shirt and pant styles seen earlier. 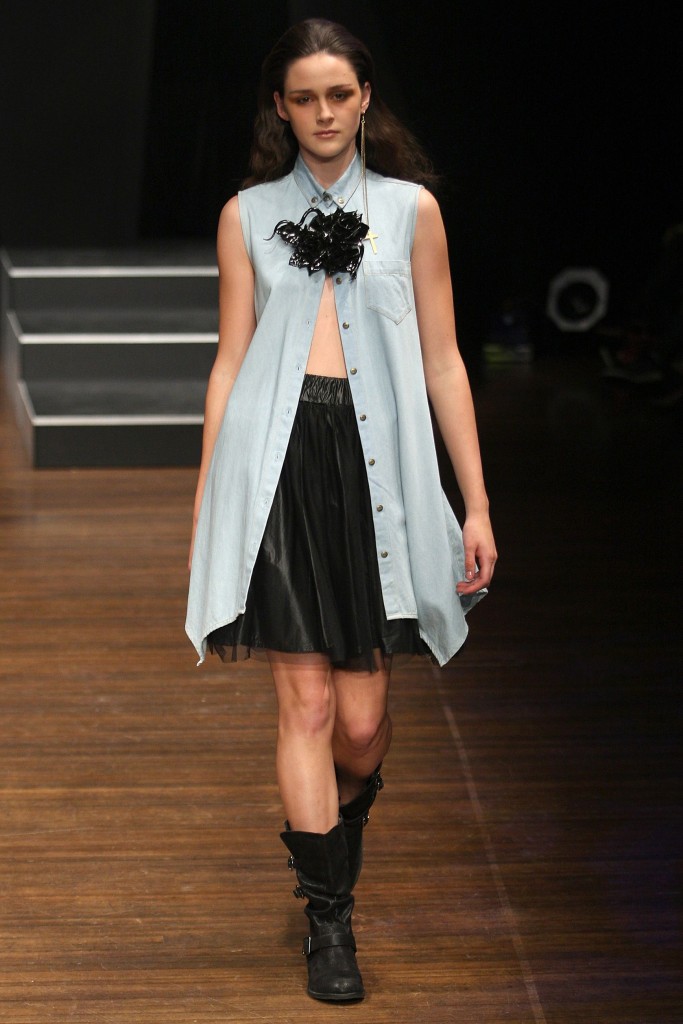 Futuristic geometric patterns and designs returned to the catwalk at Alpha 60, Ansdorf and Obus. Obus also were the only ones to feature bright colours: sequined rainbow motifs on skirts and boleros with blocks of solid orange and red on summer dresses, with yellow Melissa by Vivienne Westwood shoes. Antipodium made me regret a recent eBay sale of a hot pink Banana Republic skirt – two nights in a row hot pink skirts have graced the catwalk, while denim shirts on show will have me rummaging through Mum’s wardrobe for a vintage piece.

The photographers loved the designs by Fat – evident when the room lit up with flashes when the first model made her way down the catwalk in an orange babydoll dress with ruffle. Some of the Fat designs would easily translate into corporate wear – others such as a skin tight full bodysuit in a rainbow of colours would not. TV had some great wrap dresses and short shorts, taking the wearer from the office to a beach party. The theme of Jungle Jezebel was easily interpreted by the colour palette of tans, greens and oranges but I did wonder about the tickertape style wigs in black and purple.

Some really interesting interpretations of upcoming trends were seen last night, I think best critiqued by the gentleman I was sitting next to; a fire warden for the City of Melbourne. The guy was hilarious, but clearly had no clue about fashion – he was more concerned about the overselling of the Town Hall and how he was going to get everyone out in the case of an emergency. His comments about a scarf top – ‘no daughter of mine would be going out in that!’ – and the notorious bodysuit – ‘is that meant to be a joke?’ kept me amused and grounded while watching the show, and also provided the perspective of an everyman.

He wondered why the models didn’t smile, looked on in horrified amusement when one of the girls removed her shoes after an ankle slip and boogied in his seat when ‘100% pure love’ pumped through the sound system. He was even shocked by the fact that the models had apparently been eating pasta backstage. Just wait ‘til I tell him about the chocolate… 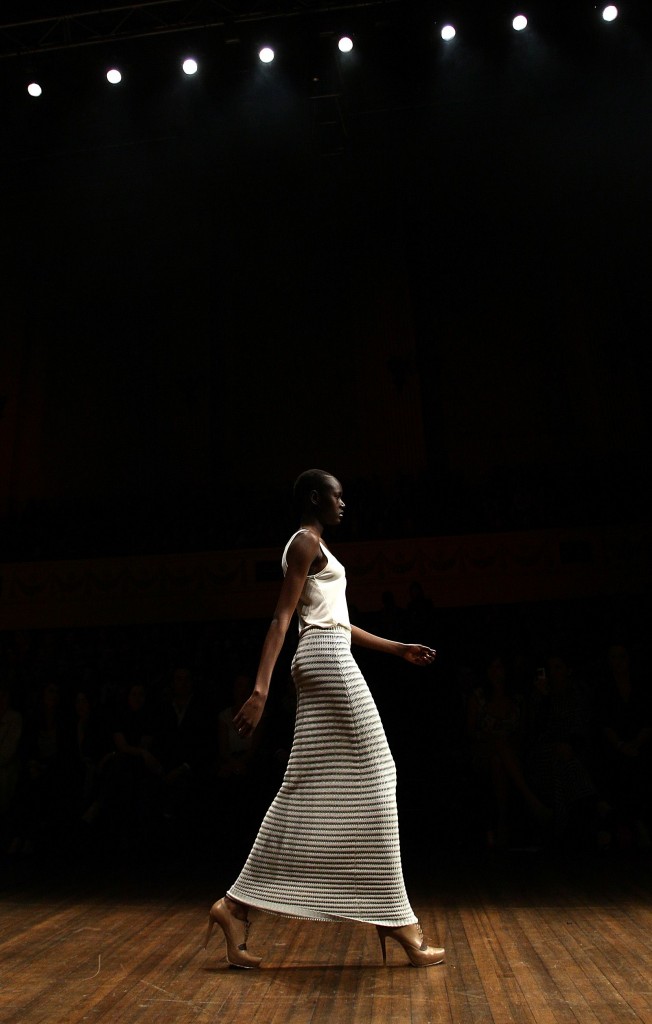 By Sarah Kempson As a true fashion lover, I am prepared to wear shoes that hurt my feet, belts that make it hard to breathe...
© Onya Magazine 2009 - 2020
Back to top