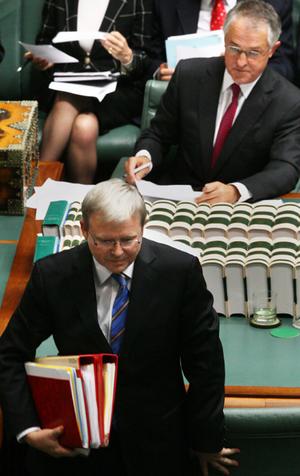 I want to describe the recent political battle between Prime Minister Kevin Rudd and Leader of the Opposition Malcolm Turnbull in Boxing parlance. I want to explain how Turnbull struck the first blow before the referee stepped in to restore order. I want to depict Rudd then parrying the next shot before landing a haymaker of his own, forcing an end to the fight by Technical Knock Out.

The reason is that, in political terms, this was nothing more than playground sparring. The kind where the scrawny chancer, high on additives plucks up the courage to charge at the acknowledged top-dog before receiving a suitable hiding for his troubles and returning to his (now diminished) gang of mates. Throw in Swan and Hockey and you have the tag-team “he started it” no “he started it” vultures goading the pugilists on from ringside.

The problem, according to Turnbull, was that our esteemed leader had abused his authority to ensure the favourable treatment of a former business associate from Queensland. Or, as Kevo himself would no-doubt call it, “givin’ a mate a fair shake of the sauce bottle.” In return for such a daring act of espionage and patronage His Ruddness would receive favourable terms on a second hand Ute. You really could not make it up. The most volatile political kerfuffle in two years over allegations of acquiring a second hand Ute by dubious means. Only in Australia. One can only wonder what would have happened if there was also a slab of XXXX in the trunk.

Yes, I know that an abuse of power by the democratically elected leader of the country is reprehensible. I am aware that it is the responsibility of the Opposition to raise and challenge such perceived abuses. But really, was this the fight to pick? From the outset Turnbull’s camp had one objective, the forced resignation of the PM or his Treasurer. The ultimatum delivered in Parliament, the press and on talk-radio that the country’s leaders should prove their innocence or resign was fanciful from the beginning but this did not prevent Turnbull wrestling the wheel and driving full-speed into a shit-storm without first checking his blind-spot.

You see, when you accuse the mot public figure in the country of defrauding the taxpayer, it is a good idea – no, remember politics 101 – the starting-point, to have incontrovertible evidence that there is significant and malodorous wrongdoing. Unfortunately for the Liberals all they had was an email of dubious origin that was not even within their possession. Worse still the ABC is in the process of revealing the inquisitors to be colluding with the source of the supposed toxic leak that sparked the whole furore. A leak that in turn has been proven fraudulent by the police.

In summary, the email purporting to implicate senior officials in fraud was a fake. The Opposition was aware of the uncertain origins of the fake email. Knowing this, they still challenged the Prime Minister’s integrity in the most public manner possible. It took a total of one brief Senate inquiry, one day of police investigation and one interview from Kerry O’Brien to dismantle the house of cards from the ground up. With this level of ineptitude to work with is it any wonder satirists are choosing to mock dying children?

The situation (however unfounded) does raise the first serious investigation into the Prime Minster’s integrity. Following on from the air-rage and ocker interviews it adds to the developing image of Mr Rudd as more than the bookish linguist he presented himself as two years ago. Which has started me thinking – which is the act, the urbane accountant or the flash jack banana bender? Is Rudd secretly a redneck in accountants clothing? It will be fun finding out.

The outcome of all of this will inject some extra lead in the government’s pencil and the delivery of a massive, potentially fatal blow to Turnbull’s prospects of becoming the next Prime Minster. The only positive to have emerged for the Liberal leader in recent days must be the news that arch goal-hanger Peter Costello has finally announced he is bored of playing dead man’s shoes. In classic Costello style however, he couldn’t have got his timing much worse.

Political judgement in contemporary Australia seemingly still has some way to go.

“…..But really, was this the fight to pick? From the outset Turnbull’s camp had one objective, the forced resignation of the PM or his Treasurer…”

and herein lies the problem. Turnbull had his eyes on the outcome he wanted – and not on the issue.

Receiving political donations in cash or kind is legitimate and all parties receive them. As long as Rudd declares a pecuniary interest (which he did) then there is no issue. The question was, did he give the Car dealer a kickback or special treatment.? The car dealer didn’t get a cent of public money but he may have had Swan go the extra mile to help him get finance from the OzCar scheme (finance which he didn’t get, by the way) at a time the Government was doing all it could to save the local car industry and the jobs that go with it.

Turnbull, weakened by his inability to get any traction against the Government, was sucked in to thinking he could claim the scalp of the Prime Minister. Whomever advises him should take a cold shower.

In the process we learned that having the numbers in the Lower House not only gives you Government, but can save your (Swan) bacon. We learned that Turnbull is not as clever a politician as he needs to be to lead an effective Opposition, and that Joe Hockey isn’t half as funny as he thinks he is.

Completely agree Sean. Turnbull and Hockey come out of this dreadfully. Politicians on the whole make behaving normally look difficult so when they’re publicly boasting and making extravagant claims about issues the public couldn’t care less about they just seem farcical. I still cannot fathom why they went so hard so early on such a minor issue against such a strong leadership unit enjoying favourable public opinion.

By Jonathan Howcroft It would be hard to review a Steve Kilbey CD without referring to his iconic status as the voice...
© Onya Magazine 2009 - 2021
Back to top