Onya Pollies: Week 2, and Counting Down 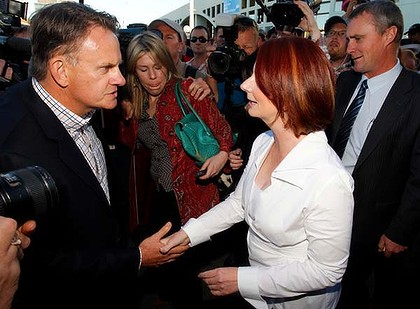 I’m upset. Well, more so than usual. Which is a pretty bold statement for me, considering how pissed off I am, all the time. 60 Minutes has made Mark Latham one of their journalists. Yes, that Mark Latham. No, not that kind of journalist. (Actually, considering the calibre of what we’ve got, it might be an improvement.) He tried to get an interview with PM Gillard while she was walking down the street in the greatest Paul Barryesque tradition; instead he pissed the ALP off something shocking. Now if political parties could only complain about the quality of political journalism overall…

In actual news, hell has frozen over and pigs obscure the sky: the Liberal Party are dumping the Internet Clean Feed. We hope. Rudd is making nice with Gillard, we think. Virtually overnight, Australian political campaigning has devolved into a wall of political books at an American Borders store. Let me explain.

I lived in Atlanta, GA for a while back in 2009. Everything was about twenty times bigger than it is here and their bookstores are no exception. Being the political junkie that I am (It blew some of my friend’s minds that I, a “backwards foreigner” was watching C-SPAN and understood what was happening, let alone found it interesting) I rushed toward the politics section. In America, the liberal/conservative divide is well and truly marked. The Magniot Line mentality is well entrenched. As for the Australian political battlefield, the war of attrition has well and truly begun in the Australian public sphere, more so in this election than ever before.

The game has shifted from convincing the public which policy will serve their interests the best toward denigrating the opposition at any given opportunity. In the States, books entitled “If Democrats had any Brains, They’d Be Republicans” and “Lies and the Lying Liars Who Tell Them: A Fair and Balanced Look at the Right” dominate the shelves and bestseller lists – not The Rights of Man or Leviathan or something that has more intellectual rigor and is riddled with less straw man arguments than “Spot goes to the park.” (I recommend Stuart Chase’s Guides to Straight Thinking with 13 common fallacies for the actual complete opposite to those books.) This slow decline of Aussie politics into my strange US Borders’ store analogy occurred in 2005 with the publication of The Latham Diaries; and we’ve been racing toward the bottom ever since.

I mean, trundling out former PM John Howard isn’t even electoral poison according to Abbott and co. The Real Julia Gillard can’t keep her campaign together and the Real Tony Abbott is fake unless he’s written what he’s going to say down in advance. Focus groups and day-to-day polling has ruined everyone’s fun (and balls.) It’s just he’s going to ruin this; she’s going to kill that. With a Labor government we’d be paying $10 for bread and in debt to foreigners forever. If the Coalition wins, we’ll all be working 50 hours a week for a pittance and coughing violently on account of not being able to find a doctor to visit. All the funding cuts everyone says the other side is making would virtually shut down our government in an instant. With all the tax refunded to the people, we’d all have enough scratch to buy machine guns to shoot out of our Hummers running on premium unleaded that can be bought for 30c/L. Not that there’s anything wrong with that, per se… 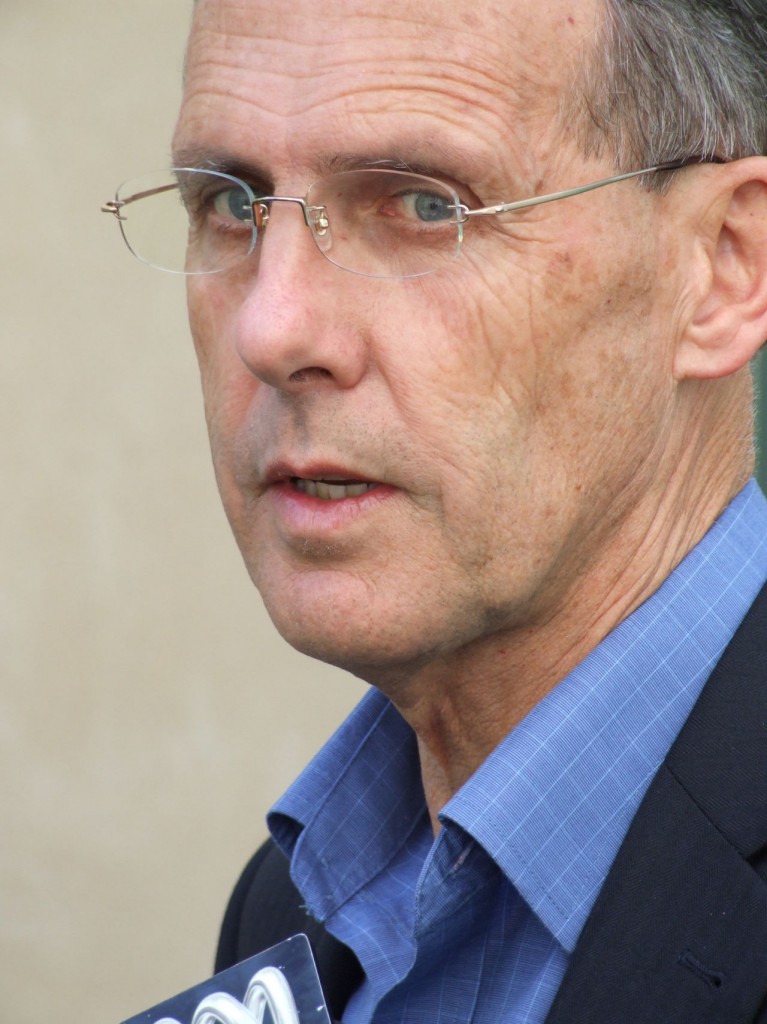 This chronic lack of public accountability could be a result of overworked and underinspired journos not asking the correct questions. In Hitchhikers Guide to the Galaxy, the answer to Life, the Universe and Everything is 42. Essentially meaningless. But the unfortunate thing was the probity was suspect, not the reasoning by the massive super-computer Deep Thought. Universities have subjects and even entire degrees based on political communication. Cookie-cutter questions have been tailored for pre-fabricated responses. When politicians complain of not “cutting through” to the electorate, they mean that their bullshit artistry isn’t as cunning as the opposition’s. It doesn’t mean their policies are any better, it doesn’t mean they’ve put more thought into it – it just means their PR and spin machines are much better oiled. We don’t need a tax on carbon emissions; we need a massive blanket ban on politician spin factory emissions.

Then the public has the gall to complain even though the last time they bought a newspaper was probably over a decade ago. You get the political campaigning you deserve, people! A tabloid culture whets its appetite over Craig Emerson who supposedly almost could have shagged Julia Gillard, not the ins and outs of macroeconomic policy.

Now all the Greens have to do get Bob Brown to start making out with his boyfriend and hopefully ACA will bust its nut to tell the public it’s a Muslim/shonky builder/foreign seafood conspiracy somehow. Hey, any publicity is good publicity, right? Seriously, are they still alive? Please, someone, let me know! Next week – the roundup of the campaign launches. Won’t that be fun!

“Now all the Greens have to do get Bob Brown to start making out with his boyfriend and hopefully ACA will bust its nut to tell the public it’s a Muslim/shonky builder/foreign seafood conspiracy somehow.” hahahahah!

nice one Tom, I really do enjoy your writing!

Any article that can somehow work a ‘Hitchhikers Guide to the Galaxy’ reference in there, immediately makes it to my favourites list.

Are you after a country escape but don’t want to resort travelling to a place that resembles a ghost town? Then Mildura...
© Onya Magazine 2009 - 2020
Back to top