Onya Pollies: The Fifth Quarter (And None Given) 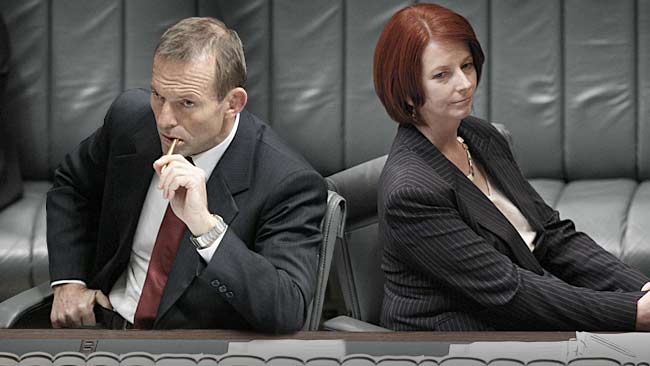 At about 10:30 on Election night, I was staring at ABC News 24 as Stephen Smith nervously texted Labor pollsters and Nick Minchin was anxiously awaiting real-time results from his Liberal colleagues from down the phone line. Neither of them was willing to call the election either way and at this point one of them would’ve kicked the spin into high gear – praising their own policies for triumphing over their opponents or blaming the media for undercutting their campaign and ruining their electoral prospects. But there was none of that. There was an air of uncertainty hanging over the room. Antony Green, in the first time since he started his unique election calculations had nothing. Political pundits had to re-write the maps of Australian politics as the landscape shifted so rapidly that their cartography would be inaccurate even before the ink dried. The Greens had won a seat in the lower house. There were swings away from incumbents in almost every seat regardless of affiliation. Worst of all, there was no clear winner. This political gunfight ended in a draw.

This country has only experienced such a result in 1939 – It worked until Robert Menzies tried to sell pig-iron to the Japanese in 1940. The independents at the time couldn’t understand why a PM wanted to sell iron to a world power that would eventually return it to us in the form of incendiary bombs and promptly withdrew their support to make John Curtin of the ALP Prime Minister. The Greens and their supporters are celebrating their win in the Lower House as they drive their Prius’ around the Paris end of Collins St, sipping coffees in Guy Grossi’s Florentino and lording it over everyone else – they did their bit for the environment and social justice – they wrote a “1” in a box! It’s going to be a revolution! Sorry to piss on your organically grown strawberries guys, but there are also four independents. That’s, well, three more than you guys. I’m also beginning to think the political communications lecturer that taught Sarah Hanson-Young at Adelaide University is the best in the country – all these guys think the Greens are the “no-spin” party: here’s a hint – that’s been their spin all along! Brilliant! Her glee was unrestrained as she felt herself the most powerful interviewee in the room next to George Brandis (Liberal) and Penny Wong (Labor) as Tony Jones quizzed them for explaining the result.

So what now? Both parties ran a lackluster campaign and they got the result that they deserved. Hey, you can’t argue with this slogan: “hung parliament – its gridlock we can believe in!” The three pre-poll independents are ex-Nationals with a thirst for NBN but no great love for Labor. Tony Windsor is a kindly fellow that stands up for his electorate of New England. Rob Oakeshott wants our parliament to assemble into a love fest – a grand coalition that comprises both sides of politics in a cabinet. Bob Katter? Well, When Bob Katter feels like a salad, he eats a vegetarian. So its possible we may see an Abbott-Independent government since Abbott will claim the moral high ground of getting one more seat than Labor (but it’s not a majority – it’s just a plurality! Figure the difference out!). If Labor play their cards right, a government that’s crippled by governing in the minority as well as having up to eight new Greens senators as well as one from the DLP from July 2011, we might be back here next year. I doubt voters will forgive the Coalition if they stuff it up, either. Sometimes you gotta lose before you win. Major parties never forgive and never forget – and neither does the electorate!

Tom is a political junkie that is overdosing right now. Please take him to bed, give him a glass of milk and put him to sleep before he starts foaming at the mouth. Follow his condensed pltcl cmmntry here.

Love and Other U-Turns by Louisa Deasey

Onya Magazine would like to thank the following sponsors of the Bridal Beauty Feature, and after rigorous review, highly...
© Onya Magazine 2009 - 2020
Back to top