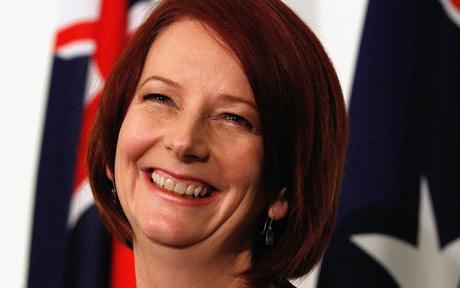 I don’t know about you, but on Facebook and Twitter, everyone’s a self-proclaimed expert and no one is afraid of hurting anyone’s feelings. Out of 14 million or so enrolled to vote, there’s 9 million of us on there – that’s “It’s ‘Y-O-U-R-E’ not ‘Y-O-U-R’ when referring to a possessive, dumbarse!” – trust me, you’ve either been on the receiving end or been pedantic enough to call a friend out on it. Scorned, you can get all bitchy and snarky on a number of levels. Your music taste sucks. How dare you call MasterChef crap. I wouldn’t piss on Robert Pattinson if his sparkly arse was on fire. Hidden, blocked, deleted. Oh, the decline of our electronic civilization is accompanied by the shrill cries of Farmville cows being shot up by Mafia Wars goons.

Facebook and Twitter and the like aren’t media to get to know your friends better. They’re pages filled with hand-picked information designed to show off, posture and jostle for attention among hundreds of other people on your friends list. You become abstracted. You like X, Y, and Z. You, as yourself as a whole in your environment, is reduced to a name on a screen with a picture of you at a dutch angle in the vain hope no one notices your double chin and pimple on your nose.

Yes, this election has been as bland as tofu. Yes, it’s been run by a media circus and a bunch of clown journalists. It’s also held a mirror up to our culture. It’s basically saying that we’re all just abstracts on Facebook and we don’t care if you get upset if we make snide remarks at you. During the Liberal Campaign launch last week Nationals Leader Warren Truss, Deputy Liberal Leader Julie Bishop and Tony Abbott all got up to speak. They reiterated Labor’s perceived failures, shortcomings and weaknesses. In their own words. Three times over. At the end of the fanfare, I wasn’t really sure what they were for; well, I figured they were against sitting down for Australia and were averse to fake action. Or real indolence. That, and in their opinion, Labor is incapable of remaining in Government. Essentially, the Liberals were calling Labor out on having a bad taste in music, liking Twilight and spelling “You’re” as “Your” inappropriately. Where’s my appeal to reason? To logic? To my hip-pocket? To anything? Or was that the point? 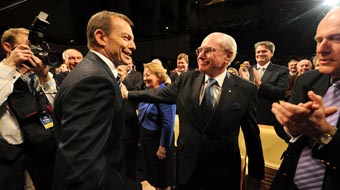 Tony Abbott isn’t a techhead, which shows, because most of the IT geeks I know never call themselves techheads. Ever. Media ecologist, the late great Neil Postman once said as an indictment on our culture that “it’s a good thing to give an answer even if there is none to give, even if you don’t understand the question, even if the question contains erroneous assumptions, even if you are ignorant of the facts required to answer.” ‘Nuff said.

On Facebook, there’s also a bout of the “poor me” mentality. I just got soaked in the rain. I hate Mondays. My footy team lost. Julia Gillard seems to be having a few of her own “FML” moments herself. “I just told the entire electorate that the Federal government isn’t the same as the terrible State governments, insulting their collective intelligence, FML.” But don’t worry, with Antony Green on your side to kick arse and take statistics, you’re home and hosed.

Which finally takes me to the Greens. No – I haven’t forgotten about them. Completely. They can’t really get a guernsey this election despite their poll results hover around a 11% share of the primary vote. In our political climate we’re racing toward a Presidential style (how many of your friends have said they will vote directly for Gillard or Abbott, despite not living in their respective electorates? You’d be a millionaire if you had a dollar every time you heard it? Me too.) and the focus on the parties is not so prominent. The Gruen Nation, the Gruen Transfer’s election show produced short “pitches” or advertisements for each of the parties. I have to say, the Greens’ pitch is so effective it should win an award – despite being restricted from broadcast by ABC’s impartiality rules.

Now that there are only a few days to go, we have to ask ourselves who to vote for. Not too often, because that will just make us sad, angry and feel impotent since we won’t see any real change. FMLs.

Oh – and watch out for my Onya Pollies election roundup on the 19th featuring the (less sarcastic) opinions and impressions of the campaign from all your favorite Onya Mag writers.

Tom Valcanis was a beat cop that was cruelly cut down in the prime of his life. Omni Corporation took him and rebuilt him into a machine-like killer with a vengeful lust for justice. Wait, no he isn’t. That was Robocop. Follow him on Twitter here.

With ‘saving ordinary humans from themselves’ as their mantra, Evo has created a line of sweetly scented, humourously...
© Onya Magazine 2009 - 2020
Back to top