Eating Electronic Soap: The Fight To Stop The Clean Feed

If there’s nothing more frustrating than trying to be productive on the internet in Australia; the lack of speed, wireless connectivity and overall infrastructure notwithstanding, then it’s the current plans by the Federal Government’s bid, most notably that of Minister for Broadband, Communications and the Digital Economy, Senator Stephen Conroy, to create a “Clean Feed” for all Australians at the Internet Service Provider (ISP) level.

The Clean Feed, put simply, is a policy devised by the then opposition leader Kim Beazley and adopted by the Rudd Labor Government to block “offensive or refused classification” content from reaching Australian end users at all. The aim of this program is to supposedly protect children that are vulnerable from potential parental computer illiteracy. What the Clean Feed sets out to achieve is the complete and total protection of children from harmful material and to halt the spread and use of child pornography and other offensive content. Websites deemed inappropriate would initially be vetted by the statutory Australian Office of Film and Literature Classification (OFLC) and be “refused classification” (RC) according to current film and video censorship guidelines. RC material is content which “offend[s] against the standards of morality, decency and propriety generally accepted by [hypothetical] reasonable adults”. Then, once these sites have been identified, they would be added to a blacklist administered by the Australian Communications and Media Authority (ACMA). If an end-user attempted to access one of sites on the blacklist, they theoretically would not be able to view the page. The blacklist would not only restrict violent or obscene content, but also could possibly shut people out from information about euthanasia, certain RC movies, books and information about computer games previously banned by the government due to the lack of an R18+ rating.

With all civil libertarian arguments aside, the Clean Feed would pose a grave threat to our nation’s well-being as a geographically isolated economy and liberal democracy living in a hyper-connected, and increasingly “globalized” world.

The first assault on the Australian information communications technology (ICT) industry is the lack of debate about the Clean Feed according to Colin Jacobs, Vice-Chair of Electronic Frontiers Australia, an organisation dedicated to promoting online liberty and leading the charge against the Clean Feed.

“The legislation hasn’t been introduced into parliament so we’re hoping there will be a debate. The Coalition and the Greens are already on record as opposing this. With an election coming up next year and what the Senate will look like after that election who can say, so whether it will get the scrutiny it deserves at that point, we don’t know,” he said.

As for businesses that are becoming increasingly reliant on the Internet to conduct their operations, the fact that they could be inadvertently added to the ACMA blacklist at any time without warning could prove catastrophic.

“So in the future, a business, for whatever reason it may get on the list, will only know about it by a huge decrease in traffic; that Australian web servers are blocked from accessing their site. That’s because there’s no method in place for rectifying this. Any sort of business that finds itself on the list would have a very difficult time having themselves removed.” 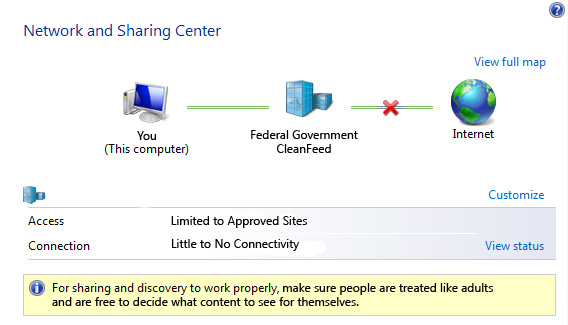 The shift toward “censoring web content from any web server anywhere in the world” is remarkable as it is frightening, especially since the ICT industry as it pertains to the Internet is largely self-regulated by the industry with bodies such as the Australian Domain Name Administrator (auDA) acting as arbitrator with little governmental oversight – so why would the government even need these extraordinary powers?

“It would be a global censorship regime, separate to the powers that apply to books and movies and a tremendous move from what we have in place at the moment. Why [the government is] doing it? Most of the speculation includes living up to a campaign promise that was made in 2007 to increase cyber safety as well as a personal zeal on behalf of [Minister Conroy] to remove obscene and disturbing material including child pornography from the internet,” Jacobs explains.

“Some of these [policies] are not controversial – a lot of people would like to see that material removed. But the mechanism by which they’re going about it will be ineffective and democratically fraud. The aims of the filter are actually pretty unclear; is it to help children to be safer on the internet? Is it to stop child pornography? Is it to remove disturbing material that just has to be buried at whatever cost?

“If they’re doing it for cyber safety, it’s not a very effective policy at all. Therefore, there are much better things that parents can do such as installing a filter in their home which would be much more comprehensive, aggressive and customized for the individual needs of the user. A national filter can do none of those things.”

The fact that not many know how or what the filter will do if implemented has drawn ire from Australians both here at home and expatriates abroad, which has culminated in online protest groups formed on social networks such as Facebook and Twitter. Dwaine Bailey, creator of the “We Won’t Accept It – No To Mandatory Internet Censorship In Australia” Facebook group ,which currently has over 25,000 members and an organiser of protests in every capital city, says that “the Clean Feed needs a national protest because it is a national issue.”

“This doesn’t just affect a minority of citizens in our country, it affects every single individual,” he said.

“If it were another issue at this level, say the right to print any (non-defamatory) material we wished in newspapers, or the right to publish or read any book we wanted, people would not be questioning the fact that we should protest. It is the same kind of issue we are talking about here, but technology is still scary for a lot of people born before Gen Y, and so it is easier for people to slip into complacency.”

He too argues that the Internet filter would be unsuccessful at achieving its aims at the expense of the freedom of the individual and speed of their connections; that people would still find away around the filter by downloading inappropriate material from non-web sources such as BitTorrent and P2P servers.

“As far as I can tell, from all of the research reports I have read, the Government may as well not bother implementing their National Broadband Network and the Clean Feed simultaneously – the speed drop will still be noticeable,” he believes.

“We are moving scarily close towards a society where our ability to freely access information is at risk. I remember that there was an issue in Britain, where the entirety of Wikipedia was blocked, simply because one image was deemed inappropriate. The IT/ICT industry especially is going to suffer here – mostly due to their ability to access the Internet at a reasonable speed, but also the ‘not knowing’ factor that one day the website they are producing, or the research they are performing, may be blocked (rightly or wrongly) by this filter.”

The mere notion of this filter as an experiment in fighting the scourge of child pornography and other obscene material seems like a direct attack on the democratic principles of Australia that most citizens take for granted, yet strive to uphold. The filter could even be used as a political tool by special interests to gain leverage over others and as an inoculant against public discourse in the future, Mr. Jacobs says.

“Certainly I wouldn’t accuse the minister of getting this blacklist in place so the government could clamp down on websites that are politically sensitive and embarrassing for them personally; I don’t think that’s the case.

“However, it doesn’t follow that there aren’t any risks to free speech from the implementation of this filter. The first thing we worry about even if it’s brought in to combat the extreme sorts of filth that the minister likes to talk about, once it’s in place, the scope is bound to increase in the future. If it doesn’t under Conroy, it may under the next government. Some MPs have given their opinions on what should be on there; anorexia websites, all pornography and etc. Other special interest groups will also be lining up to push their agenda with this and future governments about what should get on to the list. It would be a fair way to go until we found political material on the list, but there could be a lot of material that would be blocked that we currently all agree probably shouldn’t be.”

You can keep up to date with Tom’s work here: www.crushtor.net

This post was mentioned on Twitter by crushtor: Read my article @OnyaMag about the fight to stop the AU internet Clean Feed http://bit.ly/4Smvj7 – Pls RT!…

By Sharon Green Boy meets girl. Boy falls for girl. Imagine this boy’s name is John Lennon but everyone calls...
© Onya Magazine 2009 - 2020
Back to top