Australia’s Live Export Shame – And What You Can Do

Living overseas, quite often I’m slightly behind the eight ball when it comes to what is sweeping the nation back home. Truth be told, a lot of the time, I’m too busy hailing my precious homeland as one of the most extraordinary, unique, free places to live in the world, to notice who won Origin or speculate as to whether Cate Blanchett should be appearing in carbon tax advertisements. I’ll say it now – as a misty-eyed Aussie living overseas, I’m just so damn proud of my big, beautiful country and its wealth of flora and fauna, it’s incomparable history and its standard of living. Compared to so many other places in the world, we have it good.

A few days ago, my mother, perhaps one of Australia’s most passionate environmental warriors, a woman our country is lucky to have, Facebook bombed me about the live export issue. In a series of wall postings, she demanded I sign a petition and get everyone I know to do the same. She painstakingly pasted a similar message onto the wall of every single one of her 28 friends. Then came the email deluge. I wasn’t entirely sure what she was talking about and so went to view the footage, as directed. I made it through ten seconds before I had to turn it off. And then I went and signed the petition and started to assemble my own Facebook bomb. 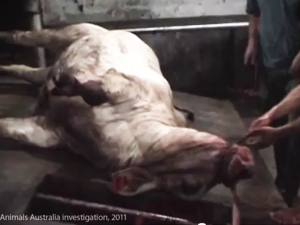 Yes, I’m embarrassed and yes, I’m ashamed. We all are. Yes, I feel so sick watching footage of those animals being beaten, cut, whipped, tormented into semi-consciousness and then dismembered, some, according to the RSPCA, still conscious. We all do. But more than anything I am just terrifically sad. Terrifically sad that something like this happens – has happened and continues to happen – and that, given this, it’s clearly considered acceptable by the people who knowingly send our animals off to this brutal end.  It seems that so long as no one knows about it, we can keep stuffing sheep into cars, cattle into cages, and shipping them off to barbaric, disgusting wildly inhumane deaths. It doesn’t happen here, we don’t see or hear the evil, so it’s all good.

It isn’t, and now we’ve seen and heard the evil, and we have to stop it. At the very, very least, we have  to try. We live in a country that affords us terrific freedom, where we have strong ideas of what is wrong and what is right and where we are able to make noise about what we do and don’t agree with. We need to use that ability now. Because, the thing is, we can’t just be outraged and then, a week or so later, forget. Or tuck the images of groaning cattle and slumped sheep stuck in a car boot, into a part of our brain we can’t access with any great ease. It’s what would make life so much easier for our government – but when it comes to this gross breach of humanity, we can’t afford to make anything easy for anyone. To shake our fists for a week and then move on, isn’t enough. It might assuage our conscience, make us feel better, but it won’t do a thing. 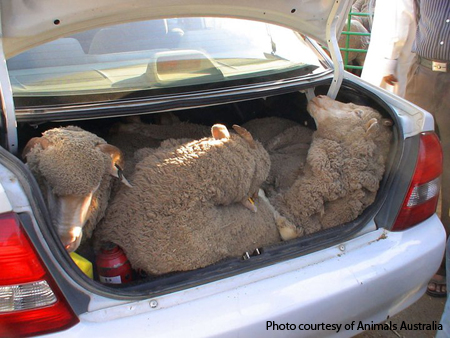 If you haven’t signed the petition, sign it. The next step is to get the ad on TV, so it’s in our faces all the time. So we don’t forget. So we can’t forget.

This is happening to our animals. It is enabled by our country. It is still happening. Feel ashamed, feel sick, feel outraged. And bloody well do something about it.

Update: Hours after this piece was written, our government responded to the noise its country made and temporarily suspended all live export whilst they inspect Indonesian abattoirs.