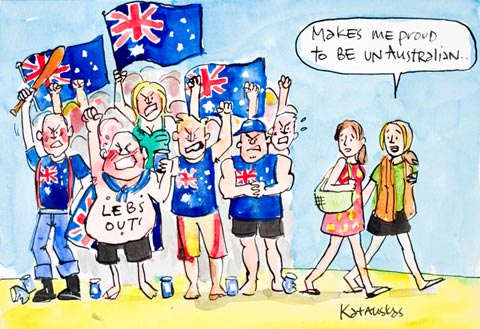 Have you noticed how, in recent years, it appears possible for an Australian person to actually be ‘un-Australian’?

This label (which really makes no sense as its meaning contradicts itself) has become the highest insult one can receive. It is often dished out by the most powerful person in the nation – the Prime Minister – so it must be really, really bad and involve some type of punishment.

Perhaps banishment from our great land?

However, after much research (or not – come on, that would be un-Australian), I have found that this removal from our nation actually takes place metaphorically. 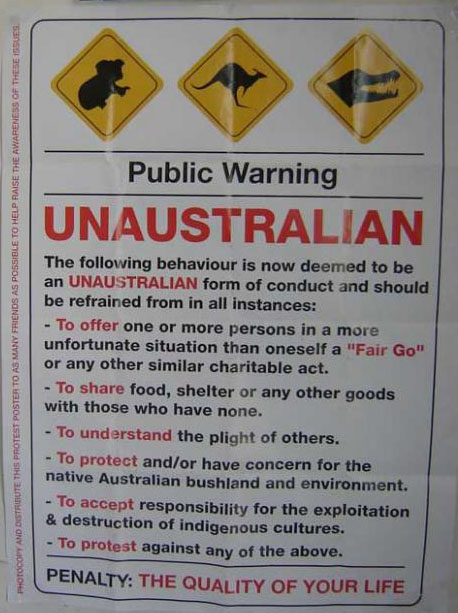 A little like the ‘naughty corner’, where you are placed until you do something to redeem yourself, at which time the powers that be (in that case, the Prime Ministers of your household: your parents) once again call you a good girl/boy.

Un-Australian-ness is judged on a case-by-case basis. And the length of time you remain un-Australian varies, dependent upon your next act.

Here are the Top Ten ways to be branded as un-Australian, and tips to once again join the waves of patriotism:

· It is now un-Australian to get blind drunk. However, if you yell out, ‘It’s my shout!’ then you’re once again Australian.

· ‘Selling out’ is un-Australian, à la Peter Garrett. But if you get up on stage and sing a massively bogan tune to a crowd, then you’re back in.

· Vegetarians are un-Australian. We want meat-eaters in this country. Until such time that you prove a vegetarian dish, such as pavlova, is worth eating. Then you’re a legendary Aussie.

· Meat-eaters, like Sam Kekovich with his lamb chops on the BBQ, are un-Australian. But when they cook a steak to perfection and serve it with mushroom sauce and chips…well, they are almost given the Australian Of The Year award.

· Those who wear Crocs in public are un-Australian (or are they just daggy?), but if they change into a pair of thongs, all is forgiven.

· Refer to an ‘Esky’ as a ‘chilly bin’ or a ‘car fridge’ and you will be laughed away from the campsite. Grab a can of V.B. out of your chilly bin and you’re welcomed back around the campfire.

· Those who take a sicky after a long weekend have been declared un-Australian. Unless, of course, that sick day is used to have your body tattooed with an image of the Southern Cross. Then no one can argue your patriotism, right?

· Being named Kevin was un-Australian. Until one was voted in as Prime Minister. Then all Kevins began celebrating their new-found Australian-ness.

· Eating a meat pie with a knife and fork is both ridiculous and un-Australian. But…no, sorry, there is no recovering from this one.

You know what? I think it’s un-Australian to call someone un-Australian. Controversial, I know. Strange and nonsensical, yes.

But so is the whole ‘un-Australian’ concept.

Fabulous article, Megan! Thanks for the morning giggle 🙂

We have just the thing for couples and singles who want to spend Valentine’s Day doing something special and inexpensive....
© Onya Magazine 2009 - 2021
Back to top