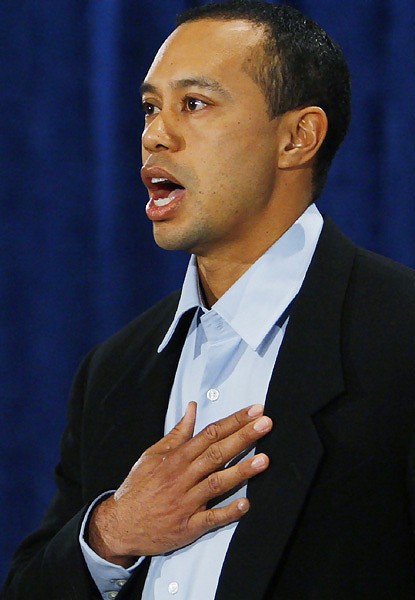 Unless you’ve been living in a hole, and even then, you might have some inkling of Tiger Woods’ dramatic descent from high profile athlete and wholesome family man to publically reviled adulterer. The story filled the pages of newspapers, covered hours of on air time and crammed inches of column space with everyone having their chance to weigh in. And once this particularly hyped story finally lost a little steam, Woods re-emerged in the public realm, with a well choreographed press conference, issued his apology, and once again, the public was fired up, ready to pounce.

The story has all the right elements of a particularly sordid tabloid narrative – a well respected billionaire sportsman, a model wife, porn stars, allegations of violence, a car crash and daily offerings of a new chapter. There was also very little substance on which to base the story, so the tabloid world filled in the blanks for us, providing outrageous coverage on a story that was otherwise black and white. A famous sport star cheated on his wife. In private. This is not a story of unparalleled firsts. In fact, it has almost become a rite of passage in the sporting world. And yet the indignation in which the media responded, it was as though the world had only just discovered the notion of adultery.

Tiger Woods is not an Australian celebrity, but he’s a sporting hero, which affords him the holy status we reserve for high profile athletes in this country, and thus, ensures him prime position in every media outlet in the country.

But why do we care so much?

I understand the interest in such a high-profile story, the type which allows us to all become self-righteous adjudicators of moral behaviour and pass on our judgements with delight. The spectacle of watching sporting celebrities crash and burn is nearly as captivating as the game itself. A sporting hero falls majestically from the top, landing in the world in which we mere mortals reside, and we watch the drama unfold like an Olympic Sport. Call it another case of schadenfreude, there seems to be a real thrill in society, where we take solace in knowing that multi-millionaire celebrities are just like the rest of us after all – except that they still have the private island in which to seek respite and we don’t.

There’s no sense in the media acting indignant towards his transgressions. Tabloid reporters have been rubbing their hands in glee, provoked by the sudden very public destruction of a relatively private celebrity, ensuring them countless story possibilities. Woods, unlike many of our own sports stars, did not voluntarily invite in the media throng. Golf is a game of control, rigid with discipline, where emotions cannot be present, and Woods remained dedicated to that, rarely offering an unveiled look at his private life. So this sudden glimmer into his world has sent the universe spinning, like a golf ball that has gone wayward, and we’ve lost all common sense, forgetting that after all, it’s really none of our business.

Woods didn’t hurt anyone outside of his immediate family (and maybe a few Las Vegas waitresses). His sponsors have stuck by him; his mother has stuck by him. Whether his wife has remains to be seen (and won’t that be a story). But one national paper ran the headline ‘Sorry Tiger…we don’t believe you’. Funnily enough, I don’t think Woods cares. Neither do his sponsors. The Woods story has almost guaranteed to be more profitable for him and for his sponsors. There are very few people who believe he won’t return in fighting form, when he makes his comeback in the golfing circuit and all eyes and microphones will be poised, waiting for the sensational headlines, another front page dedicated to Wood’s spectacular story.

Woods is certainly not the first to allow the novelty of sporting hero status to cloud his moral judgement and obscure the reality that he is indeed a human being, with the responsibility of upholding the respect and dignity that is afforded to him. He is just another in the long list of famous sports stars to transcend common sense and discretion. But ever since the tabloid reporting world managed to mainstream themselves as acceptable media outlets, we have been inundated with the slow decline of ours news becoming sensationalised by probing with impunity the private lives of public figures.

If Woods were a not sports star, but a politician, perhaps the situation might be different. Government officials operate on a level of public trust and personal integrity. Woods never promised to act with honour or moral decency. He didn’t do anything illegal, and what he did do pales in comparison to some of the more obscene indiscretions of other sportsmen. The only issue at hand is that Woods allowed his own hype to obscure his respect for others. And that really shouldn’t be a shock to anyone.

Woods is a brilliant golfer. It’s clear now that a winning game will certainly restore him to former glory, although “former sex addict” or “the golfer with a sordid past” will always precede his name.  But maybe he will learn to wear that tag like a pro.

Our own home-based sports superstar, a supposedly devoted family man, supremely talented and supremely reckless, Shane Warne made the tag work in his favour. After countless private offences turned public and imprudent labels placed upon him by the media, he appeared on Kath and Kim, with a self-deprecating, tongue in cheek representation of his mobile phone antics, and suddenly no-one held his wild behaviour against him. Adopting the attitude like a good natured Australian, he proved to the public that ‘it can’t be that bad if I can laugh about it.’

So perhaps Tiger Woods can take a leaf out of Shane Warne’s very own ‘Lessons on sinning in the public domain: how to win back the world’. Don’t hide your antics; open yourself up to be judged by everyone, throw in a couple of hours of well meaning charity work. Pretty soon, the public will forgive and forget and maybe Woods will earn a musical based on his life as well. And if that doesn’t work, well, let’s just hope he’s learnt his lesson and finds himself a mistress who won’t sell him out for a price.

This is so true and brilliant Jordi. I have been a Tiger fan for over a decade now and despite his indiscretions of late, I continue to knock it off as human nature, and a problem that if not easily solved, nothing more than what it is! It is so nice to read a bi-partisan view on the issue, rather than the usual ‘tiger-bashing’ that we see, only because of the fact that he is a ‘role-model’….Even Nelson Mandela was a prominent womaniser!