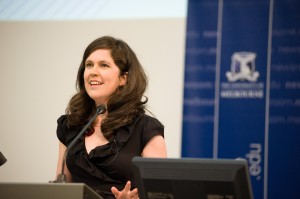 One year ago, Annabel Crabb decided to leave newspapers and take up life as an online writer. But not because she didn’t love her job; she firmly believed that her job at the Sydney Morning Herald was about the most fun job available in newspapers. Nor was she sick of her federal politics rounds or her work colleagues. She isn’t a tech-head either. In fact, she describes her relationship with information technology hardware as “one of intense mutual suspicion, flaring into occasional acts of violence” and claims that she really cannot be trusted around sophisticated equipment.

Quite simply, she made the jump to the digital space because it seemed like a good time to take a risk during a period where a group of enthusiastic executives – Mark Scott, Kate Torney, Gaven Morris and others – were embracing the new media environment with vigour. “We are all – especially those of us who love newspapers – exhaustedly aware of the threats that exist. I want, in this speech, to talk about the opportunities.”

And so began her experience of making the leap after years of working in an industry that had been so preoccupied with the threats of the internet. These days, Crabb writes for The Drum, which is the comment and analysis portal on the ABC’s website. It’s been running for less than a year, but readership is growing fast clocking 4.5 million page views in the first quarter of this year for The Drum/Unleashed and 9 million in the third quarter.

With the change in technology has come a change in lifestyle. Crabb now has two children, mostly works from home and because she no longer has a 7pm deadline, she has the freedom to file stories whenever she likes, which often happens late at night. She doesn’t even have a desk at the ABC so instead files stories directly to her editor Jonathan Green from her iPad, set up from wherever she happens to be working at the time.

The flexibility with word lengths for articles can range anywhere between three words and 3,000, Crabb claiming that “I file when I feel like there’s something to say.” She has an active presence on Twitter including a main account with a consistent 24,000 followers with whom she shares news, links and comments as they happen as well as the occasional pointers to delicious recipes. In between writing, Crabb talks to ABC radio across the country, participates in television program Insiders every couple of weekends, and does spots on ABC News 24 when they need her.

The beauty about the online space, says Crabb, is the immediacy of the reader response where you get the “kitchen table response. Straight away. Right in the kisser.” She speaks from experience, of course, through receiving countless comments from ABC Online readers and through the Twittersphere. On the other side of the coin, Crabb admits it can be quite maddening and as a writer reading those comments it’s not hard to feel terribly outraged. “Being publicly shellacked by people who have clearly only half-read your piece, or have never read anything else you’ve ever written, or who just hate you anyway, or who possibly are having a terrible day and have decided to take it out on you.”

But Crabb understands and accepts that these elements are part and parcel of the new media landscape. News journalism as we have known it in the past is over, or well on its way to being so. “Audiences are splintered, but demanding. They want new news, and if something complicated has happened, they want instant analysis.” And commonly, audiences also want an opportunity to express their own views and opinions – not only on the event itself, but on how it has been reported.

But it’s not the end of the matter, says Crabb, explaining that news is no longer about delivering a chunk of information, and that being the end of it. It’s more likely to be the beginning of something; something you can’t much control after pressing “Send”.

It is this loss of control that is the hallmark of new media, says Crabb. “For journalists, the loss of control is about the loss of centrality.” Where the community of news and commentary is getting stronger and more populous, journalists are not necessarily, automatically at the core of it any more. And they are open to criticism – some of it savage and worryingly accurate, she says. 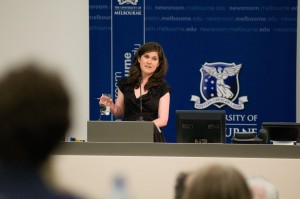 Our passive, profitable audience is disappearing. “In newspapers, which is where I come from, the panic is about advertising, of course. And how to monetise content online.” It is here, says Crabb, where we are in part victims of our own excitement and impulsiveness at a time where news organisations were on the race to win eyeballs online. With the rush to upload breaking news immediately online, holding them back from the print edition, has come a problem in determining how to charge for content. “And 10 years later, what do we have? Leading news websites, and an audience which has been trained to expect this stuff for free,” says Crabb.

In the past, audiences have always paid for journalism; through purchasing a newspaper, via tax funding for the ABC and through advertising. But now we are plagued with the fear that we shall never find another way of funding content because we have trained audiences to expect news online for free says Crabb. Millions of people who download iPhone apps ranging anywhere between 99c and $4.99 to play games have no problem with paying a tariff, yet the prospect of paying to read an article appears to be an entirely different matter.  Why, asks Crabb, does this disparity exist?

Why is it that the intellectual property of a journalist is suddenly worthless while app developers and the like have no issue warranting some kind of adequate remuneration? The problem is that journalists have already ceded the field, says Crabb. “We’ve already given our stuff away.” And while all of this is starting to change, it does make for an interesting debate. Crabb notes that it is important to take a hard look at what consumers and audiences would be paying for when they purchase an article. And she details it as buying the time, the research, and the writing of the journalist. “You’re buying a fraction of the 10 hours that that journo spent hanging around on the night that Kevin Rudd was knocked over, talking to people when you were asleep… You are compensating that journo, to a tiny degree, for the 10-minute bollocking she just copped from Paul Keating. Or Malcolm Turnbull. Or the CEO of some company.”

This goes for every journalist working somewhere across the media landscape in this country. Of course, Crabb sees the other side of the argument too, that in this day and age, information should be free. But she is also familiar with the concept of free information because it usually comes in the form of a press release, or an advertisement or because it’s so incredible banal that it’s essentially not worth paying for. “Free information, ladies and gentlemen, tends to be crappy information,” says Crabb.

This is why good information is expensive explains Crabb. “And it’s expensive because someone who knows what they’re doing has put some serious time into finding it out for you, or put themselves in harm’s way, or is sticking his or her neck out in some way to get it to you.”

And so we arrive here: “We generate a commodity that is expensive to produce, but we’ve talked people out of paying for it.” In essence, Crabb concludes that the media moguls have created this very hairy problem for themselves as they now scratch for a way to charge for content that, up until this point, has been available free of charge. And she raises an important question of how we try to work out how to charge for the content before working out how you make the content worth charging for – a difficult predicament indeed. Instead, in the panic of it all, we have carelessly overlooked the important questions such as how content can be more relevant and useful for our audiences.

The only way, Crabb reasons, is to create something new instead of simply dumping copy from the newspaper to online, and again to tablet sized devices. “Here’s a good rule of thumb, I reckon, for paid content: If you’re already doing it, don’t charge for it. If it’s something new, make it worth charging for.”

At time where finding readers is no longer a problem and where audiences have the power to self-select their information based on personal interests, there is an abundance of space for experimentation for content makers. And fundamentally, we need to view the digital or information age as an opportunity and not a threat.

Crabb says the problem for the hungry online consumer has become, with vertiginous speed, not “Where can I find news?” but “How do I hack my way through all this stuff to find what I want?” She notes that there could be a market in making sense of things. Traditionally news journalism has always had two roles; breaking news and sorting news. Then analysis comes in after that. But what if sorting news is just as important for the reader in this information rich era, asks Crabb? “What if the greatest service we can offer to a reader is a reliable pointer to what’s worth a look, both in our own mastheads and others?”

As with the jump to the online space, so comes this roiling time of change that must be a bracing experience. There are many positive aspects to working online says Crabb, including “the thrill of calling out and hearing an answering voice.” The medium offers the ability to get in touch with readers directly, take on board criticisms of your work, and congregate with new communities online – all of which are very human experiences says Crabb.

For journalism, human contact is still the key, as it always was. And according to Crabb, none of these new age devices will give you everything you need to be a good journalist. “But great journalism starts with knowing your community. And smart journalism will change with it.”

Guantanamo: My Journey by David Hicks

Coast to Coast is so much more than an Australian beauty brand. It is a spectacular homage to the diverse and breathtaking...
© Onya Magazine 2009 - 2021
Back to top