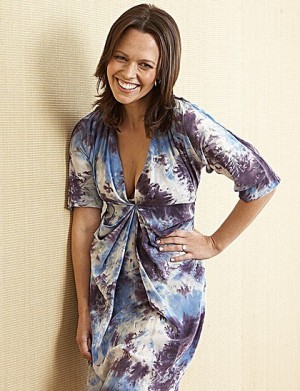 Lots of stories start with, ‘Once upon a time’ and end with ‘happily ever after’ – this one is no different – but it’s usually the story that takes place in between these lines that is the real reason we love a good fairytale. At a recent event hosted by women’s networking group, Business Chicks, guest speaker Mia Freedman told the 1000+ women in attendance how her story might have started and ended with these lines but that the journey that took place in the years between is what truly makes her who she is today.

Mia’s story begins, as most young girls do, by reading Dolly and Girlfriend magazines, dreaming of which clothes she’d buy if only she had the money, picking out who she had a crush on each month and learning about the ‘important’ things in life. At nineteen years of age, Mia undertook work experience at Cleo magazine where Mia’s mentor and then Editor of Dolly, Lisa Wilkinson, saw her potential. After her week was up, Mia found she didn’t want to leave and instead spent several months of her spare time hanging around the offices and working for nothing. ‘No one sent me home, so I just stayed’, she said. Mia was soon offered the role of Beauty Writer at Cleo, a job which led to Beauty Editor and would, in time, lead to the Editors chair.

At this point, Mia set herself a goal of being the Editor of Cleo magazine before she was 25 – an ambitious dream for the new girl on the block. While she wouldn’t become the Editor of Cleo until 2003, Mia was appointed Editor of Cosmopolitan magazine in 1996, just shy of her 25th birthday – the youngest person to have held the job to date. After spending five years in the magazine industry, Mia was uncomfortable with the messages the glossies were sending to young women and her initial focus as Editor was to change these messages, mostly related to body image. This led to the publication using larger girls, coined ‘real women’, in their photo shoots and a subsequent backlash from the skinnier girls with cries of ‘we are real women too’. Starting the Cosmo Body Love policy in 2007 is one of Mia’s proudest career moments. The policy banned diets and featured women of all skin colours, shapes and sizes, from 6- to 16, in every issue. Mia says diversity, empowerment and reality were her editorial mantras during her time as editor of Cosmo.

As typical fairytales go, every story has a climatic moment and three months after starting as Editor at Cosmo, Mia’s came when she fell pregnant with her first child. Swearing black and blue she would be back at work as soon as the nurse caught the baby, Mia prepared for the next challenge in her life, motherhood. But as all mothers will know, nothing can prepare you for the way a baby changes your life and Mia was no different. Having given birth to son Luca, Mia returned to work after four months, still unprepared for how she would feel being separated from her child.

Mia worked on Cosmopolitan for seven years (during which time she included over 100 sealed sections in her mag – in her words, ‘that’s too many!’), before being promoted to Editor-in-Chief of Cosmo, Cleo and Dolly in 2003. At the time, the magazines under Mia’s leadership reached 72% of Australian women and while Mia taught these women so much about themselves, they also taught her about what actually makes women happy.

After the birth of her second child, daughter Coco, Mia left the magazine industry and moved into television production at Channel Nine, working with Eddie McGuire on a new program, The Catch Up. In a male dominated environment (Mia tells us about her breast milk being in the staff fridge next to the VB), Mia struggled to find her place and after just 100 episodes of the chat show, chose to leave the network and travel overseas with her husband and children. Feeling unhappy and stressed, Mia relates the Channel Nine experience to that of an emotionally abusive relationship, an awful experience that she never wants to partake in again.

With the birth of her third child in the years after the Channel nine debacle, Mia found herself at a loose end, feeling that her self esteem was tied to what she did, not who she was, and that if she didn’t have a corporate job, then who exactly was she? The serendipity of this realisation led to the launch of her website and blog, mamamia.com.au, a direct line of communication to like minded women around Australia. Initially founded as a way for isolated women at home to share stories and stay connected, mamamia has found its audience by being authentic and honest. Mia focuses on her own stories, strengths and weaknesses, always relating to her audience and bringing issues that affect them to their attention.

Mia was recently appointed Chair of the Federal Government’s National Body Image Advisory Group and is the voice of Australian women through the user generated content on her website. In the 12 months after launching her website, Mia has clocked over 1 million page views and receives over 5000 comments per week. Mia regularly appears on the Today show and writes a weekly column for The Sunday Age newspaper – all stories about how her ‘regular’ life is just like that of the average woman at home trying to balance her life, children and a career, along with everything else that comes along.

Mia realises the importance of having that balance and still says it is a daily battle where everyday tasks need to be weighed up individually and where small successes should be celebrated. Juggling too many balls might result in one of them falling, but, Mia says, they aren’t made of glass and won’t break – pick them up and keep going. Make mistakes, own them, learn from it and move forward. Today, Mia is living her happily ever after and says the best advice she can give to women today is to be kind to yourself.

Everything Mia has gone through over the past 15 years of her life is reflected in the lives of the women in attendance at the Business Chicks lunch. Women who might be struggling to manage their career and family; women who want to have it all and perhaps think that they can’t; women like me who have a goal and want to know that dreams do come true. Mia’s story isn’t perfect – no ones is – but it is the ups and downs of her life that make Mia the woman she is today. Her ambition, strength, determination and confidence make her an ideal role model for the women attending the lunch, and an inspiration to women all over Australia.

Great piece Sarah!
I look up to Mia (as many other women do) but especially because I want that journalism career working across magazines/newspapers and online. I think she is a great role model for such a wide range of females. Thanks for sharing her story.

Mia is such an inspiration. My first insight into her personal and professional life was when I read Mama Mia and ever since, she’s been my role model. Not just because her career was all about the gloss and glam, but more so because she dared to dream. She accepted life challenges with open arms. And look where she’s now.

The Onya Magazine Beauty Department showcases the style, quality and luxury of the Australian beauty industry. Our articles...
© Onya Magazine 2009 - 2020
Back to top