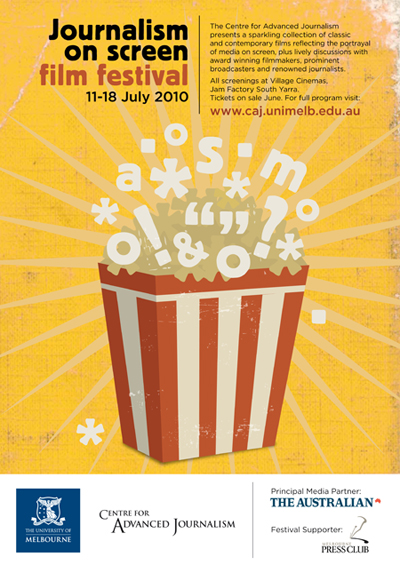 For lovers of journalism and the exciting world of media, this event combines engaging forum discussions on media topics complemented by an array of films featuring a journalism theme.

The Centre for Advanced Journalism is hosting ‘Journalism on Screen Film Festival’ at Village Cinema’s Jam Factory, in Melbourne, from the 11th of July until the 18th of July, 2010.

The festival will showcase 17 powerful and influential films that represent journalists and the nature of working in the media, and will give viewers the opportunity to explore the way journalism has been portrayed on screen throughout cinema history. Highlights of the festival include All the President’s Men, Network, Balibo, His Girl Friday, The Soloist, Sweet Smell of Success and State of Play.

In addition to the film program, a selection of films will be the focus of key discussions presented by some of Australia’s leading journalists, broadcasters and filmmakers. Each forum will explore a theme and include topics such as ‘Journalism: A Love Story’, ‘Ethics in Reporting: Don’t let the facts get in the way’ and ‘Covering Conflict: To Die For?’

Director of the Centre for Advanced Journalism, Michael Gawenda, says “the festival presents the chance to spotlight some great examples of film with a journalistic focus. We have programmed a week of terrific cinema as well as lively discussion forums with leading broadcasters and filmmakers”.

The Festival’s Opening Night Showcase, on Sunday 11 July 2010, will present a unique opportunity for audiences to see what many consider the finest film ever made, Orson Welles’ 1941 masterpiece, Citizen Kane.

Tickets are now available to purchase online at: www.villagecinemas.com.au or;

Image thanks to: Centre for Advanced Journalism

Animal Kingdom is something of a phenomenon in Australian cinema. After winning big at the prestigious Sundance Film...
© Onya Magazine 2009 - 2021
Back to top