As part of their Chancellor’s Lecture series, Swinburne University hosted a seminar on journalism last week. The discussion particularly looked at the future of journalism in the digital age and the challenges that the growth of the Internet and the decline of advertising revenue bring with it. It’s no news to us that the emergence of the digital environment poses a threat to traditional media platforms and the lecture only touched on the ways in which we can embrace and adopt new money making models for the future. Perhaps the conclusion here is that we do not yet know what the future holds. And according to the speakers, the upcoming generation of journalists will carry with them the responsibility to create the new business model from which journalism can continue to flourish.

The lecture Journalism in the Digital Age posed many questions and sparked debate on an issue we don’t necessarily have all the answers to right now. The first speaker, Dr Margaret Simons, challenged the listeners to think about what the public is interested in and how can we cater to the needs of an audience. As an award-winning journalist and the chair of Public Interest Journalism Foundation (PIJF) Simons described the current media model as “broken or under stress” and stated that the once strong relationship between journalism supported by advertising is quickly on the way out. “Publication is not the problem, financing it is,” she said. 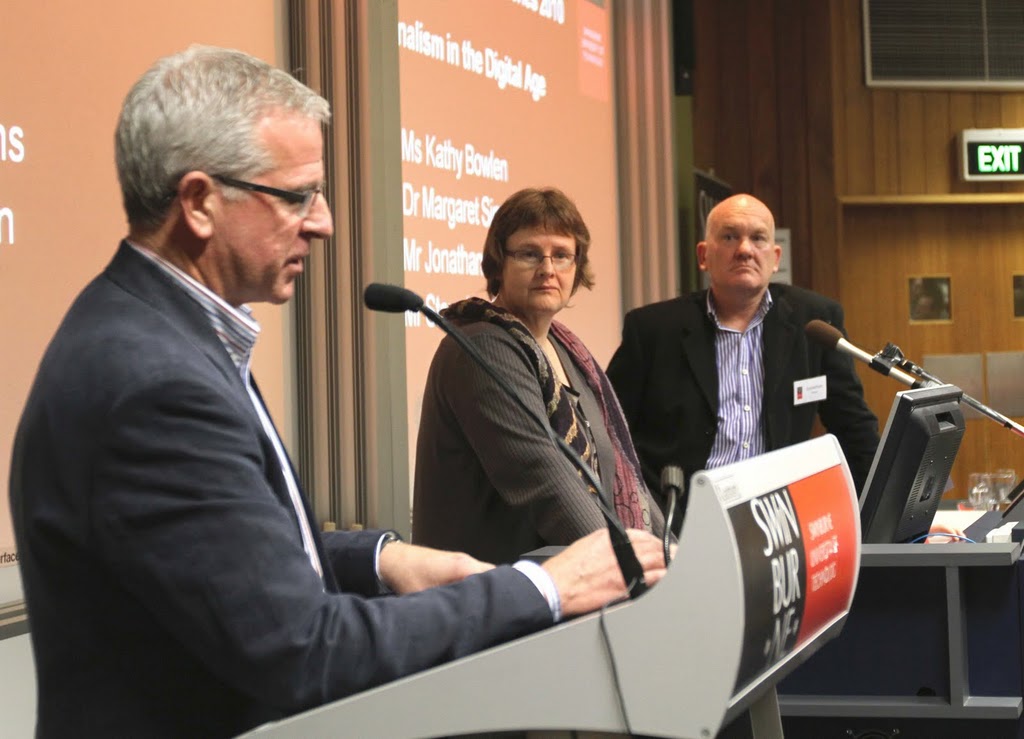 Simons believes that it is equally an exciting and frightening time to be involved in journalism. The Internet brings with it new opportunities to experiment with projects and new ways of disseminating information to an audience. “Newspapers have seen revenue move to online sites. And while mainstream media organisations have also set up their own websites, revenue from online advertising cannot sustain high quality journalism. “There is, however, no evidence of a declining appetite for news and information. Never before has there been so much media choice, or such need for quality information and debate. Thanks to the Internet, it’s a time of great challenge to journalism, but also freedom and possibility,” she said.

Simons described the current shift of moving into the technological revolution similar to that of the time when the printing press was introduced. It changed many ways of doing things but also opened up new possibilities. And this, she claims, is how we should approach the future. Simons predicts that new publications may be smaller and perhaps less profitable and less powerful than the large dominant media organisations in practice today. But these publications will be more intimately connected to their audience, relating to and interacting with them closely.

Simons spoke about a new model of delivering news called YouCommNews by crowd-sourcing funding as a commissioning mechanism. It is based on the same model initiated by the Spot Us project where the public can commission important and overlooked stories and donate money to fund the research, investigating and reporting. Referred to as “community powered reporting” the model is a nonprofit project where contributions are tax deductable and is partnered with news organisations to distribute content under appropriate licenses. This concept reinforces the notion of developing a more direct and collaborative relationship between professional journalists and the audiences they serve. The key question Simons asked in relation to this was “how much will people pay and what will they pay for?”

Mr Jonathan Green, editor of the new ABC online opinion and analysis site The Drum, and former editor of Crikey also spoke at the lecture. For new media, Green believes that journalism is the thing that has to be sustained because there are great opportunities and qualities in the craft. The challenge is to find that fine balance between delivering news in an effective way to an audience that wants to consume this information. “Paying for content is not necessarily the answer. There are cultural issues in journalism too,” said Green.

Green stated that media models are currently working in a self-serving way. With the rise of the Internet as an interactive medium where journalists can directly communicate and receive feedback from their audience, the power is shifting from big media organisations dictating news to collaborating and responding to the needs and wants of an audience. “Journalism may not be the ‘be all and end all’ of investigating, gathering and disseminating information,” said Green. We have seen examples of this currently at work as crowd-sourced funding indicates the news agenda and when “citizen journalists” contribute to important items of news. This shift may see a new method in the way journalists work and source their information. 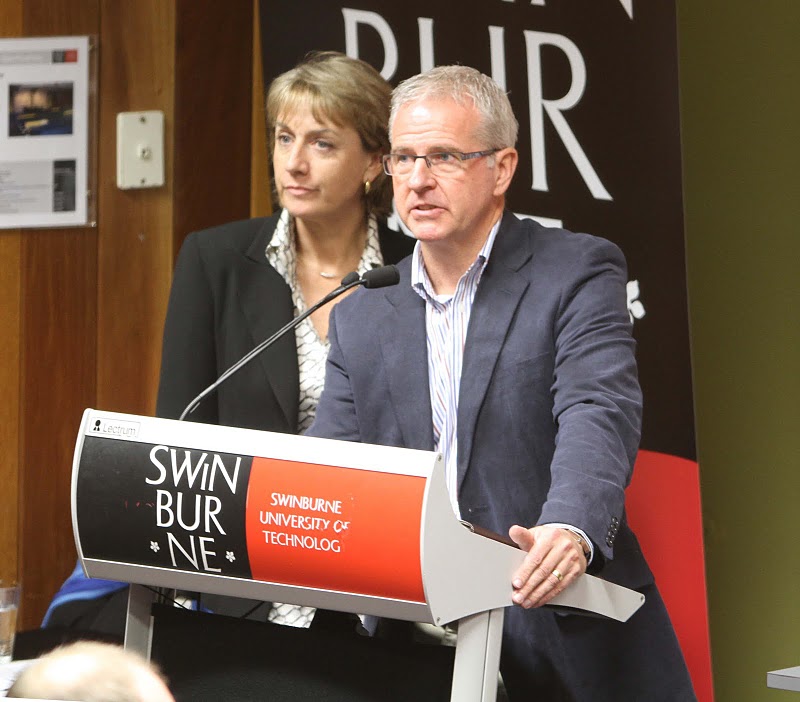 Former CEO of The Age and senior Fairfax Media and News Ltd executive, Mr Steve Harris, discussed challenges and opportunities for traditional media. He claims that today we have more information than ever before yet we still have a need for credible, trustworthy information. “The digital environment simply fast tracked the pressure question,” he said. The inevitable change was bound to happen sooner or later but he believes that the fundamentals that underpin journalism, and always have, will continue to do so. “As long as there’s a need for good journalism, there’s an opportunity,” said Harris.

Harris posed an interesting question during the session, suggesting that for new media models to be effective, the information delivered will need to do more than what it’s currently doing. “What journalism better helped you understand climate change or any other big issues?” he asked. The need for good journalism in the future, he says, will be to sustain democratic analysis and discover what is relative to an audience and their needs. “The Holy Grail was objectivity. The new Holy Grail is transparency,” he said.

Quality assurance was also a major concern, as amateur “citizen journalists” and an increasing amount of bloggers enter the digital environment. Harris described comparing the credibility of news sourced from The Australian newspaper, as an example, compared to popular blogs. We know that qualified journalists have researched, written and delivered news to the highest quality possible but can we still expect the same level of credibility with blogs on the Internet? And does the speed of the Internet mean that we are compromising the quality of a well-rounded story? Harris suggested that the problem with the speed of delivering news at such a fast pace simply puts more heat on a topic instead of shedding light on an issue. Does this mean that an audience fails to fully comprehend an issue?

A lot has changed in the media industry for journalists over the past twenty years. Expectations and responsibilities have grown vastly and a different skill set will be required from the journalist of the future.  According to Harris, journalism may become more so an “activity” than a “profession”. While Harris agrees that there is a constant search for a new revenue stream, online communities are active and so engagement with them is more direct. In moving forward, journalists will need to encourage audience participation and discussion on any given topic.

Great article!
There is indeed a potential for over emphasis on the audience “individually” due to online interactivity. News is not always “what we want to hear” as individuals, yet most often what “the collective needs to here”. The traditional role of the off line media was amongst many things, one of guidance and providing information that didn”t necessarilly make it’s audience “feel comfortable”
As Harris alluded to, the change in responsibility to ones audience is the key issue for the future of journalism in general.
Thanks for the insight into current thinking!

Very interesting- there are definite changes in the media sector & probably more to come in the future. This brings about many pressing questions for journalists today as we face the digital world that we live in. I really like the quote -” Publication is not the problem, financing is”- how TRUE!