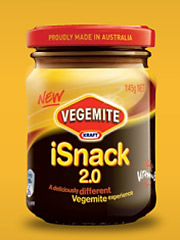 With our feet firmly planted in the 21st century, we are all racing to keep up with the rapidly changing ways of society. So it is no surprise that some of our most cherished and beloved flagship products are working harder and faster to maintain momentum.

But what happens when we try to bring our cultural icons into the modern age?

In the same way that Vegemite originally got its name in 1923, Kraft launched a competition in July to label the new hybrid cheese-vegemite flavor. The modern day version ensured mass publicity, and 48,000 entrants later, West Australian web designer Dean Robbins was announced with the winning name during quarter time of the AFL Grand Final. ‘iSnack 2.0’ was launched and Vegemite’s stronghold as the ultimate Australian product quickly disintegrated.

A clever marketing ploy gone awfully haywire, in a swift turnaround, public backlash ensued. In a matter of hours, consumers had taken to the Internet to express their iDisgust, with the tag ‘#vegefail’ becoming a trending topic on Twitter and renaming attempts including ‘iSuck 2.0’ making their way onto t-shirts within days. Perhaps the Australian public quickly realised that the tune ‘we all enjoy our iSnack 2.0 for breakfast, lunch and tea’ didn’t really have the same ring. Certainly not the upgrade Kraft was hoping for.

Kraft claims the name was chosen “to align the new product with a younger market — and the cool credentials of Apple’s iPod and iPhone.” Unfortunately for Kraft, forgetting that Vegemite is a food product and not a downloadable Internet application may well be an extreme failure that could prove to be one very messy mistake. Although they may be working by the old proverb ‘any publicity is good publicity’, consumers seem hardly bedazzled by this new cheesy moniker and have been left wondering – if the name is any revelation of Kraft’s taste, how bad is the product itself?

The popularity of vegemite is arguable, its identity is not. A uniquely Australian food, it has maintained gag reflexes and introduced never before experienced levels of salt intake to a mostly obliging public. It has also become a necessity for travelling Australians. I have personally had the wonderful opportunity of introducing this “chocolate spread” to many a naïve foreigner, launching a chain reaction of a thousand facial expressions and countless hours of my own personal entertainment. The decision to make Vegemite ‘hip’ and ‘modern’ echoes the earlier unappetising failures of Cadbury whose attempts to change their beloved chocolate recipe was met with a very unreceptive customer response.

Kraft also wins no awards for the originality of its new flavor, as the vegemite/cheese combination has existed for years in many a primary school child’s lunchbox. So while the new style is neither original nor groundbreaking – the naming decision is simply perplexing. I can only conclude that this is Kraft’s way of admitting defeat to Bakers Delight, who claimed victory on the ‘cheesymite’ logo several years ago.

As for the product itself, Kraft asserts that it is “deliciously different” and I will leave it up to your own taste buds to decide. However, should Kraft concede to popular opinion and decide to rebrand this marketing disaster, I am very happy to offer my own suggestion:

I certainly hope Kraft will quickly recover from this mistake. But, unfortunately for now, I will be having a very hard time convincing anyone, naive or not, that iSnack 2.0 is really an off-colour chocolate spread. Now, where’s the fun in that?

Editor’s note: As this article was being published, breaking news came to hand from Kraft Foods Australia/New Zealand:

“Since the announcement of the new Vegemite name at the AFL Grand Final, Kraft Foods has heard consumers’ like the taste; they just don’t like the name.

Kraft Foods Australia/New Zealand Head of Corporate Affairs, Simon Talbot, said: “We have been overwhelmed by the passion for Vegemite and the new product. The new name has simply not resonated with Australians. Particularly the modern technical aspects associated with it.

At no point in time has the new Vegemite name been about initiating a media publicity stunt. We are proud custodians of Vegemite, and have always been aware that it is the people’s brand and a national icon.”

…No publicity is bad publicity…

Hope you don’t mind but I’ve linked to it at the end of mine, as a point of additional reference. the link is above!

By Glenn Dunks Some readers may be surprised to learn that Mao’s Last Dancer is indeed an Australian film. Being set primarily...
© Onya Magazine 2009 - 2021
Back to top