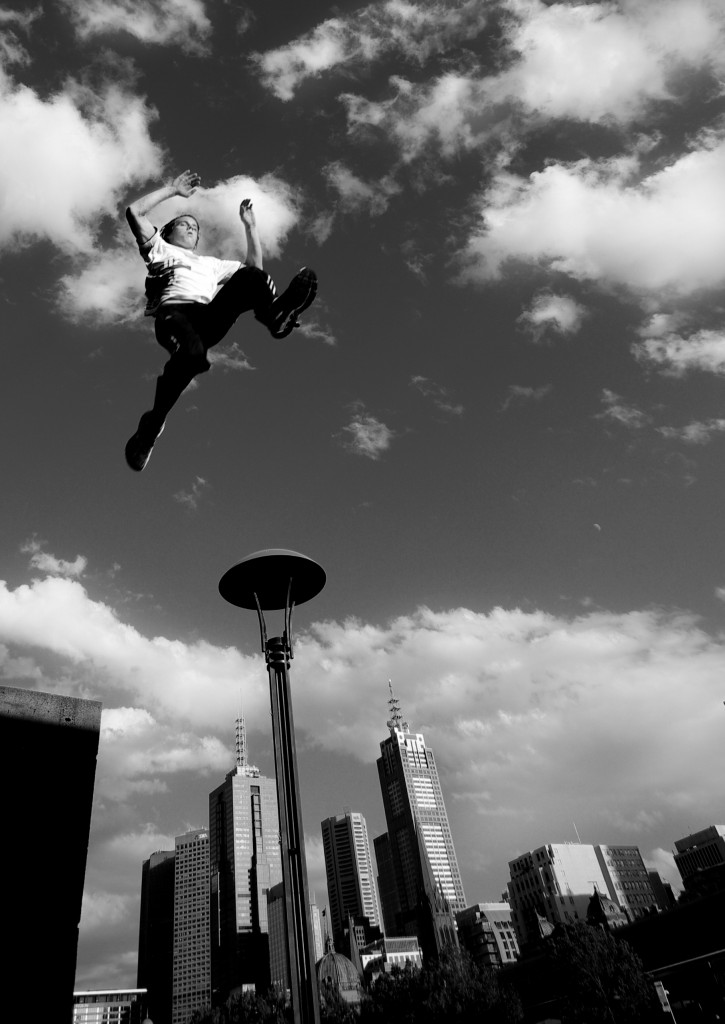 At high school my mates and I had a hobby that we called ‘bush jumping’. Despite being rather simple in nature we tried hard to make it into a discipline. Firstly, the right type of bush needed to be found – too branchy and we could get stabbed in the chest, too soft and it wouldn’t be strong enough to cushion our weight. Once found we then jumped into it. The hobby was relatively short lived as it escalated very quickly – a gentle flop into a lowlying boxwood gave way to leaping off a roof into a well manicured honeysuckle. Though I’m thankful we gave the idea up before anyone was too seriously injured, I have often missed the excitement of climbing, jumping and feeling extreme in an urban environment. But then I found out about Parkour.

Harley Durst, an instructor with Australian Parkour Association describes the discipline as:

‘A method of strength and fitness where you are aware of your limitations in your environment’.

It involves overcoming obstacles and getting from A to B in the most efficient way possible. If you’ve seen the chase scene at the start of Casino Royale then you would have some idea of what it’s about. Jumping fences, climbing walls and leaping down stairs might seem rather juvenile, and inline with BMX or skating, but its philosophy and raison d’etre sets it well apart.

“Parkour is about being strong and being useful. We train in conditions that are tougher than you would face but this makes it easier when you need to apply it in real life. This could range from helping your neighbour shift furniture to more extreme examples of running away from a threat late at night,” says Zeke Beilharz, another instructor.

The seeds of Parkour were sewn when Georges Herbert, a French Navel officer, witnessed African Tribesmen on his journeys with the navy. He was astounded by their strength, flexibility, endurance and gymnastic prowess. Upon his return to France, Herbert developed what he had seen into a discipline to train army officers. With a Swiss architect he then designed the Parkours de combattant – the obstacle course training method, from which the discipline took it’s name. In the 1990s Parkour became popular with youth in Paris and it spread throughout the world. In 2006 the Australian Parkour Association was formed and it has training sessions in all major cities. 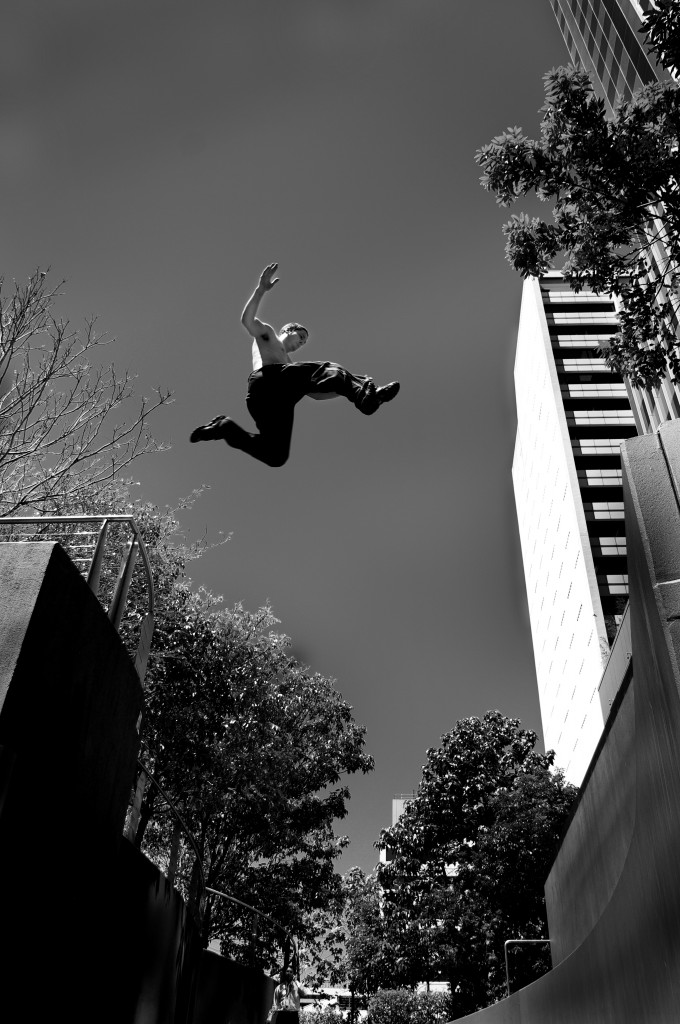 Due to the practical nature of Parkour, all moves have a purpose so any flips or unnecesary fancy looking spins are made redundant. Races and rivalries are not encouraged as these can lead to traceurs (the name given for people who do Parkour) attempting moves that they are not ready for. And unlike other extreme sports it is not designed to be a watched from a TV– everyone is encouraged to give it a go.

With this in mind I attended a public training event held in a Melbourne mall to try it myself. The instructors started with detailed explanations of how the basic moves were performed which we then  put into practice. Before long we were able to leap over vaults, walk along poles and launch onto a scaffolded wall with some finesse and only minor injuries along the way. The strength session which followed was less intimidating but infinitely more painful. Bicep and core body muscles are vital to a traceur and the instructors were determined to give them a solid work out. I cannot imagine that anyone could do parkour for a good length of time and not get awesomely fit doing so.

Unfortunately, in my everyday life I am more likely to scroll down a Facebook wall than climb up a real one – so the usefulness of Parkour might be lost on me. But as far as fun and active things to do go, it sure beats jogging for excitement, and it has a lot more man points than gymnastics. What’s more it is also a lot kinder to the plant life.

To find out more about Parkour, please visit the Parkour Association of Australia website.

The Building & Climbing of Bridges

I’m a sniffer and have been for as long as I can remember. I smell clean laundry straight from the washing machine and line...
© Onya Magazine 2009 - 2020
Back to top